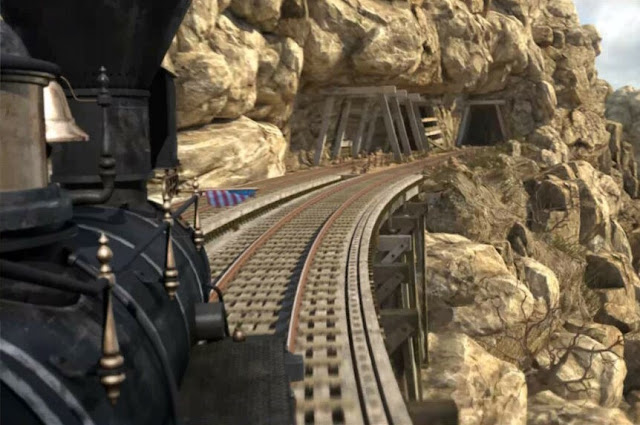 Finally, the Nintendo Switch has a simulator of a reasonably high production standard and is also enjoyable to play on the console. Finally. There have been a number of very good smaller simulators by indies (Project Highrise, for example), but the one really big fish effort to do a simulator on the console previously – Cities: Skylines – crashed hard. That is not a good port of a very good game. Railway Empire makes up for the waves of disappointment I feel every time I look at Cities on the console, though.

So something to note regarding the Switch port: Firstly, obviously there is a drop in visual quality when compared to the PlayStation 4 and PC versions. Railway Empire features very big maps and there’s a lot of data that it’s crunching in the background. There’s just no way the Switch can render that much data and complexity without making compromises. It is, however, still a good looking game on an aesthetic basis, and the underlying appeal of simulators – watching what you build grow and thrive – is very much there and in place.

At the start of a Railway Empire campaign, you’re looking at a pretty featureless map. There are some villages dotted around the place, and some farms and other sources of materials and resources. Your goal is to link the farms and resources to the towns, and then link the towns together to facilitate the moment of people around. Do that well and you’ll end up watching the cities grow and become very busy indeed.


If that all sounds quite “hands-off” with regards to the building stuff, that’s because it is, and I love Railway Empire (and other transport simulators) for that. These games crystalise the value of having robust transport systems for the growth and health of a community, and that’s something that’s too easy to take for granted and forget in the world that we now live. Railway Empire is a little more limited than some other simulators in that you are focused exclusively on trains (late last year Transport Fever 2 was released, giving you control over shipping, roads and rail, for example), but it nonetheless does a good job of modelling that specific form of transport and the impact that it has had.

There is plenty to manage, though, don’t think that isn’t the case. When you’ll start you’ll have access to only the most simple train engines, but as the game goes along you’ll be able to research more powerful trains that run faster and work more efficiently. You’ll also need to manage the budget, as train lines are expensive to maintain and trains eventually need to be replaced. And you’ll need to manage the placement of tracks and trains so that you can have multiple trains using tracks without crashing or otherwise running poorly. Basically, if you’ve ever had a toy train set, you get all the appeal of carefully designing track systems, with the added challenge of coming in under budget.

There are also AI opponents in most game modes, forcing you to work quickly lest you be pushed out of the market via their aggressive growth strategy. This forces you to really take risks with your budgets and expand as quickly as you can, which helps to make the game feel dynamic and energised. You’ll also be competing with those AI opponents in auctions and other business-related challenges, and the various AI opponents all have their own skills and preferences, adding more variety into each individual game. 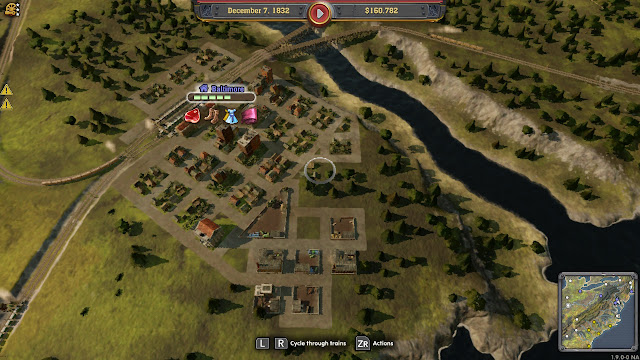 I also love how customisable the challenge level is in Railway Empire. You can make it a complete cakewalk if you like, simply by giving yourself huge amounts of starting collateral and giving your opponents very little. As you get better you’ll probably want to challenge yourself more, and the difficulty curve is beautiful, to the point that you really will start weighing up whether it’s worth your while to expand to another small village, given how long it takes for those things to become profitable centres for your train network. Railway Empire is a game that’s surprisingly easy to learn, and you’ll be comfortable with playing it within the first few hours, but there is plenty of depth there for people that want to challenge themselves and enjoy a greater sense of reward.

The Nintendo Switch version of Railway Empire comes with a number of North and South American maps unlocked and ready to play. Unfortunately, there are also three European maps that are locked away as DLC, and I do feel that the publisher could have acknowledged that the game released late on Switch and was a visual downgrade by making the release a “Complete” edition with all the DLC included off the bat. That’s how other developers and publishers have handled the “last on Switch” issue. You will want that DLC, too. The European maps are excellent.

There’s not much else to say beyond what was in my review of this game on PlayStation 4. The Switch port is a high quality, highly functional version of the base game, and while there are some totally expected visual downgrades, this is offset by the fact that you can now play Railway Empire on the go without having to lug your laptop around. When it comes to the kind of experience a simulator offers, the portable form factor really is is the ideal way to go.