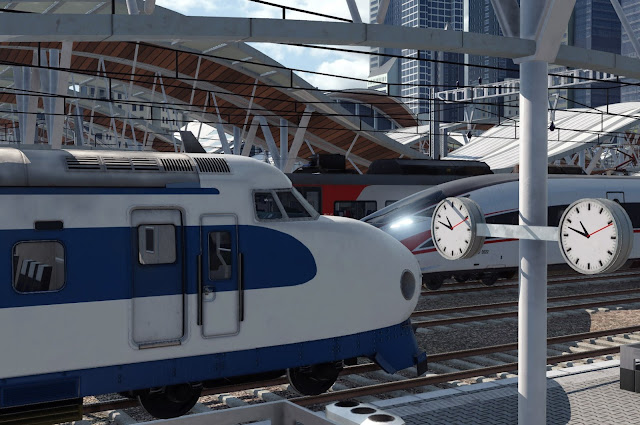 I have one issue with Transport Fever 2, which I’m going to throw into the introduction, so I can then talk about everything that I love about this game: unlike most other transport business simulators there are no rivals, AI or player. In Transport Fever 2 you’re guaranteed a monopoly, and in doing so it does feel like some of the excitement of executing a great plan is lost. With that being said, the more you dig into Transport Fever 2 the more you realise that it isn’t really trying to be a business simulator at all, so let’s talk about what it is.

Related reading: Another good alternative, for those looking for the competitive element, is Railway Empire. Our review.

Transport Fever is a celebration of how beautiful public and mass transport systems can be. This will be foreign to most fellow Australians (and from what I’ve experienced and heard, Americans and Brits), given how brutally our governments run everything that doesn’t involve driving a car into the ground, but bear with me here and use your imagination. Those of you that have been to countries like Japan, Russia, western Europe and China will know what the score is. The transport system of a town or city really drives the growth in the city, by facilitating the movement of goods and services well beyond what can be achieved by relying exclusively on cars, trucks, let alone moving on foot. You’ll start a map with a blank slate. There will be little villages dotted about the place, and each of them will have little icons above them, indicating a couple of different types of goods that the town desires. Those products are created from networking up a chain of mines, farms, and factories that you then need to arrange logistics to get the completed goods into town.

Nothing happens in those villages, until you start building transport infrastructure in them and fulfilling the needs of the village. It’ll start small – you might be able to get one refined good into the town, and construct a small network of buses to help people get around. In doing so, the town will start to naturally develop around what you’ve done. If you’re supplying industrial goods, the city’s industrial area will grow. If you’re focusing on more commercial goods, the town will start to become a shopper’s paradise. And houses will build up around where people can access transport to get themselves around. 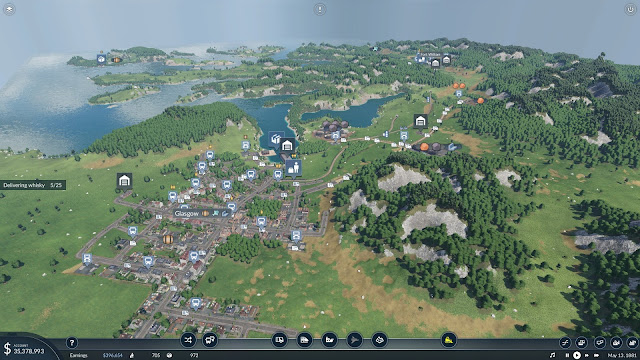 Do this well and you’ll be bringing in revenue and profit, which you might then use to build a passenger rail line to a nearby city, fueling the development of both cities. Building further to bring goods into that second city, you’ll connect the two of them via a cargo line and suddenly both locations are thriving. Perhaps one of them is located on the coast, giving you the opportunity to start transporting goods from great distances via boat. You might start playing in the 19th century, where horse-drawn carriages are a dominant way of doing things, but eventually airports will open up, and you’ll have no fewer than four different types of transport – road, air, water and train – connecting an increasingly connected and growing series of cities. Meanwhile, those cities that you haven’t connected will remain stagnant and tiny.

It’s a poignant message and reminder that transport builds communities, and Transport Fever makes that process more attractive than most. You can jump in for a ride in any of the vehicles you own on your network, and the street-level view of the city is gorgeous to watch grow over time. Little brick houses slowly transition to become soaring skyscrapers, and those one-platform train stations that are initially enough to service the entire community grow into hubs of an impressive scale equivalent to Tokyo Station or other great feats of transport engineering. With any city builder, the real joy is in watching everything grow organically from your decisions, and I’ve found myself preferring these kinds of transport simulators to the direct city builders, because watching the influence of transport networks in the growth and development of a city is fascinating and, at times, unpredictable.

With the absence of competitors, Transport Fever’s challenge comes from more traditional simulation bugbears – keeping what you’ve got profitable. The first time I played there were two cities that wanted brick resources that were “close enough” to one another, as well as a brick factory. So I decided to build a two-platform cargo train line. What I hadn’t accounted for was that one of the cities was on the far end of a very long mountain, and before I knew it I had borrowed an awful lot of money from the bank to get that second line in. The result was a train line that made good money, but I was hemorrhaging cash and at that time, trains were very slow indeed, so they weren’t able to transport the goods fast enough to cover the loan, let alone generate a profit. Meanwhile, the small bus network I had established in the “main” city had got to the point where the horse-drawn carriages were getting old, slow, and needed replacing… 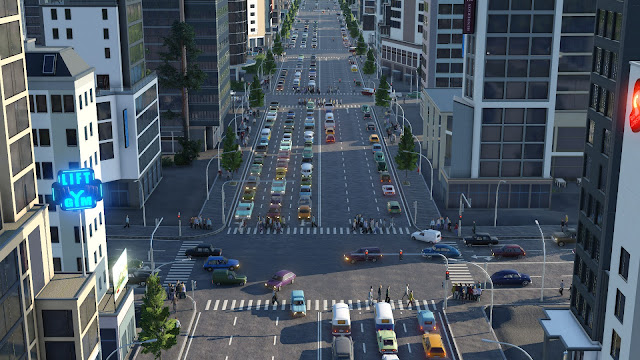 I needed to restart that one. Later on noise becomes an issue, and then pollution does. Cities that become too busy lose interest in using your services and then it becomes difficult to fill the existing transport vehicles. I’m sure you’ve heard that airlines don’t make much of a profit per passenger, and therefore effectively need to be filled to capacity for the flight to turn a profit overall? Margins in Transport Fever are slightly less realistic (i.e. better) than that, though it’s still tight enough that you won’t be able to afford too many loss-making areas.

Related reading: For a different kind of simulation, just recently released, be sure to check out Planet Zoo. Our review.

As with any good simulation, there are a lot of data feeds going on in Transport Fever 2, and while the interface is enjoyably clean, remembering how to make good use of it all is still a process. Thankfully there’s a lengthy campaign mode (with a surprisingly amusing sense of humour in its storytelling), which is careful, patient, and teaches you all the systems in a logical, efficient manner. There have been other transport network simulators (A-Train), where I’ve felt overwhelmed while learning the ropes, but with this one the developers clearly thought very carefully about the on-boarding process, while making sure that those campaign stages were entertaining enough that you’ll want to play through them. The side-missions within each campaign mission, for example, are there purely for laughs, with my favourite being one mission where you needed to design a route to look like a pentagram at a “mystical” place on the map. With most simulators I beeline straight for the sandbox mode, but with this one I did play through the entire campaign.

I can’t think of a single thing that truly disappointed me about Transport Fever 2. It’s elegantly presented and understands that some efficiencies are required for the sake of playability – for example, in a game like A-Train if you’ve got two or more trains sharing a track you better be good with designing timetables, but with Transport Fever 2 the game automatically makes these calculations for you. At the same time at no stage does this game insult the intelligence, and nor does it let you off the hook if you make mistakes. Ultimately, as with any simulator, the core requirement is that you’re able to watch your efforts grow with pride, and I tell you what, of all the sims I’ve played this year, I’ve loved zooming right down to monitor the successes of my work at street level more with this than anything else.

Game of the Year 2019! Xbox One release of the year