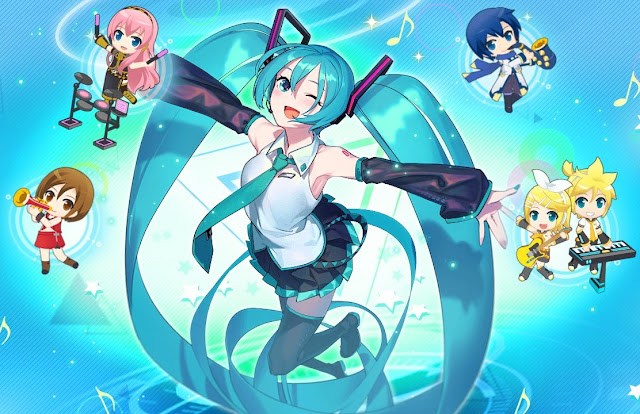 There’s a Miku game that even I can’t defend.

Hatsune Miku – Tap Wonder – MikuTap, as the developers would like to have you affectionately know it as. What a disappointment this thing is. We’ve had some excellent Hatsune Miku games on iPhone in the past. SEGA published a brilliant set of rhythm games that, right up until the day they dropped off the App store from no longer being supported, were well worthwhile. The Miku “Picross” that’s available on iPhone right now (Mikulogi) is also excellent. But MikuTap… wow boy does this game try hard to crush the spirit of even the diehards.

This is one of those silly “clicker” games. The concept is that Miku’s giving a concert, and your job is to tap the screen to cheer her on. As you cheer you get “voltage points” (or whatever other inane name they use), and those can level up Miku and unlock Miku’s Vocaloid buddies to join her in concert, which means that you’ll be collecting these voltage points faster. That’s important because every so often a “super concert” special event pops up, asking you to accumulate a certain number of points within a short time. When that happens you’ll be frantically whaling away at the screen and hoping that you’ve levelled up everything enough that you can hit the points threshold and progress.

This one features #HatsuneMiku in the original costume design by renowned illustrator Oguchi @Ogch!
👗✨
There are lots of costumes in #MikuTap, find your fav and enjoy Miku’s concerts in style🎤

Then you need to collect new costumes, items and pets for Miku, all of which will help you accumulate points faster. And through all of this you can, of course, spend real money to get stuff faster, get rarer stuff, and make progress more quickly. Why would you want to make progress? I don’t know. There’s no actual purpose to the game and MikuTap is weirdly complicated about its systems for a clicker game that basically plays itself, but it is what it is and clicker games do have a strange ability to draw players in for reasons I’ve never quite understood. I assume this one will somehow end up with an audience too. Perhaps as a society we’ve all degenerated so far that mindlessly tapping on a screen really does meet our needs for entertainment?

Now, look. The presentation of MikuTap is nice enough. Of course it is. It’s Hatsune Miku for a start, for crissakes, and the little chibi sprites of her in the game are adorable. All the costumes you can dress her up in are great as well. There’s even a swimsuit it seems, and we all know how much I enjoy dressing Miku up in swimmers. Then there’s the pets you can earn include Yukine, Miku’s canon snow rabbit pet. Somehow, even though Yukine is adorable, he hasn’t managed to turn up in anywhere near enough games and merchanise in the past, so it’s a genuine delight that he’s actually in this one. Finally, of course the “game” features Miku music, and that means you can enjoy the voice of a digital angel delivered right into your ears.

Actually, if I’m being totally honest here I can see value in Miku Tap. The next time someone decides to play woefully grating, irritating rap or R & B music through their phone speakers on the train or other such public space (and I dunno about where you live, dear reader, but here in Australia that is a frequent occurrence, as the typical bogan in this country lacks any sense of social manners), I’m going to conveniently decide to start playing MikuTap without headphones on. I’ll give them an education in what good music actually sounds like in such a way that not only can they not complain, but they won’t be able to even argue that I’m being passive-aggressive in playing loud music to counter their crap… because I’m not “playing music,” see? I’m playing “a game.” 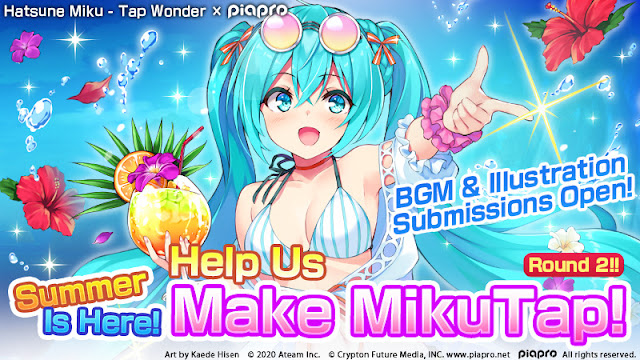 You’ve probably come to the conclusion at this point that I’ve run out of things to say about MikuTap. Why else would I go on a stream of consciousness digression, after all? It’s true. I have. MikuTap is a clicker game that got me playing it exclusively because of its license. And the most annoying thing is… let’s all face it, I’m probably going to keep playing it. It’s Hatsune Miku, and when I’m not in the mood to pull my Switch out to play Mega39s, there aren’t many options on the phone for Miku fans right now. Crypton, the owner and license holder of Miku, did a great job getting that Picross thing on iPhone, but clearly, the team is otherwise struggling with its digital strategy and engaging with fans of the digital diva through their phones.

Here’s some advice, Crypton. It’s a free consultation because I love Miku and I want to see her presence on mobile be truly worthy: we want rhythm games. Hatsune Miku is a digital musical instrument. The rhythm game thing is a no-brainer. Otherwise, the appeal of Miku is in the characters. Give us a dating sim or something. I’d pay good money to have a simulator that let me date Hatsune Miku or Kagamine Rin (or… well… both) I tells you what. Or, if you don’t want to go down that path, take the “idol management simulator” of Idolm@ster, and just copy that wholesale. That’ll make the fans happy, too.

What we, the fans, most certainly don’t want is a game so banal that all we’re doing is tapping a screen with a little chibi icon of Miku displayed on it. I’m telling you now, Crypton, there are limits, and this one is pushing them. I was actually looking forward to this thing and even pre-ordered it. I didn’t know much about it, but it was Miku and Miku’s never done me wrong. Until now. Sadly now I have been let down and this… this hurts, maaan.

The critic was purchased a copy of this game for the purposes of review.