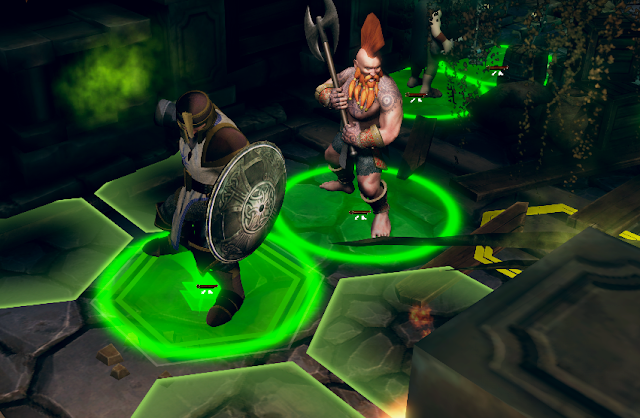 I’m a firm believer that video games should only be as long as they need to be to convey their key themes and experience to the player. If a game’s narrative is only worth an hour’s play, then make it an hour-long game. That’s preferable to something so bloated that it ends up being watered down to the point that, were it a drink you bought at the bar, you’d sock the bartender for daring to be so obvious in ripping you off. Demon’s Rise proudly proclaims that it’s got “50+ hours worth of gameplay” across “85 levels”, but this drink is so watery that it tastes like it came straight from the tap.

Demon’s Rise is a turn-based tactics RPG in which you form a party of six heroes and then play through a series of small levels in a way that’s reminiscent of board games like Hero Quest or Warhammer Quest. On the surface, it’s actually quite appealing. There are thirty different character classes to choose between, meaning there’s some truly impressive strategic variation in party choice – do you go for big damaging, but slow brutes that may be vulnerable to magic, or perhaps you’re in the mood for a ranged-heavy party. Do you want healers or big, explosive magic users that will hopefully clear out the dungeon before you need to heal at all? The balance between these units all seems pretty impressive, too, and there doesn’t seem to be a right or wrong answer, so experimenting around is fun.

The moment-to-moment tactical action is reasonably detailed, too. The game has an XCOM-like cover system whereby you can hunker down behind debris in dungeons to become harder to hit. The game’s so overwhelmingly focused on tight, enclosed combat that this mechanic isn’t as necessary to success as it is in XCOM, but it still encourages you to look around at the environment to try and spot advantages. There’s also a morale system that affects both sides, and combatants can be terrified or, alternatively, go berserk if the battle starts going against them and they see allies fall. With a couple of different skills per fighter, too, there’s plenty of tactical variety that you just wouldn’t expect to see in such a humble, indie project. That it all works well and is, again, nicely balanced is truly impressive. Much bigger developers struggle to achieve this much through the gameplay. 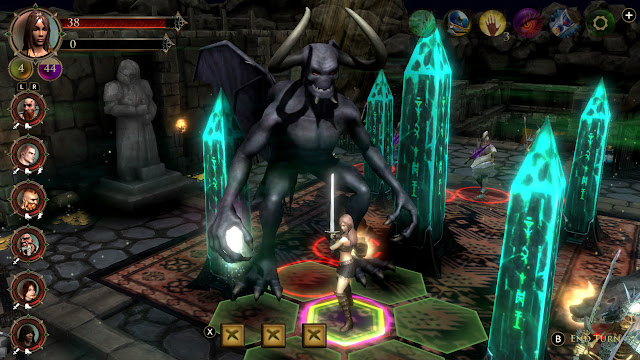 The presentational elements aren’t anywhere near as impressive, but they’re serviceable, Text is a little hard to read on Switch (particularly in handheld mode), and character models are plain, but there is such a significant variety between them that it’s never dull, at least. Dungeon environments are… well, dungeons. They carry the board game aesthetic just fine.

Where Demon’s Rise has big problems is that there’s just no reason to play for 50 hours. The first red flag is that outside of combat, there’s nothing but a menu to wade through from which you select the dungeon level that you want to play, or alternatively, you visit a shop (just a menu there too), or drop into your party’s “camp” (just an inventory screen). There’s no real effort at world-building unless you choose to pull up a map that’s buried away (and not even a menu option), where each of the various fantasy races and their nations are described with a single paragraph of text each. It seems like the developers do have larger ambitions for world-building on that basis – why go to the effort in creating the map and giving it that skeleton otherwise? – but as it is, what is in this game is incredibly shallow and lacking in any kind of engagement.

The various levels are all just as empty. You’ll get a couple of paragraphs to intro each “chapter” (a series of linked levels), and then each level will have a brief introduction. That’s it. I’d be the last to suggest that there should be more for the sake of it, and I firmly believe that one of the better narrative experiences in recent years was Dark Souls – a game that is very sparse on the explicit storytelling. But it’s not like the copy in Demon’s Rise makes you want to think about the world you’re in as Dark Souls’ narrative does, either. Instead, it does feel like it was throw in there as a purely functional effort to spin some pulp fantasy context around an existing combat system. When I play fantasy games I want vivid characters, a sense of lore, and some kind of effort to weave a compelling story. Demon’s Rise is almost the polar opposite and, while it does play perfectly well, I had trouble caring well before I hit that promised 50-hour mark. 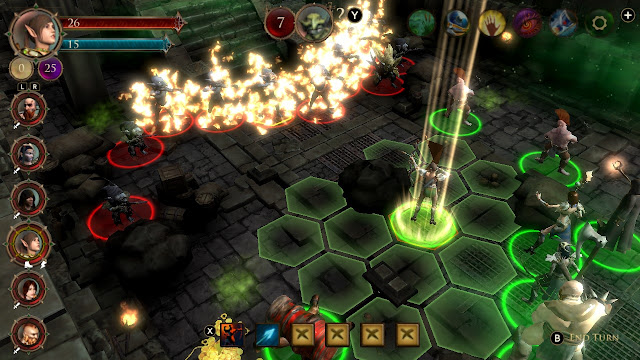 Demon’s Rise becomes a massive slog and grind then. It doesn’t help that experience levels come slowly to your characters, or that there’s very little to link one level to the next – there is no sense of risk from failing at one level (just retry after grinding up some experience and better equipment on easier levels), and therefore progress, however slow it is, is inevitable. That goes for most games, of course, but then most games have secondary (or even primary) reasons to continue playing on through – things like their narratives. The developers of Demon’s Rise are asking that you find the tactical gameplay compelling in and of itself to the point that you don’t need anything else and… it’s a rare game indeed that can pulls that off to the extent that this one is asking.

There’s plenty of merit to Demon’s Rise as the developers have delivered a game that is nicely balanced and blends a rich tapestry of gameplay elements together in a surprisingly nuanced manner. Purely on the basis of how this game is presented you just would not expect that going in. The total lack of effort in the writing kills it, though. How am I meant to enjoy a fantasy game if there is nothing to draw me into the fantasy?

Idol Manager has a publisher!