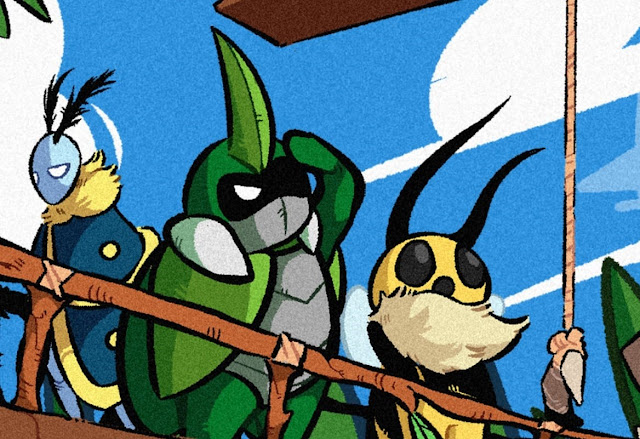 Generally, when a game from a major publisher like Nintendo proves to be popular, there are efforts by the indies to participate in that success by crafting homages to the original success story. Often these end up as shallow pastiches, but occasionally the indie will strike gold. Surprisingly, the Paper Mario formula, which has been going strong since the Nintendo 64, is an exception to the rule and has almost completely been overlooked by indie developers. That is, until now. Bug Fables does nothing to hide its source of inspiration, and the good news is that it does largely succeed in elevating itself above that of a hollow clone.

Related reading: Our review of the most recent Paper Mario RPG – Color Splash on the Wii U.

Rather than control Mario and other the denizens of the Mushroom Kingdom universe, in Bug Fables, you command colourful and energetic bees, ants, and bugs. It’s an appealing set-up and it has plenty of potential. After all, small bugs have a very different view on the world than humans do, and that different perspective could have been used to all kinds of creative ends, given that even the most mundane things to us adult humans surely seem big and terrifying to the little bugs. Unfortunately, much of this potential is squandered because the world design, puzzles, and traps all look and behave in exactly the same way as they do in a Mario title. You navigate around by flipping switches, freezing blocks of water, and jumping across platforms in exactly the same way that you would expect Mario & Co do in their own games, and so you never get to enjoy the sensation that you’re playing as a bunch of tiny bugs.

Of course the puzzle designs aren’t quite as tight or refined as we see in the Mario RPGs either. It’s close, don’t get me wrong, but little things, like aiming the bee’s boomerang to hit a switch in the distance or surprise attack an enemy, just isn’t quite as easy as it would be if it was coming from Nintendo. Using the ant character to create an ice block from dripping water takes an extra go or two because it’s difficult to instantly judge where the ant needs to be standing. Every once in a while your party will fall down a gap because movement is ever-so-slightly clumsy. None of these issues hurt the game in itself. It’s just a constant reminder that while tonally and structurally Bug Fables wears its inspiration on its sleeve, Nintendo are the masters of quality-of-life refinement and it’s hard for indies to catch that. 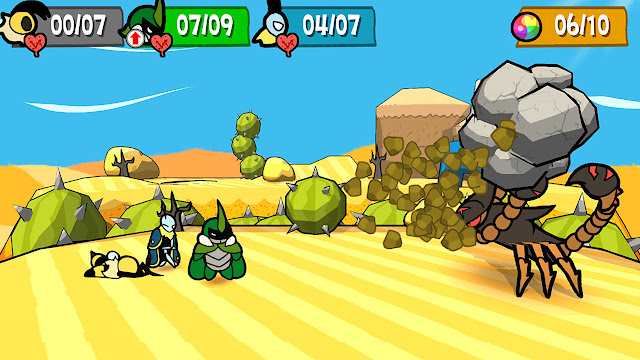 There are some other minor issues that further dampen the long-term enthusiasm for the game. The quest structure is terrible and side-quests are so filled with lengthy fetch quests that I found myself dreading each one I took on. As for the personality of the game, while the main characters are all endearing and the world is bright and colourful, the game’s pacing falls off the cliff every time you visit a non-combat area and start talking to the minor NPC characters. Very few of them have anything of worth to say, and they lack the personality and sense of humour of the main characters.

The main characters, however, are all written brilliantly, and the developer has demonstrated that it is a good student of the formula set by Nintendo. One of the most appealing things about the Mario RPGs is their desert-dry sense of humour. Most of the most amusing moments in those games are delivered with such deadpan tone that you barely register that you’re reading a joke until you’re giggling. It’s a tough form of humour to aim for in video games, particularly when it’s coming from a developer that’s working in another language and needs to have the wordplay carefully translated across. The Mario RPGs are some of the finest examples of localisation for that reason, and Bug Fables has captured that same spirit perfectly. You expect it to be a bright game from the opening seconds – the aesthetics are abundantly clear on that. You don’t expect to find it quite as funny as you’re almost certainly going to.

The combat system is another highlight. It uses the same active turn-based approach as the Mario RPGs, where you’ll select an attack or special ability, and then have to play a little minigame involving pressing a button at the right time, or playing a super-quick QTE, in order to do a maximum amount of damage on your turn. Then, the enemies strike back, and you need to time another button press in order to “block” the attack and take minimal damage. There’s plenty of variety in enemies (for example, armoured enemies being tough to damage without “flipping over” first, or flying enemies being impossible to hit without being brought to the ground through a ranged attach first), and each of the characters in your party has a drastically different skillset, so each battle tends to be a delight to play through, and the developer has made sure that levelling and the frequency of those battles are paced perfectly so that the game never gets a chance to become a grind. 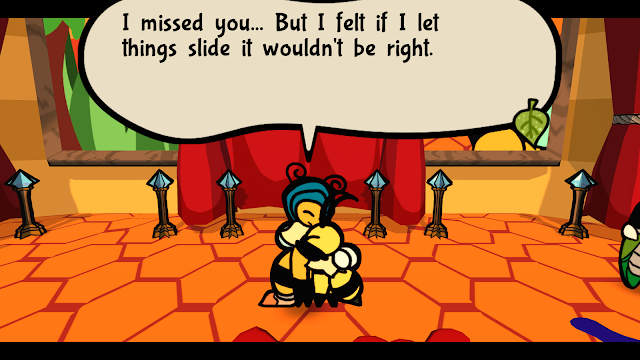 Levelling is exceedingly simple – as it is with the Mario RPGs as well. With each level you have the option of boosting the health of each of the characters in the team, the TP pool (which all characters draw on for special abilities), or the number of “medal points” you have available to equip “medals” which boost character abilities. All characters in the party level up together from a shared experience pool, making for a streamlined experience system, but one that still manages to provide the sense that you’re making progress and your characters are becoming more powerful.

One of the issues that people have with some of the more recent Mario RPG titles is that they’ve become gimmicky and rather shallow as a consequence. Bug Fables is nowhere near as refined as Nintendo’s efforts, but they also represent a back-to-basics approach to the mechanics and structure of these games. For many people that will be appealing, and Bug Fables is indeed an appealing effort by a small team. It would be great to see the team come back with something a little more refined with a second outing.

The publisher provided a copy of this game for the purposes of review.

Summer Loop: A My Time With Dee Dee Game is now live!