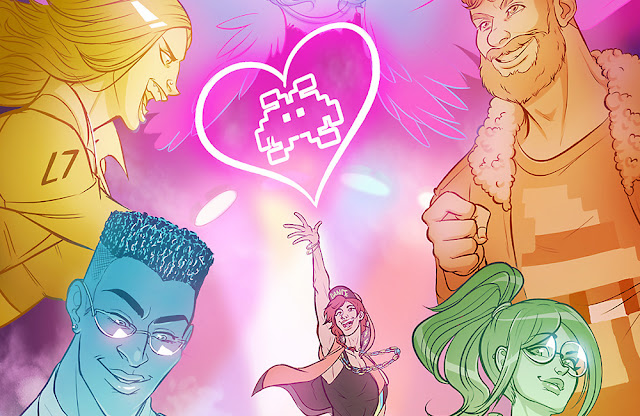 With romance games, there’s often an attempt to try and gamify the whole process of falling in love. Getting the good ending with your chosen lover should be at least a little bit of a challenge, says common wisdom, so getting there involves just the right selection of dialogue choices, often made with deliberately incomplete information, and a bit of trial-and-error and save, and an abundance of save files.

Arcade Spirits rejects that idea almost entirely. It deliberately makes the impact of every choice clear, and even lets you ignore relationship values entirely if, at key moments in the game, your heart wants something that doesn’t line up with the numbers. Arcade Spirits is less about making a game of trying to win someone’s affection, and more about giving you explore that affection, and how it shapes the kind of person you want to be (or role-play) within the game.

That isn’t to say either approach is right or wrong—lord knows I love the classic approach, and all the hurdles they make you jump through to finally earn that kiss—but there’s something refreshing about being able to just enjoy the story as it unfolds, and not have to worry about making the “right” choices along the way. 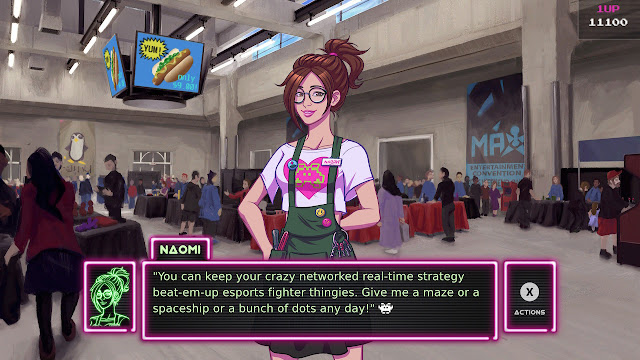 In fact, Arcade Spirits even gives you the option of skipping the romantic side of the game entirely, and limiting your interactions with those around you to friendship and camaraderie. It also lets you customise your look to some extent—not a full-blown character creator, but a few different options for body type and hairstyle—and choose what pronouns you want to use. More than any other visual novel I’ve played, Arcade Spirits really puts a focus on letting you be whatever version of yourself you want to be.

That’s appropriate, because Arcade Spirits is very much a story about figuring out who you are, finding your place in the world, and chasing your dreams. Set in the year 20XX, it begins with you in a funk of depression, having recently lost another job and very much living up to your “family curse” of nothing ever going right. Your flatmate and best friend encourages you to try a fancy new AI-driven life assistant app called Iris, which promises to be able to help you find your dream job and (if you want it to, your dream romantic partner) by constantly analysing your speech patterns and behaviour to build a comprehensive personality profile. Sure, that sounds creepy and invasive, but with nothing in life going your way, you decide to let Iris take the reins.

(As a quick aside, this app is also how Arcade Spirits contextualises and displays those more gamified elements typical of romance games, like relationship scores—not just to you as the player, but to your character in the game’s world. Iris clearly tracks your progress with each of the potential love interests, as well as the personality profile she’s building of you, and makes that readily available to your in-game self, while also making clear that she’s using these numerical values because they’re the only way she can see the world. They aren’t fate, and you’re not bound by them.) 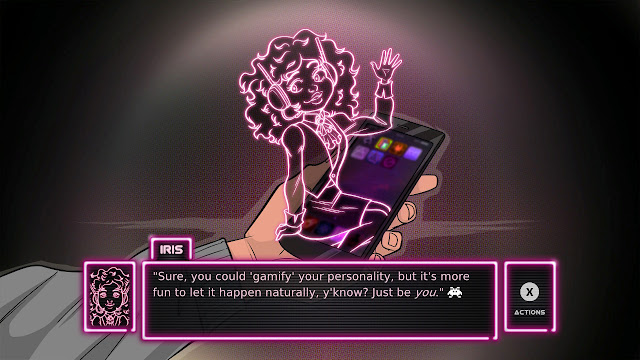 Before long, Iris finds what has a 99.97 per cent chance of being your dream job … as a floor attendant in a rundown old arcade tucked away in a quiet little strip mall. In Arcade Spirits’ vision of the future, arcades are big business, but they’re a business dominated by the glitz and glamour of esports and modern machines that are practically gambling. A place like Francince’s Arcade Funplex, with its assortment of retro games, quaint atmosphere, and just a single setup for Fist of Discomfort—a hybrid MOBA/brawler/fighting game, and the most popular thing on the esports circuit—doesn’t exactly make bank.

And yet, it’s a place where staff and regular customers can chase their own dreams, whether that’s being able to spend their days tinkering with classic arcade cabinets, parading around in cosplay, or trying to set a world record on Mr. Moopy’s Magic Maze. As the Funplex’s newest hire, you soon find yourself part of this eccentric family, and through misadventure after misadventure in arcade management, finding your own dream to chase.

In this, Arcade Spirits amounts to a heartfelt exploration of love, friendship, and arcade culture that’s as poignant as it is humorous. It’s full of all the sort of throwback references you’d expect from such a setting, but rather than simply being a never-ending string of “hey, remember the ’80s?”, this provides context for thoughtful introspection on everything from being an introvert in a world where being social and outgoing is the assumed default, to sexism in the world of esports, to the difficulty that can arise from trying to juggle idealism and pragmatism. Whoever you choose to spend your time with, whether in a romantic or platonic fashion, you’ll get to see a group of complex, complicated people that belie their initial caricature-esque impressions. 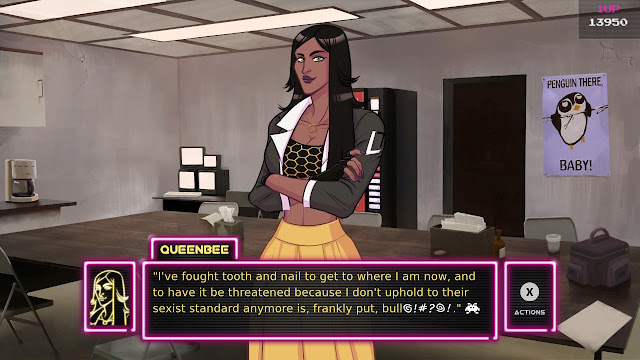 There’s a decent helping of mystery and drama, too. The CEO of the ultra-corporate arcade chain Deco’s Palace has no qualms about trying to crush little places like the Funplex when they starting getting too big for his liking, and there’s more to Iris than meets the eye (pun absolutely intended). But for all the excitement that comes with these twists and turns, they are, first and foremost, a way of building up to the heart that sits at Arcade Spirits’ core.

There are a couple of little issues that hold it back though, just a little bit. One staple of the visual novel genre is CGs—that is, special pieces of full-screen artwork that depict key moments in the game, with a level of detail and emotion far beyond what can be conveyed with the character portraits found in regular scenes. Arcade Spirits doesn’t really have many of these, aside from a cute date scene with your chosen romantic partner, and even that is somewhat limited by the need to accommodate the player’s customisations. The artwork for the partners in these scenes is gorgeous, but your own character looks a little out of place, like someone who’s been photoshopped into a picture they weren’t present for. I guess that’s a necessary compromise for having those player customisation options in the first place, but it still feels like there’s something missing.

I also ran into a few minor bugs (that’ll hopefully be resolved at some stage). At the begin of the game, you’re given the choice of whether to display markers next to dialogue options to show which of the game’s personality traits they align with; despite choosing to keep them hidden, the game displayed them for me anyway. There’s also an odd bug with save files, in that they sometimes erroneously show, on the save/load screen, as being from the beginning of chapter one, regardless of where you actually where when you saved. Once you load the save it’ll load up in the right place, but can make it hard to keep track of things if you’re using multiple saves, and it gave me a moment of terror the first time I encountered it, thinking I’d lost all my progress. 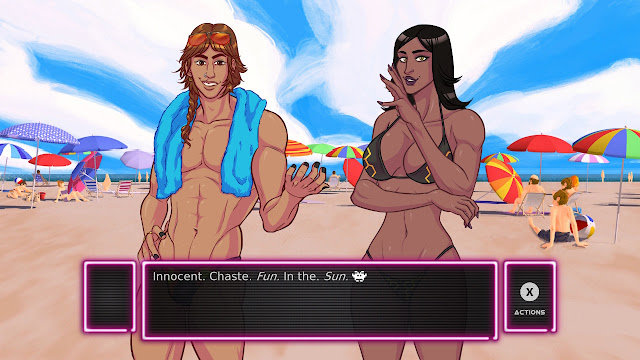 I wouldn’t let those issues discourage anyone from playing Arcade Spirits, though—they’re more just things to be aware of going in. This is a warm, funny, moving visual novel, with a delightful cast of characters to get to know and potentially fall in love with, dressed up in a loving celebration of arcade history.