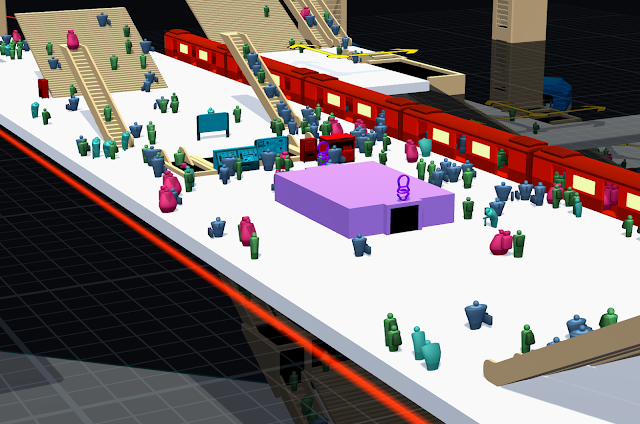 The recipe for a successful management sim is taking a scenario which everyone is familiar with, and which everyone has at one point thought “I bet I could’ve done better than the clown who was hired to do this.” STATIONflow is exactly this for the subtle art of train station layout design, and players are thrust straight into the shoes of the clowns who manage these heavily-crowded spaces. If you’ve ever felt like an idiot trying to find an exit, a bathroom or a map at a train station, now you get to yell at virtual idiots who do the same thing despite all the signs you’ve placed. STATIONflow is an unexpectedly harrowing experience. It’s a game which confronts the player with their hubris for thinking that building planning could be easy. But once the player learns the patterns to look out for and the best practices which achieve consistent results, STATIONflow is also a hugely rewarding management sim which fosters a greater appreciation for foolproof interior design.

It’s interesting to consider the scope problem which STATIONflow willingly endures for its premise: while most rail sims have players designing the railway map, creating routes and managing train volume, STATIONflow takes this aspect completely out of the player’s control. Never in this game does the player get to decide which direction the trains come from, or how often they arrive. These factors are instead a constant for the player to build their station around. Players need to take into account that sometimes train lines criss-cross in unintuitive ways; that they encroach on each other’s space without any consideration for your planning. Because of this, play often feels like making the best out of a flawed situation, rather than striving for perfection.

That being said, the player does get a fair degree of creative tools to play with. Although the train lines are off limits, players can create all sorts of rooms, pathways, stairways, and lifts, and the grid-map allows for all sorts of creative slanted paths and possibilities. There’s a surprising degree of freedom that players have access to, although taking creative liberties is not particularly rewarded. The game’s simulated commuters have simple patterns – they follow signs when they see them and when they don’t, it’s a 50/50 where they decide to go. 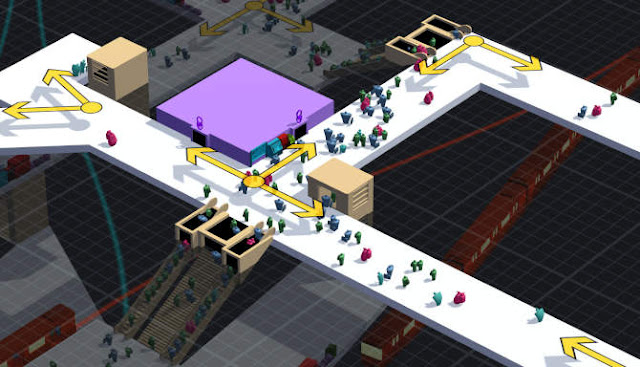 The main challenge of STATIONflow is to see how scalable an initial design can be, once variables keep increasing with demand. As with all growing cities, the game creates pressure on the infrastructure you’ve built by piling on customer demands, additional entrances/exits, additional train lines, and good old-fashioned people volume. Solutions which might have worked for a station servicing 100 people per day might fall apart once that station starts seeing 1000. Rather than look to the future and predict what the maximum traffic might look like, (which the game mercifully allows players to do, although it disables achievements), the standard gameplay is all about adaptation.

In the beginning, you’ll only have a small amount of capital, enough to create the bare necessities to get your commuters from street level to the train platform. As your funds increase, you’ll need to spend them in efficient ways to meet the ballooning demand. This affords the game an effective natural progression system, which functions robustly without game-y targets that other simulation games tend to use.

It’s also a treat for the statisticians among us. STATIONflow’s End of Day report is far more detailed than most other games of its kind – it shows the basics such as revenue and customer satisfaction, but it also breaks down the key demographics in order to deliver a top-down view of the player’s successes and failures. You’ll be able to see not just whether commuters were angry, but also why they were angry. Maybe an entrance is missing a sign and people got lost. Maybe the corridor got far too congested and people had to wait. Or maybe just one knobhead spent an hour trying to look for a bathroom. This feedback immediately lets the player know how they can improve, and it does a good job of simulating the challenges which might occur in a similar real-life scenario. 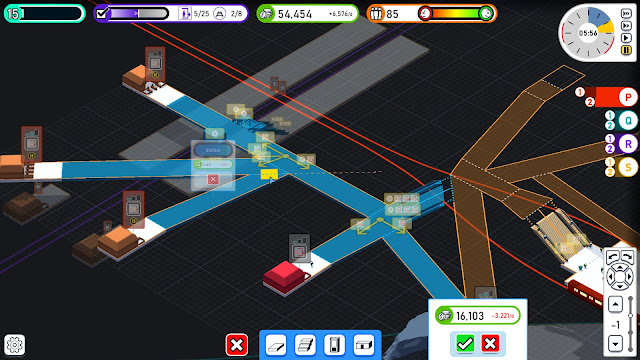 One real missed opportunity I noticed was the lack of personality or aesthetic design of any of the stations. I understand that the mechanics emphasise sensibility over style, but there’s also certainly a value to train stations which are classically beautiful or elegant in their design. I thought perhaps revenue could also be tied to advertising, and placing billboards or posters in opportune places, to add an additional layer of strategy into directing people flow. What’s already here is fully robust, but I was left wanting more in terms of player creativity.

In its aim to achieve realism, STATIONflow does sacrifice the immediate appeal of a more bombastic videogame. The simple graphics and reliance on numbers and stats tends to detract from a sense of immediate fun. While each individual map doesn’t have much in the way of achievements or challenges aside from survival, the simplicity opens up the possibility of user-made maps, and once a solid community develops, I’m sure the avid player will have no shortage of content to test their mettle. The developers seem to have picked their battles well; they’ve achieved a uniform vision, and even though it might turn away players seeking immediate gratification, its sure to pique the curiosity of those who crave realism in their simulation titles.

STATIONflow is an interesting experiment in urban space design, with an eye for the utilitarian and an ultimately sympathetic outlook on the bureaucracy. All in all, meeting the demands of thousands of commuters is difficult, and the game is effective in teaching the player why inefficiencies tend to occur. It’s a very particular kind of person who would enjoy this – they’d need to like thinking on their feet, and coming up with practical (if a little boring) solutions to complex problems, only to be rewarded by the reassurance that nothing’s gone wrong. But as with most games which target a niche audience, there’s bound to be a dedicated following eager to enjoy what DMM Games have to offer.

Get a proper look at all 51 games in Clubhouse Games: 51 Worldwide Classics