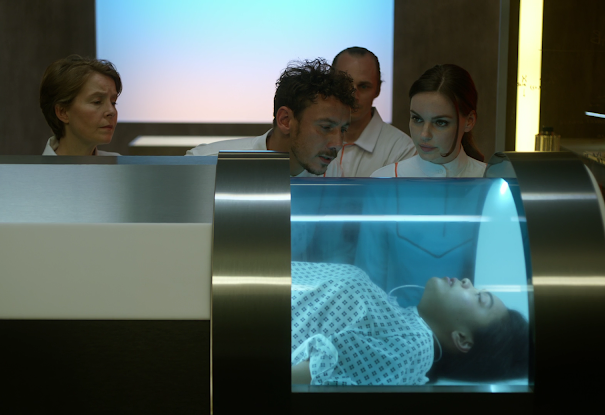 Let’s be real: the world is a rather complicated place right now. For once, it’s okay to be afraid of the outside world and what could happen to you and your loved ones when they leave the house. Every decision to go to the grocery store, to go to the pharmacy, can feel monumental when you’re already an anxious person. So it’s kind of the perfect time for The Complex to be released: take a break by making some else’s life-or-death decisions!

Jokes aside, I really appreciate The Complex as it was successfully able to remove me from the outside world for a couple of hours, a near-impossible feat. The Complex is an interactive film, so everything is live-acted and the player makes the main character’s choices. It’s quick-paced, suspenseful, and mysterious, with an intriguing plot and one heck of a cast.

The game follows Dr. Amy Tenant, a leader in Nancocell Technology. Five years ago, she experienced a traumatic incident in the totalitarian state of Kindar; the country, oddly enough, has become an ally to the company where Dr. Tenant now works, Kensington Corp. Kensington has built this massive, bespoke headquarters — The Complex itself. It is here that Dr. Tenant’s work on Nancocell Technology happens, with the goal being to be the first to get an astronaut to Mars. Easy enough, right?

Except it isn’t, as one of the company’s interns from Kindar falls incredibly ill on the tube. She is brought back to The Complex, where Dr. Tenant and several colleagues can deal with the situation safely. At least, that was the idea, but it turns out The Complex isn’t quite as locked down as Kensington led us to believe.

Before talking about the gameplay itself, it’s really important to give a nod to the amazing cast. Dr. Amy Tenant is played by Michelle Mylett, a fellow Canadian best known as Katy the hilarious Letterkenny. This role is a large departure from that one, swinging entirely from comedy to drama, but she handles it with grace. I’ve watched an excessive amount of Letterkenny (what can I say, I relate to it on a remarkably personal level) and didn’t think I could separate Mylett from Katy, but I soon forgot I was watching anyone other than Dr. Amy Tenant. I’m excited to see what she could do next.

Dr. Tenant’s partner for this experience is Rees Wakefield, who she hasn’t seen since the aforementioned traumatic incident. Their relationship begins incredibly tense but slowly grows into total trust. Wakefield is played by Al Weaver, who most may know from his role in the TV series Grantchester, but who I still remember as Andy Galbraith in The Blind Banker episode of Sherlock. Sure, that was a decade ago, but he had a soft place in my heart even then. Wakefield comes off as incredibly cocky, often cracking jokes. My favourite line in the entire game (film?) is his: “What kind of scientist has a *bleep*ing ponytail?!” As The Complex moves ahead, his character ends up showing arguably the most growth of everyone. 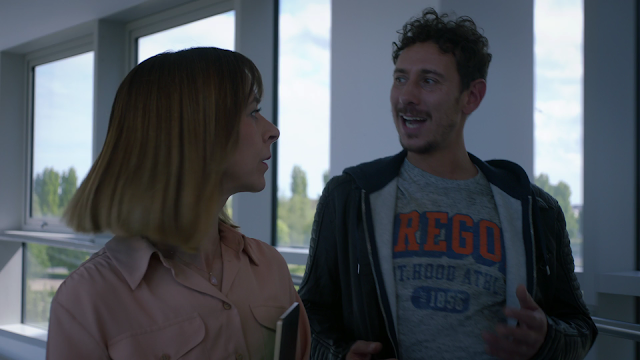 Rounding out the main cast are Kate Dickie, Kim Adis, and Rachel Petladwala. Dickie, perhaps best known as Lysa Arryn in early Game of Thrones episodes, is Nathalie Kensington; yes, that’s her name on the building. She’s in charge of everything, being rather hard-headed but sometimes takes advice from others. Kim Adis is the intern who fell ill and is returned to The Complex so scientists can speak to and work on her. The character’s motives remain a mystery for most of the game, with some shocks along the way, but depending on the route you choose to take, she becomes an integral part to saving everyone in the lab. Last but certainly not least is Rachel Petladwala, whose role is as Kensington’s assistant, soft-spoken yet convincing, perhaps somewhat secretive.

Since there is so much dialogue, subtitles are an incredibly important feature. You can turn them on and off, and chose white-on-black or black-on-white, but unfortunately there are no size or font style options. Personally, it didn’t impact my experience, but that doesn’t mean I don’t understand the importance of fully customisable subtitles.

Another option given is to pause choices; Wales Interactive describes this is being for improved audience participation for live streams, but for me it’s great because my reflexes are… well, questionable at the best of times. Often, in interactive films or FMV titles, my fingers take too long to move after my brain commands it, and I miss out on even making choices. That shouldn’t happen here, thankfully. 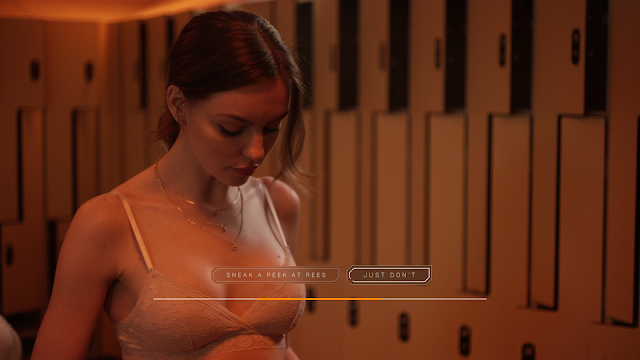 The “interactive” part of this interactive film is all about decision-making from Dr. Tenant’s position. Do you want to keep fielding questions or head to an emergency? Do you want to play nice with Wakefield, or continue to be icy due to past circumstance? And do you have the ability to make the right decisions needed to escape what turns out to be an incredibly dangerous situation? There are eight endings, and you can bet they’re not all happy.

As you make decisions for Dr. Tenant, you can check her personality traits and relationship status by clicking the touchpad. Both sections change as you make decisions. Her personality stats are honesty, bravery, curiousity, intelligence, and sensitivity. In the relationship status section, how much each character likes her is tracked, as well as who has died along the way. It’s nice to have, I suppose, because you can see which trait stats result in which endings, but in reality I doubt many people will actually track that. And the relationship status section seems equally unnecessary, as some can’t even be changed past a certain point. I completely acknowledge that this could just be me, and others may find these statistics more helpful than I.

Every single decision I made through the game felt like the wrong one. That’s how loaded they are. I mean, one of your first calls is who lives and who dies. Also, I’m a freelance games journalist and critic; I’m not exactly qualified to be making complicated scientific/medical calls. Even when the decision is whether to be honest or light-hearted, it seems like the entire world will end if I choose the wrong one. The choices actually help build the suspense of the narrative, as they get more impossible as the story moves forward. 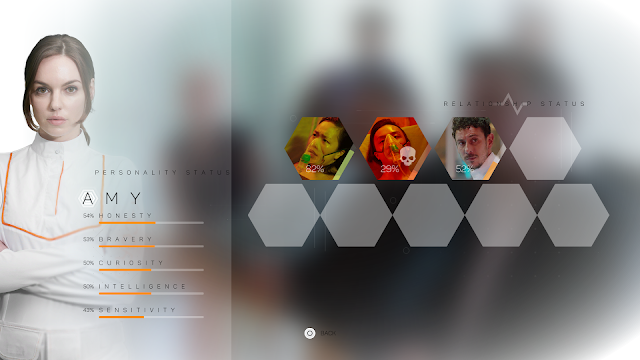 So let’s go down the list of what makes The Complex compelling: phenomenal cast, complicated characters, a deep and rather dark narrative. No, it’s not a traditional game. No, it’s not a traditional film. But when it comes to interactive films, it’s a very solid effort worth several playthroughs to discover what you may have missed the first time. The developer even makes it easy to play again, offering a skip button for subsequent plays. There are some components that seem unnecessary, and some settings that could be improved upon, but The Complex is absolutely a game I will recommend again and again.

Koei Tecmo is ending ongoing development of Dead or Alive 6