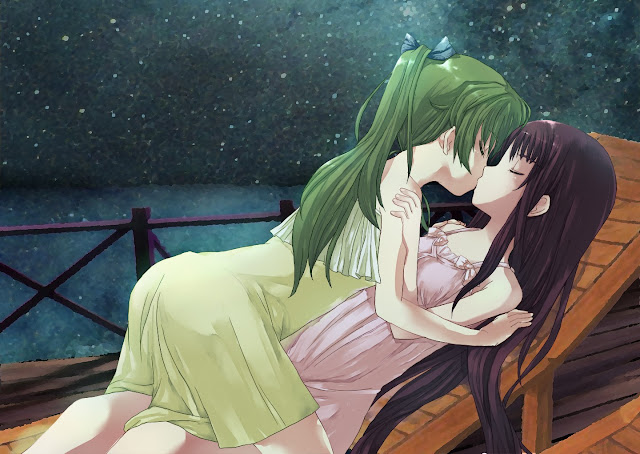 SeaBed is a rather precious thing; it might look amateurish in its aesthetics, and even by visual novel standards it lacks interactivity, but it’s also a remarkable bit of storytelling, and one that defies expectations at every turn and refuses to take the low road. It bills itself as “yuri”, but that’s doing it a disservice, since unlike just about every one of its genre peers it takes a wholesome and naturalistic approach to the sexuality of its characters. It’s also in theory a mystery narrative, but in video games that means a narrow set of criteria that SeaBed avoids in its entirety.

Related reading: For another take on SeaBed, read Matt C’s review of the game on PC.

SeaBed is a mystery in a way that’s akin to how Kirino Natsuo’s masterpiece novel, Grotesque, is a mystery. The actual mystery that’s going on is a backdrop to what the story actually wants to muse on, and that’s the human condition. SeaBed tells the story of two women who were best friends in school, before becoming lovers as adults. They travel the world and go into business together, but at some point, something tears them apart, and no one seems to remember why. One of the two women, Sachiko, begins having hallucinations that her former love, Takako, is still with her, and while it somehow isn’t having an impact on her ability to function in the world, she eventually decides to explore her past and try and work out what happened.

If you were to take that at face value, and assume that the story is about Sachiko’s delve into her past and unconscious mind, then you would be reading SeaBed wrong. It does plenty of foreshadowing throughout the story, and while it has cliffhanger moments, and moments of high drama, none of that will come as a shock to anyone with even a vague understand of narrative. This is why the comparison to Grotesque is apt – in that book, too, the actual murder and detective process are the background to the exploration of elements of the human condition. SeaBed’s real focus is on the story it tells of love, loss, and recovery, and it’s a story beautifully told. 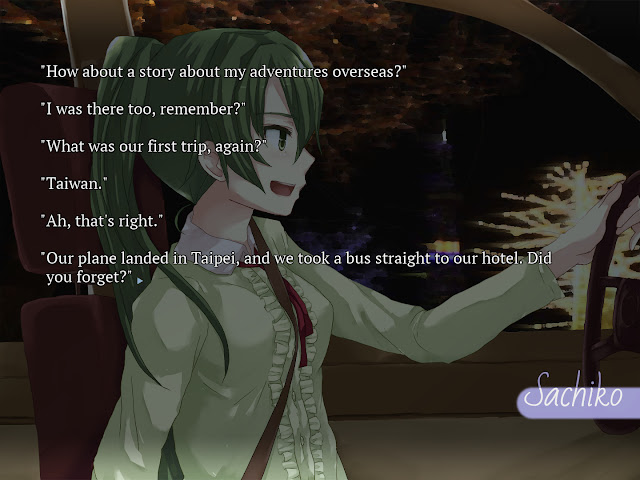 Even among other visual novels, SeaBed really does need to be seen as literature, rather than a video game. This isn’t just because of the lack of “interactivity,” but rather the structure and pacing of the game itself. SeaBed is a long visual novel and it can, at times, meander. Descriptions can be overly wordy and full of superfluous digressions, but I would argue that that’s essential to the experience, for the simple reason that it forces you to go slow and really read every word of it. People read different types of text in different ways – you skim an article on the Web, for example, and you expect brevity in video games. Most visual novels provide that by breaking text up into short sentences, forcing you to continue pressing a button in order to progress the text – and story – onward. In this way, even though a visual novel is generally limited as a work of “interactivity”‘, it is active, and that means you adjust your approach to reading it in many subtle ways.

But a book is something you sit down and carefully pour your way through. Skim a book and you’ll lose meaning, and I would suggest that all the “superfluous” stuff embedded into SeaBed is an effort to focus the player into a more “book-reading” mental state. Further emphasising the book-like structure, text is presented in prose, such as it would be in a novel. The play-like structure of most visual novels, where every line is “tagged” to a particular character is done away with. Lose your concentration, and it can be difficult to keep track of who is saying what. As a bibliophile, this approach holds massive appeal, and to have that exact same experience in “playing” SeaBed got the game off on the right foot with me immediately.

The offshoot of that is that the writing needed to be really excellent, as the game deliberately made itself entirely about the quality of the writing. Most visual novels have other elements such as big-breasted women with animated physics built in, or even RPG and decision-making elements, that can distract from a wayward moment or two in the text, but SeaBed gave the writers nowhere to hide. Thankfully SeaBed is pitched perfectly. Every character has a distinct personality, and they all bounce off one another well. The relationship between Sachiko and Takiko is the particularly important one, of course, and it’s a lovely dynamic. Sachiko is reserved and quiet (though not the caricature tsun of many visual novels), and Takiko is care-free and vivacious (though not the dumb airhead of many visual novels). They’re different people, but a believable couple, given that people very rarely end up falling in love with a personality parallel to their own. 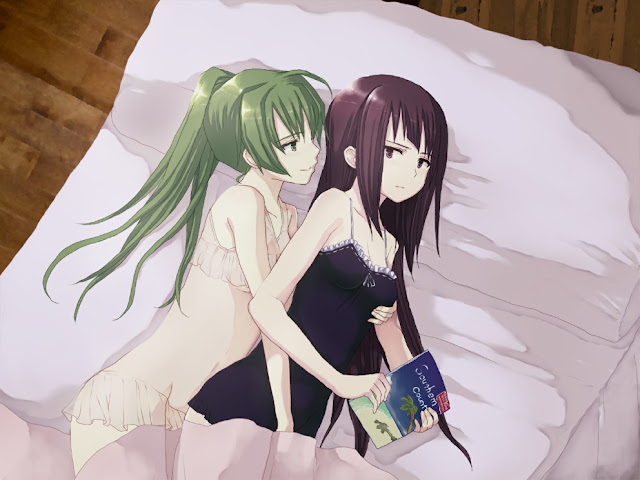 If I was to voice one frustration with SeaBed’s storytelling is that it loves dumping incredibly dense blocks of text that introduce wonderful ideas, and then stop short of fully exploring those. A game that is happy to spend fifteen minutes describing a scene in which Takako annoys her entire group of co-workers by crunching hard on candy spares just a couple of paragraphs of text here and there for a discussion about the tensions between perception and reality. That’s where the wordiness of SeaBed starts to look a little superficial – it’s not that it is wordy so much as it doesn’t balance out what it uses its words on as well as possible.

Putting the intellectual thinking aside, though (if you allow it to, SeaBed can take you down dozens of rabbit holes and you’ll end up with a long reading list of philosophers and thinkers to work through), SeaBed does know how to keep things simple and emotive when it needs to. The relationship between Sachiko and Takako is tender, and the music and visual aesthetic that runs in the background (literally) to the text is effective in setting a melancholic, but romantic tone. The artists behind SeaBed are by no means at the top of their field, but the simple efficiency of the character designs and backgrounds work well to evoke a wide range of emotions, from the nostalgic, to the breezy warmth of a long-deserved holiday, and the sheer tiredness of the work grind. As simple as the aesthetic design is, it’s both versatile and effective throughout the game’s entire run time.

And, on a completely personal note, Takako wears her gorgeous long green hair in twintails and we all know how much I love my anime girls to do that… 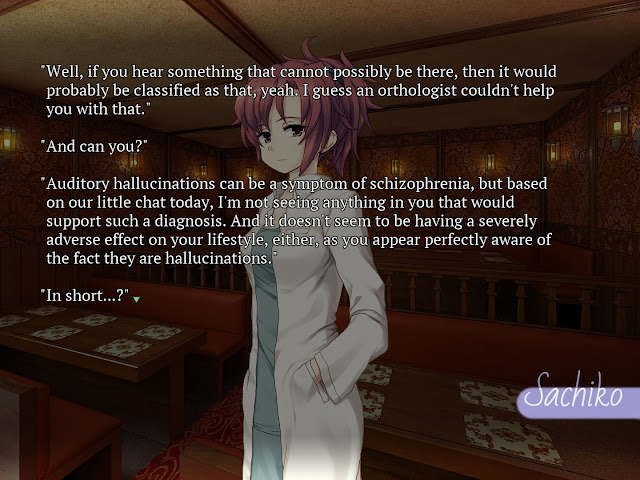 As a final note – I’m a little mystified at how the publisher, Fruitbat Factory, pitched SeaBed. The localisation is nothing short of brilliant and in a fairer world Fruitbat Factory would be working on much (much) more high profile projects because the localisation outfit is as good as any I’ve ever come across. Clearly, the team understands this game to a deeply intuitive level. And yet, you look at the promotional imagery on the Steam and Switch pages, and it’s the two girls frolicking on the beach in tiny little bikinis groping one another, or in bed massaging each other. I went into this game knowing that it had a good reputation for storytelling, but also expecting it to have some real fanservice to work through. Which, of course, I was looking forward to, in no small part because one of the girls has green twintails.

Instead, the “fanservice” here is pure narrative. In context it doesn’t even come across as particularly sexy. It context it represents a deeper kind of love and adds to the characterisation powerfully. I’m assuming that the publisher chose those scenes because they are beautifully drawn and much easier to represent to players looking at screenshots than the dense underlying narrative (and in fairness, I’m doing that exact thing with the screenshots in this review)… but I do wonder if some people will miss out on SeaBed simply because fanservice isn’t their thing and therefore they make the assumption that this, based on those screenshots, would not be either.

That would be a pity. As many people should play SeaBed as possible, as this is truly lovely bit of literature in the guise of a visual novel. The Switch has no shortage of this genre at this point, but SeaBed might just be the most meaningful of them all.