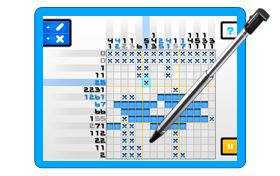 Picross is a little like Sudoku – you can make it prettier and offer a fresh range of puzzles with each new release, but at the end of the day you’re still selling your customers the same old game. As it is with Picross E – a fine package with gorgeous production values that does absolutely nothing to advance the nonogram.

Never played a nonogram before? It’s ok, aside from Picross it’s a pretty obscure form of puzzle game. Basically it’s like crosswords, but with numbers, and instead of filling a grid in with words, you’re using clues to colour in a grid to show a picture. So as an example the first grids you’ll experience are 5×5 – that’s five little squares up, and five across. Aside each row and column is a number. That number gives you a clue as to how many squares in that row or column need to be coloured in. “5”, for example, means five squares in a row are to be coloured (in a 5×5 grid, that’s all the squares in the row or column), while “2,2” means two squares in a row, a gap of at least one square and then two more squares in a row.

Those 5×5 grids are ridiculously easy, but once the game starts throwing in 10×10 and 15×15 grids you’ll need to use some logical puzzle skills to work through them. The basic goal is to finish each grid in 60 minutes or less, and the more difficult puzzles will take all 60 minutes. 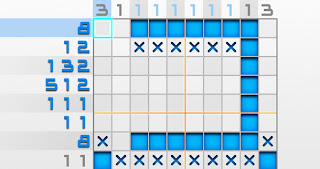 It’s a rewarding process though, to finally figure out that shape that had previously been frustrating enough to risk the 3DS taking an express trip to the wall. Thanks to the sheer number of puzzles in Picross E there’s also a heck of a lot of play value in the title.

And as I alluded to at the start this is a seriously good looking game. For a second I thought it was developed by Mitchell Corp, the talented team behind underrated DS classics Polarium and Wakugumi Monochrome Puzzle. The art style is minimalist and clinical, featuring clean lines, futuristic fonts and a classy menu system. The puzzles, once revealed, are therefore a nice reward for hard work. Interface design tends to be an unsung hero in game design, but in this case it deserves to be put up on a pedestal; more games should be designed with this kind of production value.

The soundtrack is suitably classy, too, so no complaints there. In fact, it’s impossible to really criticise Picross E. It does absolutely everything it promises for a low asking price. 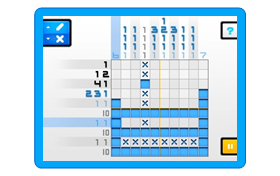 But here’s the real problem – it’s not as meaty as the DS Picross game, and it’s not as innovative as Picross 3D, also on the DS (and in both cases therefore playable on the 3DS). Picross fans have probably also picked up Mario Picross on the 3DS Virtual Console which, though obviously not as pretty, is a whole lot of gameplay in itself.

So here’s the real question: are you looking for even more Picross? If so, then go ahead, but it’s a bit of overkill from where I’m sitting. At the very least there should have been a puzzle create/ share mode. When there’s puzzlers like Pushmo already on the eShop for download this game is better for the Picross newbies or the most hardcore of hardcore nonogram fans.

Game bundles of the moment 12-9-2012: Destroying the Swedish fort