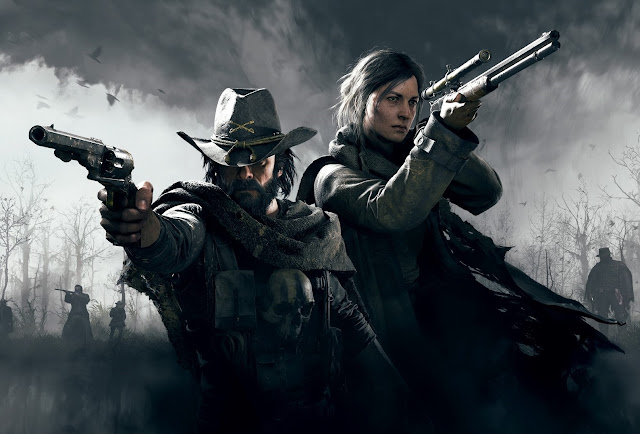 Hunt: Showdown so desperately needed to be a different type of game. As a multiplayer shooter, it works, and indeed works really well. But it needed to be a single player, narrative-driven experience (and, you have to suspect, was at some stage designed that way) because as it is its themes, and its gameplay, do not mesh properly at all.

Hunt is horror-themed, and what’s immediately appealing about it is that it’s not a generic kind of horror, either – it’s a B-grade deep south Gothic thing, and it nails the same grotesque aesthetics and sense of fading rural tradition that so effectively powered stuff like Texas Chainsaw Massacre in film. As a fan of horror, slashers, and the aesthetics of the Louisiana bayou, I was immediately attracted to what Hunt was promising.

Sadly, it does next to nothing with any of its concepts. There’s very little storytelling in Hunt, for a start. You play as a hunter, who is tasked with tracking down and eliminating a brutally powerful monster. To do that you need to move from one decrepit location to another, sneaking past (or killing) lesser enemies, such as flesh monsters, hellhounds, zombies and the like. In the early stages, you’re tracking down “clues”. After finding a number of these clues you know where the mark monster resides, and then it’s a matter of following the map to that monster. Then you kill it, collect a special reward token from it, and then try to escape the area. 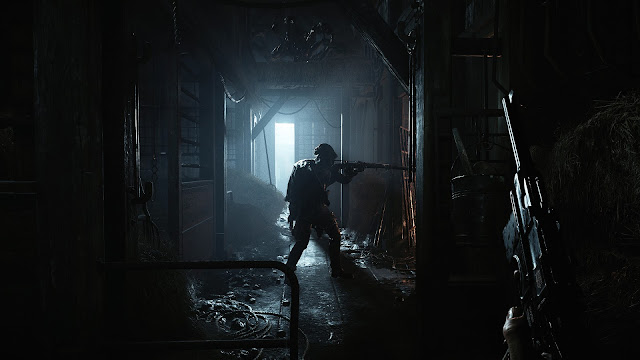 The catch is that you’re not the only hunter on the job. In teams of 1-3, you and a bunch of rival gangs are all competing to get to the mark and make off with the trophy before the others, and naturally, when you run into rival groups, firefights tend to start. So there is a bit of emergent narrative each time you play a game of Hunt, as you follow the journey through the bayou and run-down buildings, and fight off your rivals. That character death is permanent also helps create a quality of danger in the action, though sadly experience levels will pass on to your next character, so the consequences to death are no where near significant enough to become dramatic. There’s also no overarching story linking your forays into the wilderness together. Instead, all there is are progression systems, and an endless effort to push you into one match after another.

This kills Hunt. To address the most obvious first – the marks that you need to track down. The first time you encounter the skittering giant spider, it’s terrifying. Ridiculously fast and incredibly deadly, it’s a whirling dervish of poison and destruction. The Assassin, with its ability to dash away as a cloud of darkness, is a different kind of threat, as is every other one of the monsters, and the first time you meet any of them, there’s a real intensity in trying to understand how they move, and how to counter their strengths while targeting their weaknesses. It’s the perfect motif for action horror – the sense that what you’re up against is overwhelmingly powerful.

But that’s only the first time. By the fifth or sixth time, you understand the monster and, before you even encounter them you’ve got your strategy all planned out (the game tells you which monsters you’ll be hunting that game). It stops being intense, intimidating, or even remotely terrifying by then. By then the monsters are mundane – a series of mechanics to overcome rather than a memorable creature of madness. 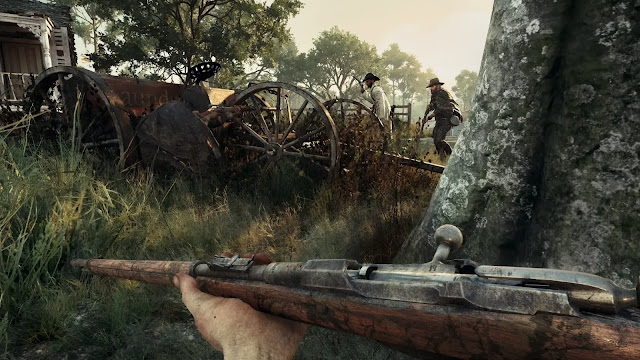 The same goes for the level design, with its score or so key locations scattered across the map. These locations are where the action is designed to occur (be those barns, or train stations, or jetties), because that’s where the “clues” you need to track down are located, or alternatively it’s the lair of the mark for that round. Between them are generally unexciting roads that link locations together, and by the time you’ve played a dozen rounds, you’ll start to find locations and layouts all-too-familiar. Horror, a genre that so heavily relies on its ability to shock and surprise, does not fit well with multiplayer shooters, in which levels are designed to be played so often they become rote. What happens to Hunt, then, is that it loses any sense of atmosphere or horror. Yes, the monsters are ugly, and yet, everything looks like it’s stripped right from the set of the latest B-slasher, but by the time you’re a couple of rounds in, none of it has any impact.

For all of that, it plays really, really well, and I’ve been having a great time with it, even as it has disappointed the horror fan in me. Matchmaking has been stable and fair, and once in a match, I’ve never felt like the game has bugged out on me to my detriment. More importantly, however, is that progression feels good. There’s a steady stream of new unlocks, and the currency systems in place seem fairly well tuned to give everyone a chance without being overly grindy. Having not played too many games of this type for too long, I don’t know how the community would respond to Hunt in comparison to its peers, but it never annoyed me.

In battle, guns and weapons feel great, and you do feel like your character is sufficiently vulnerable that run-and-gun play doesn’t result in great survival odds. It’s relatively easy to knock bars of health off, while enemies tend to take a fair bit of punishment, so good players know how to sneak around and avoid the larger hordes of beasties… not least because you’ll want to preserve as many resources as possible for that eventual showdown with the mark. I think that the more strategic approach to action is what really hooked me in. Using the direction that birds fly off in when a rival hunter disrupts them to pinpoint the enemy’s location, for example. Or taking the risk of allowing another team of hunters to kill a mark so you can charge in, mop them up, and claim the reward for yourself are some of those small moments that help to give Hunt a more cerebral edge, and it’s all the more appealing for it. However, even here the tension between the atmosphere and the gameplay mechanics is present. Working strategically in a team in Hunt really does rely on having voice communications with your team… and nothing ruins the finely-tuned atmosphere of a horror game like a cheap microphone delivering some dude’s bad rap music as he plays. 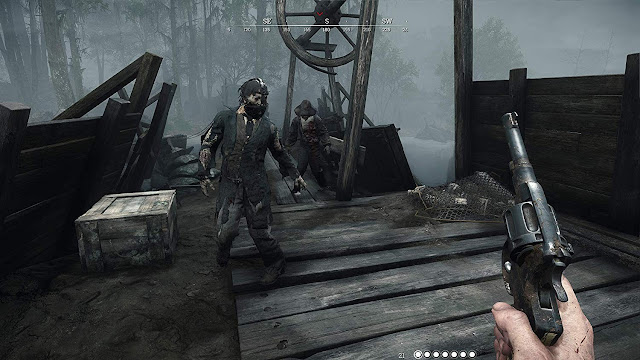 Hunt could have been so much more. As a hypothetical single player game, in which you carefully research a mark as you make your way through a deep south Gothic nightmare towards the final, hellish, confrontation, Hunt could have been something truly special. But commercial reality won’t allow for that. Multiplayer shooters and content-driven live services are where the money’s at, and in chasing the money Crytek has produced something that’s a whole lot of fun to play, but ultimately shallow, vapid, and a complete waste of all the effort that went into the theme and design of the thing.

Hunt: Showdown is great fun… but should have been single player