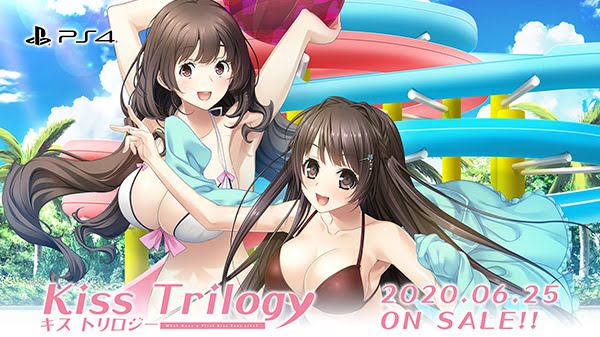 Hotch Kiss follows Shigeru, a smooth-talking second-year student. There’s a secret shop that all the students seem to know of, selling anything from exam cheat sheets to photos of girls or love potions. Shigeru ends up working there one day after the school idol turned shopkeep gave him terrible service so he started helping himself, making himself mistaken for an employee. One day, the idol, Yukino, gives him the stapler of eternal bonds.

In Kiss Bell, it’s nearing the Christmas season, and the volunteer Christmas club has been started at Academy Ekoda. Ichio joins the club, trying to make up for past misgivings. He gets to know several of the other students well, but how will their relationships end up? And Kiss Ato is about Makoto, who attends a special school for the arts. Towards the end of his second year, he sits next to Tsukuyo, known for her art skills… and falls in love.

Developed by Lightbulb Crew and published by Focus Home Interactive, Othercide will be coming to PC, PlayStation 4, and Xbox One this (Northern) summer. Before anyone complains that the Nintendo Switch isn’t included on that list, let’s move on to the reveal trailer:

The Daughters are echoes of the greatest warrior to ever live, and they are all that stand between Suffering and death. It seems as though they are humanity’s last hope. You’ll lead an army of Daughters, with combat shaping their abilities and personality. Sometimes the decisions get impossible, such as sacrificing one to save another. The good news is, the survivors only get stronger.

You’ll be battling the sources of Suffering, dreadful creatures pulled from humanity’s crimes against itself. The combat gameplay involved a Dynamic Timeline system, allowing you to plan ahead of set up chains of attack. The developer promises a deep and complex narrative stretching back eons.

Unlike Sony, SE isn’t pulling out of PAX East

I’m still baffled that Sony pulled out of the conference altogether, but it’s nice knowing Square Enix will still show up (though in limited capacity due to international travellers). The games features will be Final Fantasy VII Remake, Final Fantasy XIV Online, and Outriders. Outriders, a co-op RPG, has the smallest presence, not being shown in the Square Enix booths but instead being the focus on a panel. The other two titles are playable with other activities as well. Lots of merchandise for various Square Enix games should be available.

The Final Fantasy VII Remake booth will be set up with a playable demo of the upcoming title. There will also be a signing sessions with voice actors Britt Baron (Tifa), John Eric Bentley (Barret), Briana White (Aerith), Erica Lindbeck (Jessie) and Gideon Emery (Biggs). You can get your photo taken with Cloud’s iconic Hardy Daytona motorcycle, or take home free posters featuring artwork of the cast.

Visitors to the Final Fantasy XIV Online booth can play versus the fearsome Ruby Weapon, and if successful they’ll win an “I Beat Ruby Weapon” t-shirt. Like the FFVII Remake booth, a photo op will be available, this time with an expansive background and a variety of in-game weapons to choose from. There’s a poster giveaway for the game, and a postcard giveaway featuring War Of Visions: Final Fantasy Brave Exvius and Final Fantasy XIV: Shadowbringers. Finally, there will be a developer livestream with Producer/Director Naoki Yoshida and Lead Character Concept Artist Yusuke Mogi (February 29 at 8 p.m. EST).

Published by Nacon and co-developed by Cyanide (Call of Cthulhu) and Leikir Studio (Wondershot), Rogue Lords is set in 17th-century New England. Mortals and diabolical entities walk side by side. The game promises to invert usual tropes, with players taking on the role of the Devil who is aiming to regain his powers following a terrible defeat. For this to happen, he brings together a team of Disciples of Evil, such as Bloody Mary and Dracula.

The game allows the player to explore a 3D map and choose how to create chaos. The battles are turn-based and take full advantage of his Disciples, each having different skills. And as the Devil, of course you have special powers and the ability to cheat to turn the situation around.

Rogue Lords will be released this (Northern) autumn on PC, Nintendo Switch, PlayStation 4, and Xbox One.