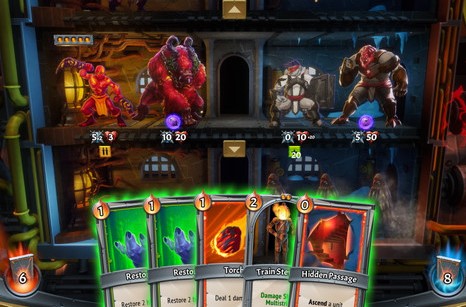 Fans of card games have been spoiled for choice in recent years, with a real explosion of games that, in one way or another, riff on the old Magic The Gathering CCG format. You’d think that the space was approaching saturation point, but it continues to appeal to developers, who continue to find unique ways to spin on the idea.

One such example is the upcoming Monster Train, which blends strategy and card game with a cartoonish hell aesthetic. We had the chance to ask a couple of questions of the CEO of the developer Shiny Shoe, Mark Cooke, about what the team is looking to achieve from this game:

Matt S: Where did the idea for Monster Train come from? Was there anything in particular that inspired the mechanics behind it?
Mark C:The idea came from a company wide game jam we did at Shiny Shoe in September 2018 to explore new game ideas. The original prototype of Monster Train was very different – it was set in a castle, gameplay played out in real-time instead of being turn-based, and you were protecting treasure instead of the last piece of hell pyre. However, two of the key components were already there: multiple floors and the importance of positioning your units well.

The team building the prototype wanted to explore novel gameplay in card game context and was trying out a number of unique ideas. Some of those panned out, like the multiple floors, and some did not, like the real-time progression of game state.


Matt S: There are a lot of digital card games out there, and it’s safe to say that it is a very mature market at this point. What do you think it is about Monster Train that will help it stand out?
Mark C: Monster Train is a deck building roguelike. Within that subgenre, we have novel core gameplay mechanics with our vertical multi-floor combat system, significantly more multiplayer features, and we have invested a lot into making the presentation elements shine.

To add some detail on the multiplayer side, in addition to leaderboard based features like daily challenges that genre fans have come to expect we also have a synchronous mode called Hell Rush with live matchmaking. Up to eight players can play in the same match to race against each other through hell to see who can make the best strategic decisions under time pressure. Finally, we are storing things like the player’s run history and decks server-side. This is subtle but it enables some interesting features. One example: players can create links to their runs and share them with other people via a monstertrain:// URL. It’s fun to show off cool deck combos.

Matt S: The expectation with many of these digital card games is that they will be free-to-play now. Do you think there is room for premium-priced digital CCG experience – and what does that pricing model offer a developer over free-to-play?
Mark C: Monster Train is not a CCG. You can’t buy booster packs. We aren’t structurally similar to a Magic or Hearthstone in terms of business model. All cards are in the game from the outset once you buy it, though in single-player you’ll have to play for a while to unlock access to all of them. Multiplayer modes have all cards unlocked all the time because the game is deterministic and it’s important we are fair to all players in a match.

In terms of the experience for the development team the difference is the usual – unlike building a F2P game, we don’t have to be constantly thinking about the overlap of the business model and the game design. Instead we focus only on the game design, aiming to make this the best game possible for players who have purchased it.

Matt S: Where did the designs of the monsters come from? It looks like this will be a bright and colourful game – what inspired you to take that direction?
Mark C: Our process for creating monsters and enemies worked like this. First, we would add cards and units to the game based purely on play mechanics. No thought was put into the visuals at all at this point; the focus was solely to make the gameplay interesting. Then, after playtesting, if we thought the gameplay was solid we’d have our writer come up with a concept for what it should look like and what the lore should be to make it fit within the overall game world. Those designs were reviewed by a small group of department leads and once approved were distributed to a large team of artists.

In terms of the stylistic direction, that initially came from our creative and art leads who wanted to create a world that was an appealing fantasy but not overly dark or overly cute. We’re somewhere in between.

Matt S: Obviously you’ll want your game to sell well and be a commercial success, but putting the commercials aside – what will define success for you with Monster Train? Are there any particular responses that you’re hoping for from the player base, and what kind of audience do you want this game to resonate with?
Mark C: Outside of the commercials my greatest goal is to create a game that a group of people truly love and remember for a long time. I want players to think “this is the best deck building game I’ve ever played.” The team and I are all working very hard to try to make that happen.

As for what audience we’re aiming at – card game fans and strategy game fans. Like I said, Monster Train is not a CCG, but I think it does still appeal to people who play games like Magic and Hearthstone.

There’s an A-Train game in development for Nintendo Switch!