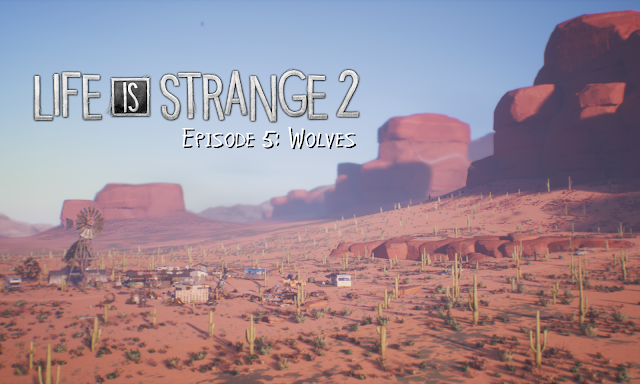 Even sitting down to write this review, I’m nearly in tears. It’s strange, because up to this point I haven’t been terribly emotional about Life Is Strange 2. It absolutely tugs at the heartstrings, but to this point my tears have been scarce. Or maybe I was just saving them all up for the end. I hate endings. But I’m ready to sit down and hash this one out.

Before I begin, it’s imperative I give you a warning: This article includes full spoilers for both Life Is Strange and Life Is Strange 2. I can’t talk about Episode 5 – Wolves without completely giving away one of the endings and a lot of information leading up to it.

Related Reading: Look back at the beginning of LIS2 with Lindsay’s review of the first episode.

When we last left the brothers, Sean had rescued Daniel from a Christian cult with the help of their estranged mother. Sean and Daniel have been through hell: death, racism, an explosion, and the aforementioned cult were all made more complicated by Daniel’s newfound supernatural abilities. Seven weeks after escaping the cult, the brothers are temporarily living with their mother in near-isolation, at a place called Away, Arizona. Their plan remains in place: flee to Mexico and their father’s family before being arrested for their trail of destruction.

It’s in Away that the game nods at its predecessor for a second time. Early on, Sean and Daniel passed by Arcadia Bay; this time, they’re face to face with one of its former residents, none other than stepdouche David himself. Depending on your end to Life Is Strange, the photos on his fridge change. It was quite unexpected to find David out in the middle of the desert, living in a trailer, but here we are. There’s even mention of him in Sean’s journal. 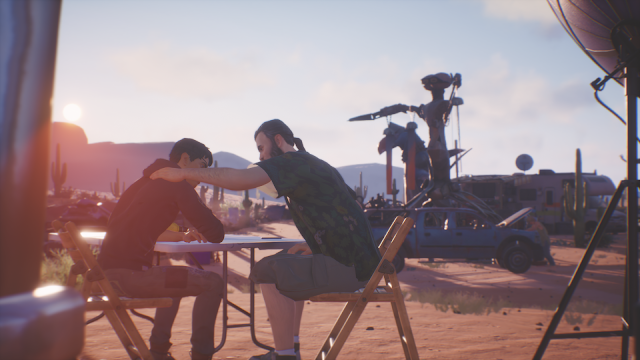 This episode relies heavily on Daniel’s powers, moreso than any up to this point. The folks in Away are all aware of his abilities, and fully accept them, but we all know the world wouldn’t understand. Still, without Daniel’s supernatural ability, things would be going very differently for the brothers. I even feel less lonely than I did in the last episode, where I was often on my own looking for Daniel. Now that he’s back and we can interact again on a regular basis, the dark cloud hovering over the brothers has lifted (a bit, and for now).

But good things can’t last, and with the FBI on their trail Daniel and Sean have to quickly flee Away and leave their mother behind to take the heat. They don’t want her to be found, but she insists; I think she feels guilty for leaving them all those years ago. The entire mother scenario is a lesson in learning to forgive parents. I learned a very long time ago that parents are just as imperfect as the rest of us, and sometimes they make decisions they can’t take back. Sean and Daniel’s mother, Karen, left them when Daniel was young, but when push came to shove and Daniel was in danger, she was there for him. Through their seven weeks in Arizona, I picture Daniel becoming especially close to his mother while Sean remains weary of her. Based on my decisions in the game, the end result was forgiveness, at least in my eyes. And forgiving your parents can be an incredibly powerful life decision.

So with that in the rearview mirror, the brothers make the final sprint for the Mexican border. When they reach the wall at the border, going as far as they could see in either direction, Daniel begins to question it in his childlike way: “Why would they build this? … Is there a wall like this up north?” Way to hit the nail on the head, ten-year-old kid. 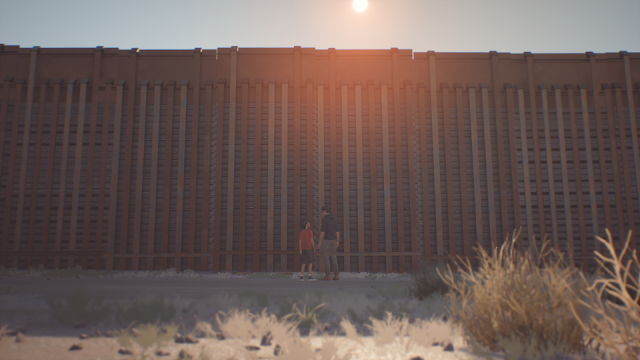 Through the game, Dontnod has made its thoughts on current American politics clear. It is against the wall, against casual racism, and against targeted racism. Taking such a clear stance could alienate some players, but I applaud the developer for directly addressing what is wrong in the world right now. Racism rears its ugly head again as Sean and Daniel are caught by hicks trying to guard the border, and then of course border patrol gets involved. The brothers are in a very precarious position.

I’m realizing that I don’t know how I expected this entire situation to end. Clearly the brothers have committed several crimes, and maybe don’t deserve to be safe in Mexico, but darned if I don’t want them to make it. As an agent says in the game, “everywhere you went, something blew up.” They are legitimate criminals but I expect an end of rainbows and butterflies.

And darned if I didn’t get it. 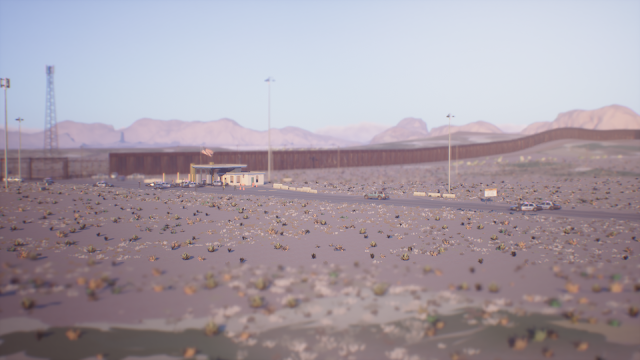 My ending was perfect and I’m thrilled it’s what I’ve worked towards: Daniel makes an incredibly brave and incredibly unexpected move by scarfing himself so Sean could be free. As his “brother” for all this time, I’m filled with both pride and heartache. Needless to say, this is the exact moment the waterworks began, and I sat there ugly-crying for the last ten minutes of the game. “My” Daniel is self-sacrificing and caring. He truly does not want anyone to get hurt. That includes Sean, who is on the hook for their path of destruction due to his age.

The conclusion of Life Is Strange was controversial to say the least: the entire game placed importance on choices, yet the choices hardly mattered in the very end. Philosophically, a success, but critically, not so much. Clearly, Sean and Daniel aren’t on that path, with seven different ending available. Not only do you have an actual choice presented at the end, it’s clear that every word spoken to Daniel and every action done in front of him has had a lasting impact. Their fate really lies in the player’s hands. You can view all endings below (major spoilers ahead):

Life Is Strange 2 has been a wild, unexpected ride. It’s not an exaggeration to say I had several moments where my jaw just dropped in awe of what was happening. The game explores themes such as brotherhood, family, forgiveness, and racism. The relationship developed between the brothers is the glue that held everything together, which became obvious when I lost Daniel and it’s as though half of my heart was gone with him. With the multiple endings, I know my choices mattered, and that gives me that feeling of pride based on the ending I received.