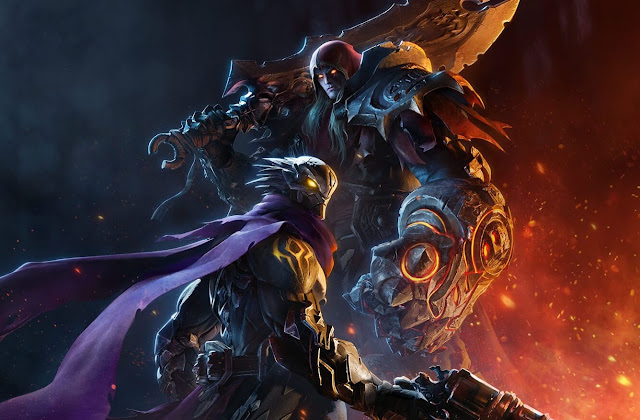 I could feel that something like Darksiders Genesis was coming. Though the first two Darksiders titles were impressive games, they were also beholden to a kind of design that was never going to stick around. Darksiders 3, which I generally enjoyed, nonetheless showed just how difficult modernising that formula is. However Darksiders as a property is too important for THQ Nordic to ignore, and so here we have Darksiders Diablo… I mean, Genesis.

Related reading: Also from this year, Darksiders 3. Our review!

It’s really good, too. It’s a lot of fun and offers pacey, exciting action. It’s a bit of a brainless delve (as most Diablo-likes are), but featuring two of the four horsemen, there’s some great interplay and dark humour going on, which makes the adventure itself a lark. Throw in all the demons and imagery from hell, and this is still a game that builds on the ongoing Darksiders setting and lore, while also being a far enough break that the developers could approach it from their own angle.

So you’ve got two of the four horsemen. One dual-wields pistols. The other has his brutally effective sword. The dynamic between those two is such that multiplayer is clearly the way to push through Darksiders Genesis if you can, but as a single player experience you can still switch between the two… and you’ll want to, as various combat and non-combat situations will better suit one or the other. Both control well, though it doesn’t take long for the sheer number of skills to become almost overwhelming. Within the first hour I had to start making decisions about what active skills I’d carry into to battle, and which I would bank away and forget about, and in some ways this speaks to the deeply attention deficit nature of modern videogames – developers seem to be worried that if you don’t keep throwing shiny things at players to distract them, they might get bored. Darksiders doesn’t have the loot system of Diablo, so it seems that instead the developers decided to keep throwing mechanical features at players to provide variety. 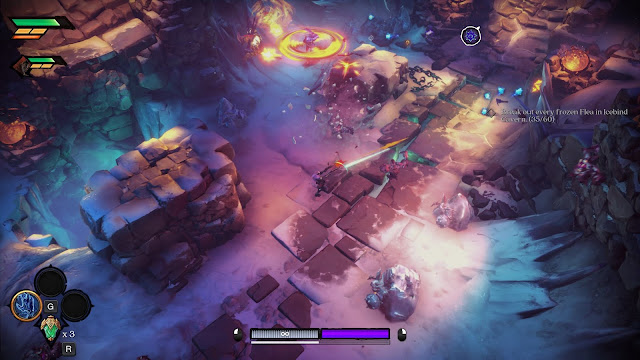 Darksiders has never just been about the action. The earlier titles were inspired by Zelda, and thus featured plenty of platforming and puzzle solving. The third one took its best crack at Dark Souls-like environmental exploration, while also keeping those puzzles going. So it should come as no surprise that Darksiders Genesis… has non-combat elements! Yep, you’ll need to do the occasional platforming, wall climbing and puzzle solving, and though none of those elements are difficult enough to be time consuming, they are a break from the action. I didn’t find them to be particularly inspired, but they did enough to remind me that this is Darksiders, and it is its own unique thing. The same goes for the horse riding stuff – at points you can mount your horse (you are, after all, playing as a horseman of the apocalypse), and while this is almost entirely superficial, since it limits what skills you can use, and objectives are rarely far enough apart to bother summoning up the beast, it does help to go for a ride a couple of times, purely for fun.

What I was less impressed with were the environments. Look. I know that designing hellscapes in video games is a challenge. You can go all-out and inevitably end up upsetting people, like the developers of Dante’s Inferno and Agony did. Hell is the actual cesspool of a pure kind of evil, and technically it should be shocking and offensive, but that doesn’t make for great commercial content. And so most developers end up going with option “B” – a creatively bereft barren wasteland with some fires and oceans of lava. Evil is, apparently, an endless rocky desert in a volcanic region. I didn’t like when Doom took this approach, I don’t like it here.

The problem is that a “journey into hell” should have certain implications which never seem to be explored by these games. It can be fetid and vile, as Dante described it. But it can also be colourful and vivid. Just take a look at a Hieronymus Bosch’s painting and try telling me the endless rocks, magma and iron chains of most video game hell designs deserve to be called creative. Those artists were using hell to convey specific thematic meaning, however. Most game developers are just out there creating entertaining content, and so the level design of Darksiders Genesis ends up feeling shallow, dull, and nowhere near what the inspired action of the game deserves. Darksiders does benefit in that its hub-like structure allows you to visit some mild alternatives to the barren rocky stuff, such as a barren snowy area, or a barren “generic green atmosphere” area, and a number of other “hostile” environments, but none of them are any more convincing as parts of hell. 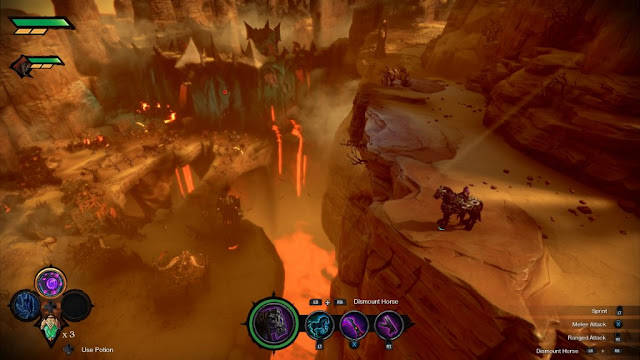 That same issue follows on to the enemy designs. For one thing, there aren’t that many different types of enemies that you face down, and my impression of hell, from having read stuff like Dante, is that the monstrosities that inhabit it should not look like they’ve come off factory lines like they’re Funko Pops (which, for the record, are everywhere in hell, as looking at them is a form of torture). Secondly they’re all very… rote, with the developer checking off what you’d expect to see from a bunch of demons rather than throw anything at you that would surprise and/or actually terrify you. This is a disappointment for the same reasons that those settings are disappointing. I fundamentally believe that hell should be the last thing that settles for just meeting expectations, and I’m consistently disappointed with the lack of creative flair from game developers that attempt to do something with it.

There are a couple of other more minor issues that I had. The camera is zoomed up close enough that there were times that enemies were menacing me from off-screen, which is always annoying. At the same time, the camera was scaled back just enough that when I was in the middle of a melee, it was hard to make out what was going on. There are fine lines in these things, because Diablo-likes rely on the enemy swarm, but I took a little too much damage a little too often trying to work out what was actually going on in the heat of things. Additionally, while Darksiders Genesis is generally pretty linear, there are all kinds of sidequests and bonuses to find along the way, and the game’s map system is absolutely terrible at presenting information.

Darksiders Genesis gets a lot right. It has plenty of personality and a dynamic, engaging action system. Its only real problem is that it has tackled a thematic challenge that it can’t deliver – hell should not be dull, empty or repetitive, and yet this game fails on all fronts there. It’s not entirely the developer’s fault, in the sense that if they showed a truly creative vision of hell it would either offend or be too surreal for the kind of mainstream audience that it’s pitched at, but perhaps developers need to better consider where they’re setting their games in that case.