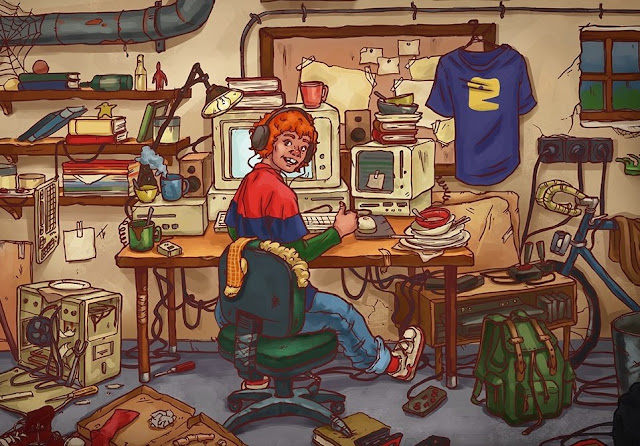 I have wanted a genuinely deep game development business simulator since Kairosoft’s brilliant Game Dev Story. That breakout hit was, as with all Kairosoft titles, a hyper-casual little time waster where it was impossible to fail, but the sheer charm, brilliant visuals, and catchy loops also made it impossible to put down. There are plenty of other serious simulators out there, but not many tackle the task of running a game development business. Mad Games Tycoon has given it a crack, but if you want to get meta about this, if you were to produce Mad Games Tycoon within Mad Games Tycoon, the response from the virtual would not be overly positive.

As far as the stated intent goes, Mad Games Tycoon is a success. You do indeed get to build a game development business up from scratch. Starting out in your parent’s garage with some seed money, you’ll get to hire a couple of people, and throw a lounge and TV screen into a spare room as the “staff room.” That’s about all the room that you’ll have, but thankfully it is the roaring 80’s and you only needed a small team, because you’ll only be able to create ASCII and 4-colour games for primitive consoles and PCs, within super-limited genres. After a while of labouring with incremental income improvement thanks to a lot of contract work, you’ll be able to move to a proper office, where you can start to add training rooms, research up new genres and game technologies (sprite art! 16-bit music!), and start to compete with the big guns.

After a couple of decades you’ll have large office spaces, creating high-definition games to support your own consoles. You’ll have a large team of staff, and you may well be the one making the acquisitions. That is, of course, as long as you can keep the customers coming in, because unlike Game Dev Story, success is not guaranteed. The first time I played, I was making reasonable money from churning out a lot of cheap games, and barely supporting them post-release. But then I invested in a terrible license, developed a real stinker around it which I dropped on the market, which reviewed so terribly that it won the “worst game of the year” award, and I lost my entire fan base. Sales fell off a cliff, and while I struggled to recover, I started to find it more difficult to keep up with industry trends… and all of this was still happening in the 90’s. 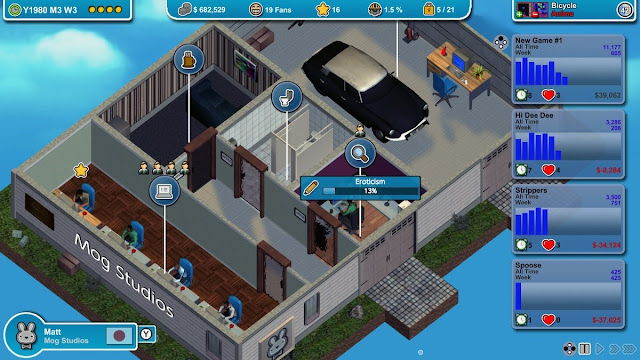 That’s not all, either. You’ve got to care about your staff (hah, talk about a fanciful vision of the video game industry). You’ve got to make sure they’ve got a nice area to relax, a good bathroom to use, and all the heating and aesthetic elements (plants, paintings) to enjoy their time at work. You’ll also need to make sure you’re training them, so they get better at their jobs, and you’ll need to split your teams across a couple of different areas; you’ll need some dedicated to research, some to office management, some for QA, some for community management, and then the coding team itself. There’s a lot to balance, and it can become very easy to lose control of your company’s finances. If there’s one thing I really enjoyed about Mad Games Tycoon, it’s that you really do have the sense that a single failure in the market is going to end your business.

What immediately lets the game down is its catastrophically bad interface and presentation. I get that it was originally a PC title, and therefore optimised for mouse and keyboard, but building new rooms and designing your environment is a cumbersome process that beggars belief. More than once I had to start right back from the start because I made a mistake in layout and it just wasn’t worth trying to fix it. Coupled with a menu design that looks straight out of a high school game project, and Mad Games Tycoon comes across as a title developed by a team that didn’t care much about the “graphics” rating of their own project.

Game Dev Story’s appeal was always in the bright and colourful cartoon presentation that really drew you in and made you care about your little team of people. to this day when I sit down to work, if I am struck by a particularly positive moment of inspiration, I actually imagine the little icons that would float above my Game Dev Story people’s heads as they went on “fire” and worked up a storm. I think of that because Game Dev Story has character and personality in spades. In comparison, with Mad Games Tycoon, I didn’t care about anything that was going on. My staff all looked like the kind of placeholder characters The Sims developers might use to test the game before putting the proper art in. Each time you finish “developing” a game, you’re given a “screenshot” of it, but these are all the same based on genre and game development era, and have nothing to do with the types of games that you’re developing. Setting my studio up to develop adults-only games, and getting treated to bright cartoon “screenshots” that are meant to represent my game is a disconnect that Game Dev Story wisely sidestepped by never attempting to visually represent the vast variety of games you could produce. 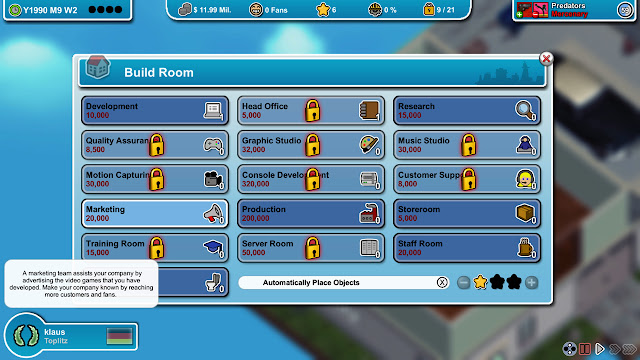 And of course there are all kinds of bugs and design issues that just cheapen things further. There’s no character limit on what you can call the game in the text entry, but in-game the title would be cut off after just a few characters, to you’d come up with a great name only to have to then come up with something else. There were times that the controls simply stopped working entirely, meaning that you needed to exit out of whatever menu you were in (including the game development one) and start again.

What really killed my interest in Mad Games Tycoon, however, is how arbitrary success can feel at times. Sometimes your little characters would be just that much more effective at their jobs than at other times, no matter how well trained and rested they were. When that happens, no matter what you do, your game is simply going to bomb. You’ll also get punished for focused too hard on a niche, and the metrics that you need to decide between seem to be… odd to say the least. Having to decide between “story” and “game length” when creating an RPG?!? Have the developers of this game never actually played an RPG? And why must fans be such generalists? If I want to focus on story-focused hardcore adult RPGs, why do my fanbase keep telling me to focus less on graphics? Because I tell you what, graphics are absolutely important to that niche.

All these little issues and inconsistencies really wear down on what might have otherwise been a good, deep game. As it is, however, Mad Games Tycoon is less about creating the game development studio that you want, and more about guessing the kind of game development studio that the developers want you make. Yes, it’s fine to have popular genres and thematic combinations, just as in the real world. But game developers make profitable businesses out of niche topics, and fanbases for those topics have specific tastes with how they play their games. The inability for this game to recognise this makes Mad Games Tycoon feel very, very arbitrary indeed (or alternatively if the game does recognise this, it’s handled far too esoterically to be noticeable or enjoyable). 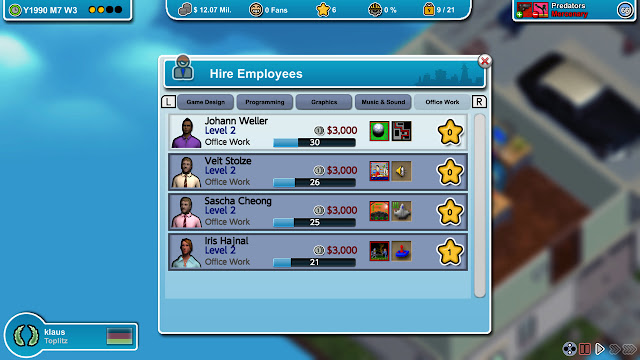 Mad Games Tycoon is a noble attempt to do something really cool. As someone who loves tycoon simulators, and loves video games, the dream is very much there to have something more serious and deep to replace Game Dev Story. Unfortunately Mad Games Tycoon also struggles to give you a genuine sense of ownership over what you’re doing. A very pedestrian presentation, and a sense that you’re being pushed to play in a specific way is very antithetical to how the overwhelming bulk of the real world games industry works.