Microsoft partners with Dontnod for Tell Me Why

It’s time to dust off that Xbox One, as there’s an exclusive game by Dontnod on the way. Tell Me Why is a gripping narrative adventure coming to Xbox One, PC, and Xbox Game Pass beginning next summer (which means it will be episodic, as is Dontnod’s stunning Life Is Strange franchise, but there are only three episodes). Here’s the reveal trailer:

Tell Me Why is set in small-town Alaska, where twins Tyler and Alyson use their bond to unravel memories from their troubled childhood. “The core mechanic of the game is the special bond Tyler and Alyson share and is also a theme strongly anchored into the DONTNOD storytelling approach,” explained Florent Guillaume, Tell Me Why‘s Game Director, on the Xbox website. “Over the course of the story, players will explore the identical twins’ different memories of key events and choose which memory to believe. Ultimately, the choices players make determine the strength of the twins’ bond—and the future course of their lives.”

The current focus is on Tyler, despite both twins being equal heroes in the story, due to his identity as a transgender man. “Microsoft and DONTNOD have approached Tyler with a real commitment to authenticity,” explains Nick Adams, Director of Transgender Representation at GLAAD. “Tyler is a fully-realized, endearing character, whose story is not reduced to simplistic trans tropes. Creating a playable lead trans character – and taking such care to get it right – raises the bar for future LGBTQ inclusion in gaming.”

Our Xbox would be quite dusty right now if my spouse didn’t use it; I’m a PS4 girl through and through. Things may change next year, though, as nine Final Fantasy titles are set to hit Xbox Game Pass beginning next year. The games will also be available on Games Pass for PC. 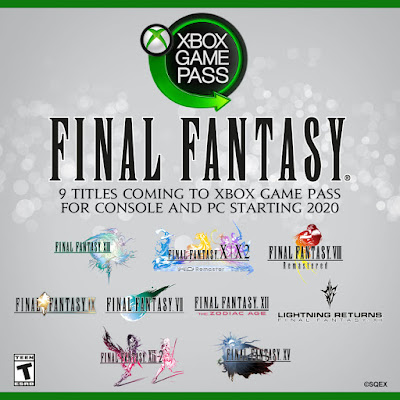 Xbox Game Pass is a subscription service that gives players access to what seems like a bajillion games; it can be used on Xbox One or PC, although some games are limited by platform.

Last Stop coming to consoles and PC next year

Developer Variable State (best known for Virginia) and publisher Annapurna Interactive have announced Last Stop, a game about secret lives, the ties that bind, and how magic is found in the mundane. It will be coming to consoles and PC next year; Xbox One is the only console currently confirmed. Here’s Last Stop’s announcement trailer:

Last Stop is a single-player narrative titles set in contemporary London. Players take on the role of three separate characters whose world collide during a supernatural crisis. You make choices to shape conversations while walking in their shoes and learning of their pasts.

The narrative isn’t everything, though: the original soundtrack is composed by Lyndon Holland, the composer who scored Virginia, and is performed by the City of Prague Philharmonic Orchestra. Seriously, an indie game with a soundtrack performed by an orchestra. It’s wonderful!

The Artful Escape being released on Xbox, Apple Arcade next year

Annapurna Interactive had a busy week; in addition to announcing Last Stop, it announced The Artful Escape by developer Beethoven & Dinosaur. Here’s the trailer:

The title follows Francis Vendetti as he battles the legacy of a dead folk legends, and with his own imagination. A teenage guitar prodigy, Vendetti will be launched into a psychedelic, multidimensional journey with the goal of inspiring his stage persona. The stage persona is up to you, from his backstory to his sequinned facepaint

The game is kind of trippy, and Vendetto traverses landscapes made of sound. The world becomes an instrument as he walks, runs, jumps, and more through the multiverse. He’ll meet and speak to loads of characters, from publicans to alien wildlife.