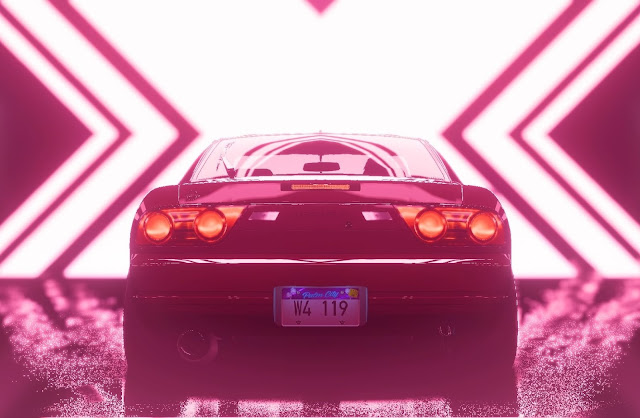 Need for Speed is a franchise which needs little introduction; it’s celebrating its 25th anniversary with 2019’s entry, Need for Speed: Heat, and for its long and illustrious history it’s always been a fixture on the console market. The series has been EA’s eminent basically-one-release-a-year homestay long before Battlefield and Call of Duty went head to head. We’ve seen Need for Speed grow and shrink, ride the waves of racing fads and reboot itself end-on-end. But it’s a testament to the franchise’s solid core gameplay loop (and Need for Speed: Heat’s no-nonsense implementation of the formula) which keeps the games relevant and comforting, something like gaming’s equivalent of Law and Order.

The franchise’s success can be attributed to its genre trappings – while it is, categorically, a racing game, it’s much more aptly described as a car-themed fantasy. It joins the ranks of (and predates) the Burnout and The Crew series of games, which are more about the kinetic thrill of racing than actually simulating what it feels like to be behind the wheel. And although Need for Speed leans a little more towards the realistic side, it’s still certain to frustrate those who enjoy a more faithful simulation (for that, we recommend Gran Turismo, or GRID). Need for Speed is supposed to be about car-chases and crashes, bright neon lights reflecting off rain-splashed asphalt, spunky racer friends who goad you into joining their crew, and most of all, the joy of being behind the wheel. And measured to these criteria, Heat thankfully does not disappoint.

Whereas past Need for Speed games have tried their best to latch onto ongoing trends such as tuner culture, imports or muscle cars, Heat has everything under the hood and more. From the very beginning you’ll chose an avatar to represent yourself as well as your starter car, which could be a muscle car, a tuner or an exotic. There’s a funky matrix to help you meld your car into its desired performance too – balancing between road-racing and off-roading on the X axis, and between tight cornering and drifting on the Y axis. For the most part, any setup of stats will be enough to win the game’s story races (with enough grinding for upgrades of course), so I appreciate that the game still lets players express themselves with their own car preferences and driving style. 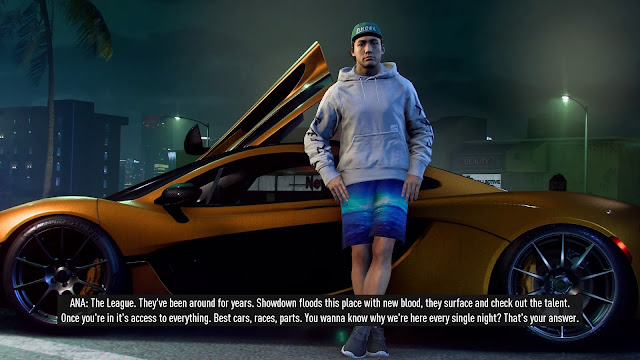 The Need for Speed games have always been fairly modal depending on whether the player prefers to lean closer to the realistic or fantasy side of the genre, and that ethos appears clearly in Heat. Players can choose to drive during the day, in which they can compete in sanctioned events, or at night, where they can access a completely different set of illegal street races.

The daytime events are akin to a traditional racing sim; they cordon off the open world into a circuit of tight twists and turns, with crash barriers on either end to slow down those who drive carelessly. The daytime is all about effective cornering, following an unmarked racing line, and judiciously managing speed. By comparison, the night-time events are free-flowing and chaotic. The races tend to be longer sprints or simple circuits on city streets with no racing barriers: cutting corners is fair game and so is nudging opposing racers into oncoming traffic. In the night-time patrolling police can engage pursuit mid-race, and if you’re happy to suspend a little disbelief, you’ll be rushing down glittering highways with the cops on your tail and the resultant thrill is glorious.

That alone is what makes Need for Speed: Heat worth your time: if that fantasy of a stylish, playable Fast and Furious movie tickles your fancy, you’ll be well at home here. Many of the game’s decisions eschew traditional racing and action game design in order to better fulfill this fantasy – it’s an admirable show of forward-thinking yet restrained design, and for the game’s great length I was thoroughly satisfied with no shortage of things to do, places to see, cars to collect and rivals to dunk on. The rest of this review will mostly take a magnifying glass to the fantasy, taking a look at the intricacies which might make or break the suspension of disbelief for those who might not be long-time fans of the series. 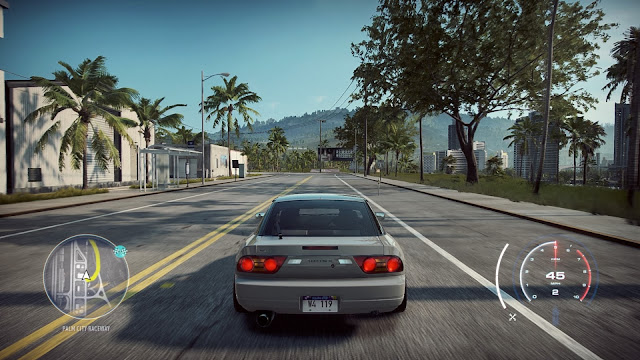 First thing to be aware of is to temper the expectations of exactly what Need for Speed: Heat’s open world will entail. The Need for Speed series has been open world since the early 2000’s, but with mixed results. At best, the glitzy pedestrian-less cities behind each title can serve as a reminder of each game’s scope and ambition, and can begin to feel like a fondly remembered home. But at their worst, they can feel like a glorified level-select screen, where players need to drive to their next objective to advance rather than simply picking it from a menu.

Need for Speed: Heat’s open world unfortunately falls into the latter category. The locale of Palm City, a fictionalised Florida, is enormous and diverse. On the eastern side you’ll be met with skyscrapers encroaching upon sandy beaches, bridges over inlets and bayous, and on the west side you’ll come across farms, marshland, and then a smaller city as well. Driving from one end to another at top speed, you’ll still take about 5 minutes to get across. But although the open world is large, I found that most events and circuit races didn’t use the map’s size or diversity to its advantage. The game’s various districts did not feel too different; it was still the same circuit races and sprints no matter where I went. And although the visual landmarks are eye-catching and easily recognisable, I still never quite got that feeling of home.

It doesn’t help that despite its size, Palm City is not particularly dense. There is a lack of sprawl in the game’s city zones; few overpasses or bridges or highways, mostly just a grid that makes getting from Point A to Point B a monotonous affair. There are not many interactable objects either; occasionally you’ll come across a speed gate, where you’ll need to be driving above a certain speed to get an achievement. There are also a few billboards to drive through, and street art to inspect. But there’s a conspicuous lack of shortcuts and secrets, which makes the game’s world so much more exhausting to drive across. 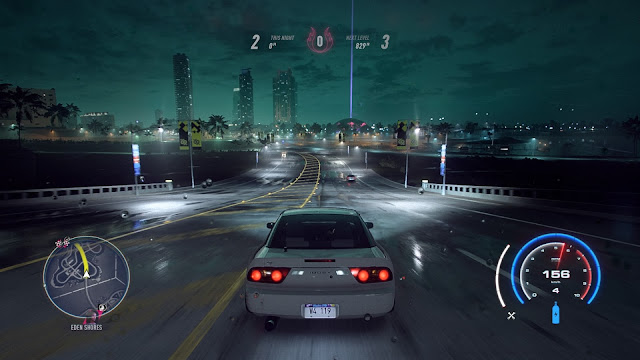 The game’s grand vision also stumbles a little in the night segments, which include some tedious elements that unfortunately cannot be skipped. Heat contains some light RPG progression elements; players will need to unlock better cars and deck them out with better parts if they want any hope of beating the more difficult races. You can do pretty well in the daytime events just by having good cornering and mechanical skill, but the longer stretches in the night-time races practically require an upgraded car. Day events reward the player with money while night events provide rep. Money is important to buy upgrades with, but the upgrades remain locked until the player gets recognised as a key figure in the street racing scene. Night events thus are crucial for progression, and players will be forced to be a master of both, rather than being able to favour the daytime simulation racing or the nighttime police chases.

Speaking of the police chases, their implementation is a little flawed in Heat compared to previous entries in the Need for Speed series. In classic racer vs. cop entries in the series such as Hot Pursuit or Most Wanted, the thrill came from outsmarting the police AI by predicting how they would try to stop the player, and driving in an agile way to evade the police’s countermeasures. But in Heat, the police are decked out with sports cars, and as absolutely awesome as that looks, it means that the red and blue lights will always be stuck on your tail, with little means to shake them off. Couple this with the grid-like levels devoid of creative shortcuts or other opportunities to elude patrol cars, and police chases start to feel more like tedium than a fun gameplay mechanic. It’s particularly egregious how Reputation earned through nighttime street races needs to be stored in the safe house before it’s considered legitimate – and the minute it takes to drive to the safe house will be the most nerve wracking one in the entire game; in which you follow traffic laws as closely as you can in order to not arouse suspicion, and risk losing a hefty chunk of the rep you just earned.

This is my main gripe with Need for Speed: Heat – when playing, I want to feel like I’m front and centre in an action movie; and this fantasy is only fulfilled some of the time. Take the collision physics for example: Need for Speed: Heat plays this one fast and loose, letting just about any obstacle bounce off your car without severely damaging your speed. While it does look silly for a metal lamppost or a substantial tree to be no impediment to a speeding car, most fantasy car chases don’t end unceremoniously from nicking a substantial tree. I’m happy to suspend my disbelief there. 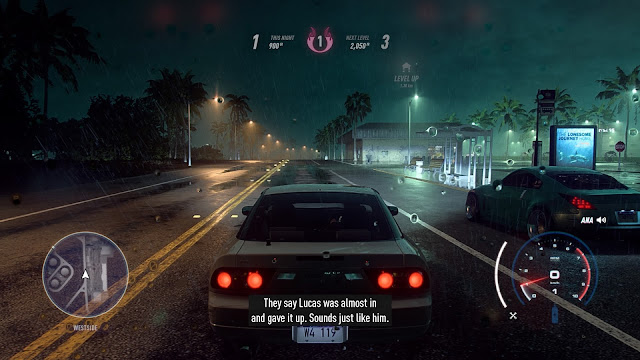 But considering the police chases, in action movies the hero always escapes with a hair’s breadth, while in Heat I’m often clumsily getting surrounded by five police cars. I rarely feel the sense of properly outsmarting the law enforcement; either I get caught, or I drive so safely that I never arouse any suspicion. The game rarely lets me indulge in the fantasy that previous Need for Speed titles did so effectively. It’s even reflected in the plot, which aims to be a little darker and edgier than previous fare; in Heat, the whole of Palm City is under the fist of a crooked, overzealous crusader against street racing. In 2019 the notion of police abuse of power as a plot device for player empowerment feels a little awkward, and it makes the game’s later plot twists much harder to swallow.

Overall, when Need for Speed: Heat is producing its promised fantasy, it’s a wonderful game which I’m always happy to keep coming back to. Ghost Games have improved their engine and systems to make the city and cars feel better than ever, and Heat’s core gameplay loop is designed to last. Occasionally there are the moments which require suspension of disbelief, and it’s possible for the more misguided elements to build tedium in an otherwise strong entry to the series. Heat is a marked improvement on the last few Need for Speed games, however, and I hope that further refinement will see the series better deliver on its legacy.