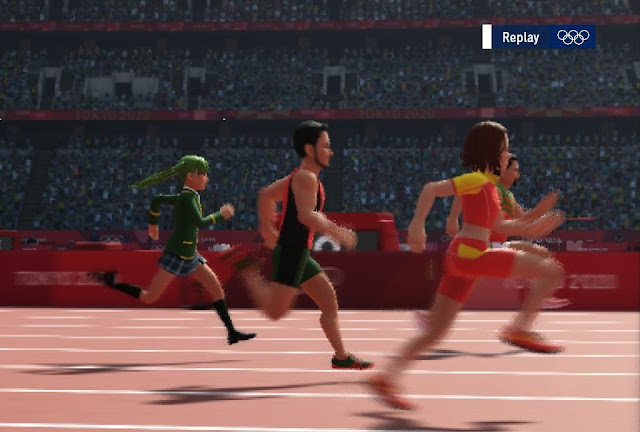 Video games based on the Olympics have always been patchy in quality. In trying to recreate as many sports from the Games as possible, the developer rarely does better than to turn them into mini-games, and often those don’t do a very good job of representing the sport at all. Tokyo 2020 is, I am very pleased to say, so much better than most other Olympic video games, although it is strange that the game would be released, fully localised into English, in Japan in 2019, and a year before it’s set to release in the west.

Ah well. Thanks to the Switch being region free we can all play the full game now.

One of the issues with too many efforts at the Olympics is that those mini-games all play like one another. What’s the point of having a 100m and 200m sprint, for example, if all you’re doing in both cases is mashing the sprint button as hard as you can? One of the areas that Tokyo 2020 immediately stands out is that it has a good range of different sports represented, and they all play differently. In addition to the sprinting and swimming, across the 15 sports, you also get tennis, beach volleyball, BMX, baseball, football, boxing and cricket (just joking on the last one). There are some noteworthy omissions. For example, where’s rhythmic gymnastics? Or handball? Or rowing? Overall, however, the roster of events is good and varied, and there are more to come, with rugby sevens (September), judo (November), sport climbing (February) and the 4 x 100 metre relay (April) all to be free updates down the track.

So good at swimming can medal wearing a schooluniform #NintendoSwitch pic.twitter.com/lHyO0CBJ8b

None of these sports are the full simulation as a dedicated sports game would be. Football is not of the complexity of FIFA. Baseball isn’t MLB the Show. Beach Volleyball isn’t even that much of a step above Dead or Alive Xtreme 3’s minigame… and that one was there more to show of women in lingerie – I mean “swimsuits” – than it was the sport. Nonetheless each game is nicely designed and presented, and as a pseudo-arcade take on the sport, each one plays well and gets the job done. There’s plenty of room to get better at each sport, but at the same time, it takes exactly no time to understand how to play any of them, so it’s easy to jump into right away.

The accessibility is important, because Tokyo 2020 is all about the multiplayer experience. Local multiplayer is a hoot, because taking on a friend to see who can bash the run button faster is an enduring thrill that is still as enjoyable now as it was with Konami’s Track & Field way back when. The game naturally tracks all your records and best performances, so you can trash talk with confidence. Sadly as a single player game it’s a little lonely and limited. Each event gives you a qualifying, semi final, and final to play through, and the final is so brutally difficult that I ended up being happy to settle for silver. Online is a lot of fun though. Just like the Olympics run to a schedule, in Tokyo 2020 there is a rolling schedule of three events every hour, and a fully ranking system to encourage you to get really, really good at your favourite sports. Being in fourth place with one final jump in hand in the long jump is a far more intense experience than it has any right to be. Actually nailing that last jump, without fouling, to jump up to a medal spot is also more exciting than it has any right to be.

This isn’t Mario & Sonic at the Olympic Games, but unlike some overly bland previous attempts at a “proper” Olympics game, SEGA has embraced the nonsense with this one. Characters are bright and cartoonish, and thanks to some comprehensive creator options, there’s no end to the ridiculous stuff you can create. Naturally, of course, I made a green haired twintail athlete from Japan. I’ve been so proud watching her rake in the medals…

There are also so many costumes to play with. In addition to a standard “realistic” version of each sport’s costume, you can earn points from playing, and spend those on everything from school uniforms, to maid costumes, traditional Japanese wear, superhero costumes, space suits, the Tokyo Olympics mascot, and swimwear. What’s more, you can mix and match these costumes by event. Want to wear a beach volleyball bikini while BMX racing? You can do that, and it’s awesome. Want to prove how good you are at swimming by winning while wearing a heavy school uniform? Have at it. Playing around with the costumes adds a great sense of colour and humour to the events… particularly once you go online and start running into the weird and wonderful costumes of other players.

Also contributing to a really positive spirit behind the game is the way each and every event is mixed. My Miku was beating up the most musclebound dudes in the boxing ring, sprinting right alongside both male and female runners, and hitting pitches thrown in by men right out of the park. The Olympics has always been an event that is built on the premise of inclusively and a celebration of athleticism, so it’s great to see the game really reflect that in this way. It would have been nice to have seen some paralympian options in there too down those lines, but then again the Olympics and Paralympics are separate events and likely would have required additional licensing.

It would have been nice to see some form of career or story mode – the Olympics also being all about telling great stories of athletics – but given the budgetary constraints that Tokyo 2020 was likely developed under, the focus on simply getting the events right is probably the right decision. I also would have liked to see the developers take the opportunity to teach audiences a little about Japan, given that one of the big benefits of the Olympics is that it exports the host nation’s culture, and this year around the game developer and the culture come from the same nation. But, given that previous Olympic titles have been rather dry, and this one lets you create Hatsune Miku, before having her swim like a maniac in a school uniform, it a way Tokyo 2020 is at least sharing something about the cost nation’s aesthetic and sense of humour.

As everyone knows, I love Japan. I’m also a die hard fan of the Olympics, and a person that sets up four or five screens as the Olympics runs in order to watch as many different events as possible. I’ve been looking forward to both Tokyo 2020 Olympics ever since the country won the opportunity to host the event, and this game more than satisfies me as a fan of all of the above. Once again, import it, as it is fully localised in English, and if you ever see a green, twin-tailed girl setting records while looking awesome in a school uniform, be sure to send me a digital wave.