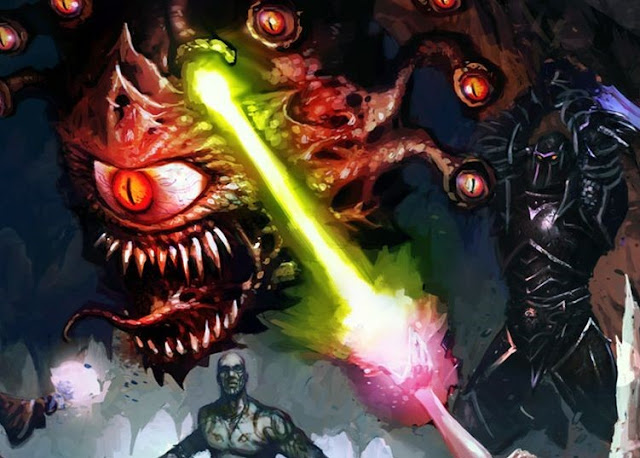 Two of the greatest western RPGs of all time, released on console for the first time, is not something that should be overlooked. Certainly some people will look at the “dated” presentation of these titles and turn away, but doing that would be missing the point completely and, to this day, Baldur’s Gate and its sequel are truly compelling examples of fantasy writing done well, no matter how they “look”.

Baldur’s Gate wasn’t the first RPG to do open-ended quests and non-linear storytelling. It wasn’t even the first title to do it within the context of the Dungeons & Dragons property. Before BioWare came along, SSI had the Dungeons & Dragons license, and released titles such as Dark Sun: Wake of the Ravager where, for just one particularly memorable example, if you retreated from an assault on your (only) ally’s compound, the entire faction was killed, turning the area into one truly deadly dungeon, and killing off some critically important characters. However, Baldur’s Gate made this approach to storytelling uniquely accessible, giving players the prods they needed to encourage them along set storylines, but never mandating that they followed any particular direction.

To this day I’m finding new ways to be delighted by Baldur’s Gate, and that’s after at least a half dozen times through it. There are dozens of different characters that you can draw into your party, each with their own moral core (which can significantly impact on how you interact with the world, and how the narrative plays out), and completely optional storylines. You won’t experience everything that Baldur’s Gate has to offer in any one single run, and we’re not talking about relatively superficial differences here; entire quest and plot lines are going to be locked off to you completely.


It’ll be difficult to decide which characters and quest lines to take on, too. Every character and their situation is memorable in its own way. Almost every fan of RPGs knows of Minsc and his ridiculous miniature “giant space hamster” pet, but he is by no means the only character that you’ll come to love for their eccentricities. Every part of the Baldur’s Gate world is likewise distinctive and interesting; the furthest flung corner of one wilderness area will let you meet Drizzt Do ‘Urden himself (the hero of a very popular series of pulp fantasy by R.A. Salvatore). Elsewhere you’ll get to lock horns with the iconic red-robed Wizards of Thay. The titular city of Baldur’s Gate is a massive, sprawling gateway to adventure, but even the smallest village of Nashkel has plenty of intrigue, from the main plot point through to the wealth of optional side-stuff you can do.

This is all just Baldur’s Gate, where you start out at humble level 1, and it takes a while for the enemies to graduate from annoying little dog-rat monsters (kobolds) to move to the really interesting monsters and complex combat scenarios. Baldur’s Gate 2, where you start at a mid-tier strength from the outset, ramps things even further. Having the two games together in the one package, along with the massive wealth of additional side-stories via all the included DLC (including the relatively new Siege of Dragonspear, developed by the team that ported the games to modern platforms and consoles in Beamdog) is a massive deal, but it’s not about the content. It’s about the very meaningful existence of all of it. So many modern RPGs set players on inane fetch quests exclusively for the sake of giving them something to do. Baldur’s Gate and its sequel, all those years ago, feature nothing of the sort. If the content didn’t contribute to the world building, characterisation, or comic relief scattered across the adventure, it never made its way into the game.

Today, a lot of what is done in Baldur’s Gate and its sequel would be considered a ridiculous thing for a developer to attempt. It costs so much to create content that if a player isn’t going to experience it, it’s almost like a wasted effort. Without the meaningless side quests thrown in to maximise the play time, the developers can’t rely on players throwing money at microtransactions just to speed the grind up. Baldur’s Gate can be very, very difficult. Mostly because it’s so open then it’s entirely possible to accidentally walk into a den if hideously powerful enemies with nothing but a couple of minor cantrips to throw at them. But what Baldur’s Gate and its sequel are not is artificially difficult in a bid to achieve a rate of escalation that all-but demands players invest additional money to speed the path to the end. 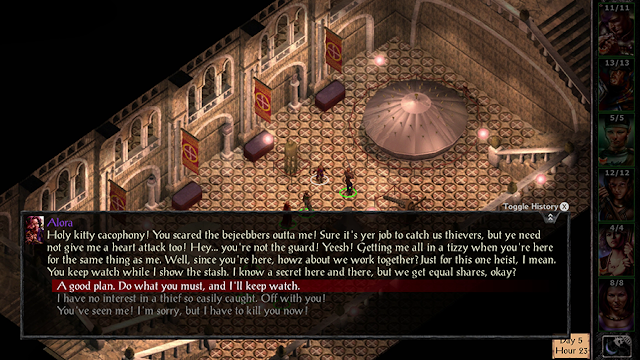 And that’s perhaps the greatest point of difference between Baldur’s Gate and many other modern RPGs. Even BioWare’s own recent work (Mass Effect: Andromeda and Anthem) are cynical efforts to provide players with content because content means time played, which places players in that sales funnel where microtransactions and DLC become live opportunities. So many modern games are products, highly tuned towards making money, but with little consideration for how they do that (other than the vague intent on tapping into whatever has already proven to be popular). Baldur’s Gate comes from a time where video games were created as works of art, and then developers competed to create the best art, as a way of translating it into sales. It’s a quaint, old-fashioned idea, but where I might play one or two games that have been released this year more than once, here I am on my 7th, 8th, 9th, or further replay of Baldur’s Gate. It’s that good I’ve lost count.

For a first run at a console edition, Baldur’s Gate works remarkably well when you’ve got direct control over your characters, rather than directing them around through a mouse-and-keyboard interface. Baldur’s Gate isn’t an action game – you can pause at any time to issue new commands to characters (and you will need to do that to have any hope of getting through the game), so the slightly slow speed of the cursor when issuing commands isn’t an issue. Nor is the slightly clumsy way you need to scroll through an entire hotbar every time you want to cast a spell or use an ability. The interface isn’t perfect, but this game was never designed for a controller, and the developers have done a stand-up job making the game as playable as it is despite that.

One final thing that needs to be mentioned – Baldur’s Gate comes from the 2nd Edition of Dungeons & Dragons, and that means that it uses a ruleset that is… esoteric, to put it nicely. THAC0 was a favoruite term of mine as a kid, growing up, because Dungeons & Dragons 2nd Edition was my major hobby, and I loved counting armour ratings backwards because the better the armour the lower the number. It was very nerdy, and I hated the other PC RPGs at the time that, more wisely, figured that making numbers go up as things got better was a far more accessible way of representing the quality of equipment and combat abilities. With that being said, Baldur’s Gate on console has a massive range of difficulty options, including one where your characters cannot die, so if you are coming purely for the story and characters, you’re not going to have to figure this stuff out if you don’t want to. 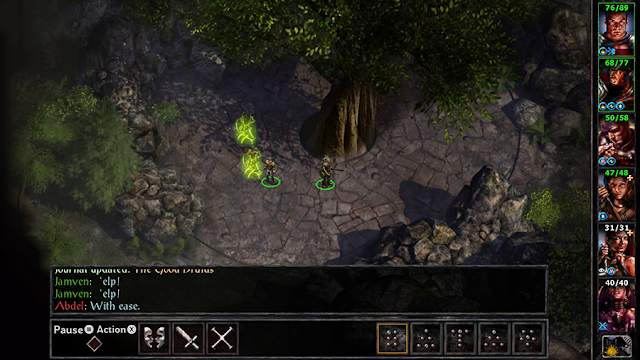 Baldur’s Gate is a classic and a masterpiece, and its sequel might just be better (depending on who you speak to). Brought together in a comprehensive and complete package, not only do you get hundreds of hours of some of the best RPG action ever conceived, but if you’re like me and more comfortable with controllers than keyboards and mice, you’re finally able to play this masterpiece in the way that you prefer. There’s no other way to say this: by virtue of being two of the greatest games of all time, this combined edition pack is one of the best releases of the year.