There’s a new trailer available for the next Miku title!

Sure, it’s in Japanese (and the auto-translate isn’t terrible good) but I think I’ve got the gist of what the trailer says. First, take a look at the new trailer for Hatsune Miku: Project Diva MegaMix:

The trailer introduces the two ways to play the game, Arcade Mode and Mix Mode. Arcade Mode will be familiar to Miku lovers and plays like Project Diva Arcade Future Tone. Mix Mode is new, and built specifically for the Joy-Con controllers (which means your functionality might suffer on the Nintendo Switch Light). Sega has also updated the game’s website to include a list of 91 of the 101 songs included in the game; five of those ten have been announced, but the other five remain a mystery. You can view the list here. http://miku.sega.jp/mega39s/song/

In other Miku news, Sega will be hosting an presentation for Project Sekai, the Hatsune Miku smartphone game announced earlier this year, on October 23 at 20:00 JST. It will share the first information on the game’s world, music, systems, and future developments.

Root Letter’s sequel has been announced!

That’s two exclamation marks in a row for my headers, I must be excited by today’s news more than usual. And with good reason, as Kadokawa Games has announced Root Letter’s sequel, Root Film. It will launch this spring in Japan on the Nintendo Switch and PlayStation 4. Here’s an announcement trailer:

Root Film will have two protagonists, Rintarou Yagumo and Riho. Yagumo is involved in a new TV project, a mystery drama set in Shimane that will also serve as tourism promotion. The pilot was shot ten years ago, and plans for the revival are now in place. The project is a competition between three filmmakers, each using a different actress as the protagonist.

During its burst of announcements (see above), Kadokawa Games revealed LoveR Kiss for Nintendo Switch and PlayStation 4, launching in Japan this winter.

LoveR Kiss is an upgraded version of the March 2019 PS4 release of LoveR. It adds a new romantic interest in teacher Himari Saiki, and new Photo Session Elements. The R in LoveR does stand for romance and record, after all.

Nintendo Switch users will be treated to a new Photo Sessions experience, as you can tilt the hardware as though you’re using an actual camera. PS4 users, tilting the controller will change the shooting angle and you can request poses via voice input.

Have a Japanese account on your iOS and Android phone? This one’s for you! Aquaplus has released three visual novel-only versions of Utawarerumono for iOS and Android devices, all free of charge and uncut. This means the RPG elements are missing, but the full story is there. 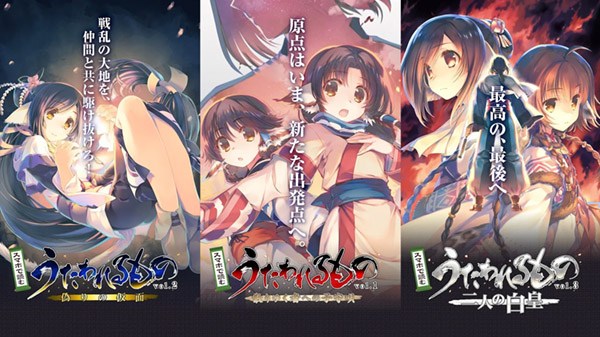 We reviewed Utawarerumono: Mask of Deception; Matt gave it a whopping 4.5 stars. In his review, he explicitly states that the combat (missing in these mobile versions) is entirely there to support the narrative, not nice versa.