The relationship Felix The Reaper has with music and with dance is the kind of feeling you get at a wedding (that is not your own). That bubbly free flowing love music that permeates the entire music selection. However it also feels like it comes from closer to the end of the night, as the enthusiasm for the music has died down a bit, and you’re alone drinking a bottle of scotch with everyone doing their own thing (you paint a vivid picture of how you handle weddings, Trent – Ed). then all of a sudden you see from the corner of your eye someone perfect, someone majestic, and you get up and dance with them creating this lovely, if not entirely sober moment. That is what Felix The Reaper is really all about, the interstellar feeling of the first burst of love after been so low and in the dumps.

The plot follows the adventures of our titular Felix fixating on Betty, the Maiden from the Ministry of Life. This is a deliciously scandalous forbidden fruit relationship that his supervisor warns against, as you Felix works for the other ministry, the one for death and soul reaping. Pitted as a romantic comedy about life and death, Felix The Reaper certainly fits the brief with its butter-like assassin that dances the lives away to be closer to his romantic interest.

The music selection is a sombre selection of instrumental pieces that don’t heavily draw you in but are distinctive. It fits a game that has the theme of dance. Felix dances majestically through levels with contemporary dance moves. Instead of walking the few feet you asked him to, as you would expect from the 99 per cent of normal games out there, Felix instead twirls around, sticks out his toe, and glides to the spot (after perhaps even doing a cartwheel). 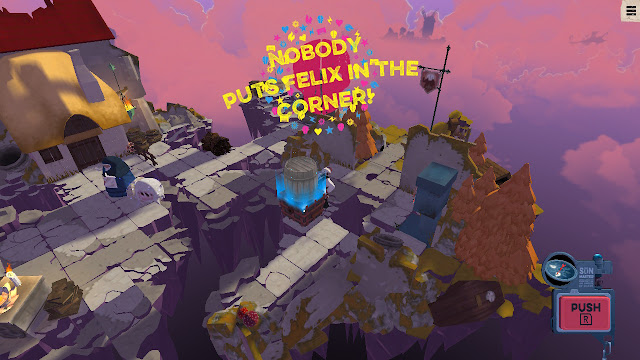 The effect is like what you’d imagine an after-hours cleaner at a convenience store does once they slip on some head phones and start singing loudly to their favourite music while dancing with their broom. It leaves a unique emotion in the player as they complete levels. Especially when it leads to the horrible death of the characters Felix interacts with. It’s a great juxtaposition in tone, really. Levels are introed and exited with comedic animated shorts that reveal continued drama and outcomes caused by Felix. It is this tone that sets the game apart from other similar puzzle games and really draws players into the world created by the developers.

Felix is filled with symbolism around death, but never takes itself too seriously (the very definition of dark humour). Characters include an over-praying nun, goats and other such Christian symbolism is used for both comedic and emotional effect. However, one area where Felix deviates from the Christian ideas of death is that here, in this game reapers behave like vampires, and the gameplay is built around the idea that our “hero” can’t enter the sun.

As all of the levels are set during the daytime, players need to make use of objects that cast shadows on the world through which Felix can move. The sun’s direction can also be moved to face two different directions (Felix must be a patient boy, waiting for the morning to become evening?) which adds an extra challenge and depth to how Felix can navigate the world. 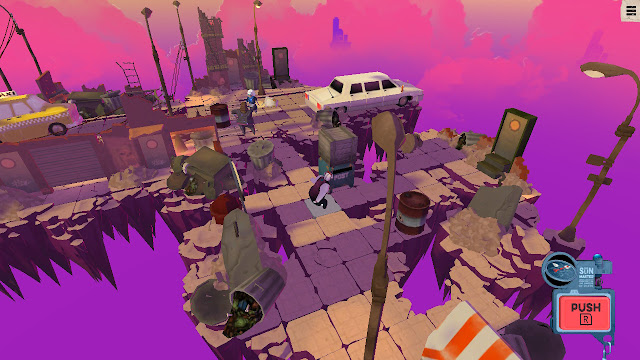 The game features a number of assists to the puzzling, which allow the player to roll back to a previous checkpoint or see the goal at hand. Missions can be simplified to moving one object from part of the map to an end point which results in a comedic death or gruesome outcome. However sometimes the direction you need to take may not be obvious, so the game includes a button which allows the player to show the next step. This seems useful at first though, however at times when I got generally stuck in a level, I found it to have varying degrees of usefulness. As it only shows what the next checkpoint goal would be, it can still not reveal the outcome straight away.

There’s a big difficulty spike to be aware of, too. I found most of the wilderness and medieval sections to be fairly comfortable, and it was relatively easy to hit the metaphoric beats to get to the end task. However, the sections set in the 80’s seemed randomly harder, and a sudden unexpected change to difficulty that left me going from levels which took minutes to complete to levels which where frustrating and draining.

That being said, the way that Felix the Reaper is packaged together, and the light-hearted nature of it all, does drag you back in. It’s charming nonsense, and with plenty of additional options to replay levels to challenge yourself further, it won’t be a game you’re done with in a hurry either, once it has its hooks into you.