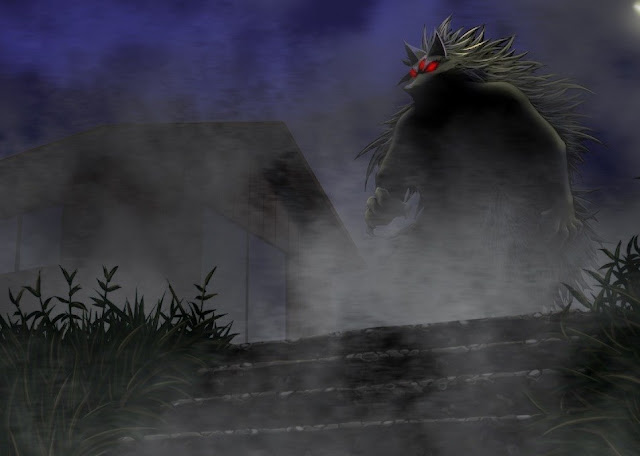 Raging Loop is a fascinating little game. It’s cheaply made, and its very limited production values do prevent the game from ever getting the dark horror atmosphere that the narrative deserves, but after an adjustment period you’ll put all that to the side, because what matters is the story that it weaves, and this very, very Japanese werewolf tale is fascinating.

Raging Loop’s about a boy with a motorcycle, driving without aim because his girlfriend split up with him, and now he’s got nothing better to do with his time. It’s just as well he’s not going about his holiday with an itinerary though, because he accidentally crashes his bike and ends up in a creepy little village deep in the mountains, way off any map of the area. But it’s okay! There is one blisteringly sexy girl at this village, and after getting very drunk with her that evening, he has become smitten with her, which if you ask me is better outcome than any carefully planned trip. Gotta roll with the punches and all that.

The only problem is that everyone else in the village, other than this girl, absolutely hates the guy and wants him gone as soon as possible, and the reason for that less-than-subtle xenophobia is simple; outsiders seem to bring on a curse that turns one of the villagers into a werewolf, and kicks off a convoluted death game that makes Monokuma’s antics in Danganronpa seem pedestrian. 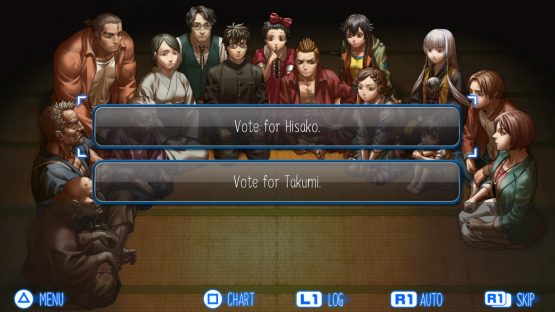 Okay, let’s take a deep breath and see if we can explain the rules here. The werewolf (or werewolves – there can be up to three) conceal themselves as one of the humans that they’ve killed during the day, and so during the night, for security, all people need to lock themselves up in individual rooms. Each night the werewolf is going to kill one person (which is better than the slaughter that would occur if everyone huddled together), and each day the remaining villagers need to get together to execute one of their own, hoping that they guess right and get the werewolf.

To even the odds just a little, the humans do have a couple of powers bestowed on them by guardian spirits. Each day, the person charmed by the “snake” can determine if one (and only one) other person is a wolf. Two people are given the gift of the monkey, and can immediately know who the monkey is (therefore knowing that each other are not wolves). The crow can determine if a dead person is a wolf (useful for reasons that will be made clear in a second), and the spider can “protect” one person, meaning that the wolves cannot attack that person for one day.

The villagers then need to work together to decide who among them is most likely to be a wolf. They’ll hang that person, and then the crow comes in to determine if the group voted correctly or not. They then do this day after day until either they win (all wolves dead), or the wolves win (all humans dead). This is the game that our biker dude gets himself trapped in, all for the affections of a (really, really beautiful) girl that may or may not actually be a wolf looking to snack on the guy. 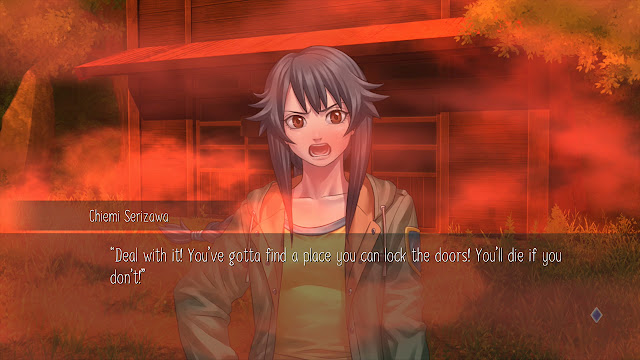 Phew! It’s convoluted, and in all honesty, for a horror game, the ridiculously labyrinthine set of rules that everyone is playing to disqualifies it from being something particularly scary. Fear comes from a primal place, and even if the rest of the game is otherwise quite intelligent, for something to really work as horror there needs to be moments where the raw fear is allowed to take over and the audience’s flight responses to kick in. It’s something the brilliant Death Mark and NG do so well – blend complex and deep storytelling and themes with those moments where you just want to drop the console and step away. Raging Loop isn’t like that. Raging Loop exists purely in the head.

Now, in saying that it doesn’t work particularly well as horror, I do need to clarify that Raging Loop is a brilliant bit of philosophical discourse. There’s the obvious use of game theory and, particularly, the prisoner’s dilemma – an economic principle that tells us how people will tend to act and interact with one another when there are conflicting interests and the tension between what the right thing to do as far as the group is concerned, and what the benefit to the self might be. It’s basically the mathematical formula that shows how people rationalise selfishness, and opens up the kinds of hypotheticals and mind puzzles that plenty of game developers have already toyed with.

It’s also a truly fascinating attempt to bring the werewolf legend into Japanese ghost stories. For those who don’t know, Japan doesn’t really have a werewolf tradition. It’s got foxes that turn into people to trick them, and a million or so different yokai stories to describe spirits being everything from playful to murderous, but the werewolf comes from European legends. To just drop one into a game about a remote Japanese village would not have been questioned by many (because those aren’t the kinds of questions most ask about the games they play), but it also would have been odd enough at a functional level to dismiss as a bit of nonsense. 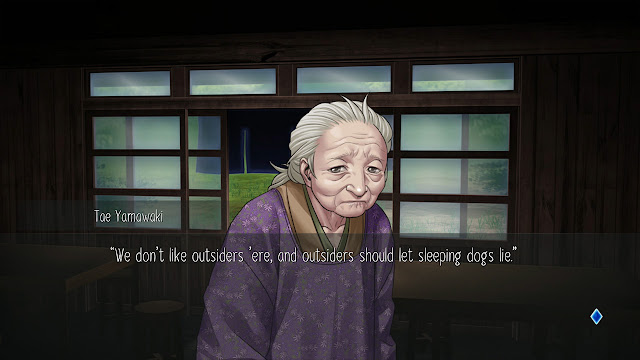 Instead, the writer of Raging Loop went to astounding lengths to build a mythology around the werewolf and explain it using Shinto thought and spiritual perspective. The explanation is lengthy – as a quick side note Raging Loop takes forever to get anywhere in its storytelling – but through it we get a unique sense of how Japanese spiritual storytelling is structured and constructed, as though we’re watching a Shinto story being built, piece by piece, right in front of us. This stuff can’t have been easy to localise (and kudos to PQube for achieving it), but the end result is a look into a side of Japanese culture that remains a bit of a mystery to even those of us that spend a fair amount of time living and working over there.

Raging Loop’s storytelling is as labyrinthine as its narrative. As you play, and make decisions, you’ll earn numbered keys, which you can use to unlock specific branches and decision options that were previously presented to you. So, to give you the first one as an easy example – there hero is presented with two decisions, only one is currently locked by a key. He selects the only option currently available to him, and promptly dies, but in doing so gets the key. From the restart, players can jump on over to the branching path, use the key to unlock the other decision, and then continue down a path in the narrative where the protagonist doesn’t die.

This is a useful technique by the developer in making sure you get multiple different perspectives on the narrative of Raging Loop, because to understand what’s going on in full, it’s important to go down some of those “bad” pathways, without feeling like doing so is going to force a restart right from the beginning (or having to game the save system). 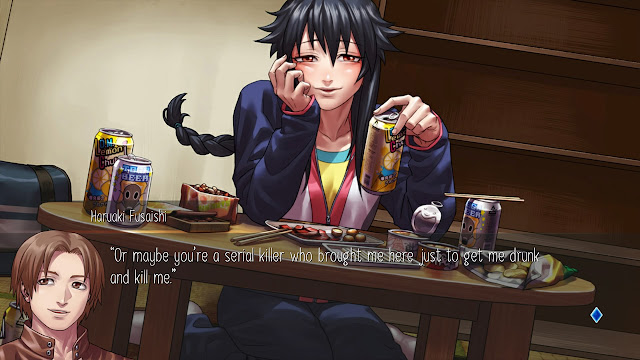 Really, Raging Loop’s only issue is its presentation values. Voice samples are compressed and tinny, character models don’t do a whole lot of movement and animation, and there aren’t that many key scenes CGs for a game of this length. There is a lot of time spent staring at character models that barely blink and don’t have the most dynamic of poses. The visual novel space is incredibly competitive these days, and Raging Loop doesn’t do its excellent storytelling any favours through its limited presentation.

I can’t recommend this game enough. It tells a cracking Shinto werewolf story, and the drama of the game’s “courtroom” scenes are every bit as compelling as we’ve seen in the likes of Danganronpa and Lost Dimension. The presentation is a little on the pedestrian side, but don’t let that put you off exploring one of the hidden gems of the genre.