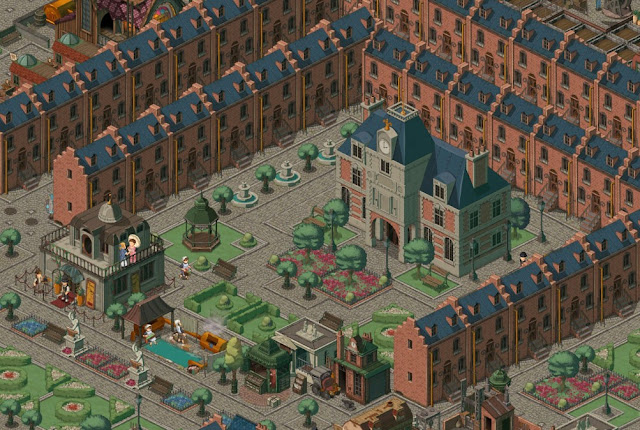 City builders – or similarly-themed “builder” simulators – are a favourite genre of mine, but only when a developer gets them right. Entries into this genre feature a great deal of number crunching, and require that players have a good nose for design, balancing, statistics, and so on. When it’s done well, it’s also a highly creative and engaging visualisation of what amounts to real-world planning and design processes. When it’s not executed poorly, however, it’s about as enjoyable as a spreadsheet. Sadly, Lethis is the latter.

Related reading: The Cities: Skylines port on Nintendo Switch is disappointing, but Project Highrise on the console is brilliant. Our review.

The premise is great. Lethis promises us a steampunk-powered city builder, and on paper that’s a brilliant idea. Steampunk is a genre that mixes a fantastic, exotic kind of technology (steam machines) with the punk – an inherent criticism of the establishment, and of capitalism. As such, while it generally takes place in either alternative universes or fantasy worlds (given that steam technology of this kind has never existed in the real world), there are strong moral analogies to what’s going on in the real world – now or through history. As a city builder, steampunk could be used to question how we build cities, the kind of economic models that hold them together (to the disadvantage of many), and how those cities are exploited for the benefit of the few as a “resource.”

Steampunk should never be reduced to an aesthetic, however. It’s not about steam machines because steam machines are “cool.” You just need to look at the list of authors credited with forming the steampunk canon in Wikipedia: H. G. Wells, Jules Verne, Philip Pullman, Scott Westerfeld, Stephen Hunt, and China Miéville. These people never used steampunk as an aesthetic. It was there to serve a specific point, and make a specific commentary about the world. Too many modern artists – particularly in video games – overlook this, turning steampunk into a shallow, vapid exhibition of the coolest steam machines they can come up with. 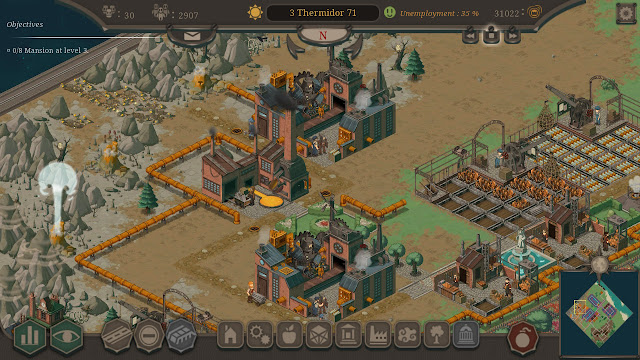 Lethis uses steampunk as an aesthetic. In fact, the game is the polar opposite of the -punk in steampunk. Everything you do in the game drives towards the goal of eventually being able to build expensive, elaborate manors for the aristocratic class to live in. These wealthy individuals refuse to live among the rabble, have to have exquisitely expensive retail outlets and coffee shops service them (exclusively), and rather than hire the dirty people from outside to manage those shops, all of these outlets need to have automatons in their “employ”. It would be one thing if the game was satirical of the aristocratic class that it depicts, but no, that’s not the case. Rather, you benefit from the “jobs” that that class supplies in making breads, jewelry, and automatons to serve their pleasure, and the money they bring in. These buildings and this class of people are aspirational, and the epitome of your city… and that is closer to a celebration of neoconservative capitalism than any steampunk author I’ve ever read.

Lethis’ narrative – told largely through the introduction to each chapter – tries to be lighthearted and fun, but doesn’t try whatsoever to be subversive. Fair enough that you don’t come to a city builder for the narrative, but again, this one promised steampunk, but other than a couple of buildings being steampunk-ish in design, there’s little indication of that in action. Some of my favourite -builders have very specific themes – Aven Colony’s spacefaring colonisation theme, for example, or the satirical tropical paradises of Tropico, but what I love about these games is that they all do more than look somewhat different to Sim City. They also play differently with mechanics that reflect the design, and challenge players to think about things in different ways. Lethis doesn’t do any of that, making it a complete misfire and waste of its promised theme.

Actually playing Lethis is so bland, too. It’s cut from a similar mould to Ubisoft’s Anno series, in that you need to focus on building up clusters of residential buildings, and then making sure that each building has access to resources in order to grow. At first a water well is sufficient, but as the houses get bigger the population will start demanding shops, and then theatres, washing facilities, and so on and so forth. You’ll need to place plenty of these supplemental buildings around, as the range of each individual one is small, and before you know it you’re playing with a giant puzzle box as you try to squeeze every service in so that every building has access to them all. 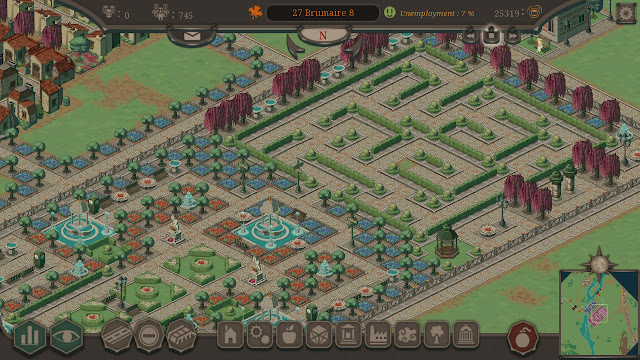 Add in the need to have farms and mines away from population centres, too, and the fact that all of these buildings require their own employees, and you arrive at the single most important statistic in all of Lethis; the unemployment rate. If you don’t have enough people, then some of your buildings go unused and therefore will not contributing to the city. If you have too many people, your city will struggle to be happy enough to grow. That won’t happen often, though. The real problem is having a lack of people. Every time you need to build more houses, you also need to extend the wide number of services available to them, so actually reducing the skills shortage often requires that you build vast new suburbs for your people, with all kinds of support buildings that employ most of the new citizens. The sprawl in Lethis gets really bad, and you need to keep building so many of the same buildings over and over again, to slowly chip away at that overall “workers needed” count.

Another major issue with the game is how quickly populations can shrink. Entire suburbs can be “demoted” from level 5 (or greater) buildings back down to level 2 (or lower) if food shortages should ever hit. With food being delivered haphazardly (as most of it comes from farms), this is not an uncommon occurrence on the months that farms are not producing. Creating excess farms doesn’t help (since you’ll need to build additional suburbs to give them employees, and additional warehouses to hold all the excess food during the “on” months), and the moment that an area’s buildings do start to get demoted, the population goes with them, ruining any population balance you had, and therefore leaving buildings with no employees. Without the services of those buildings, people start to flee from other suburbs as well. Actually keeping the city supplied is irritating and endless busywork, as you need to track so many statistics, and have such a short time to resolve problems before the exodus begins.

As a final issue, buildings can collapse if they’re not properly maintained (i.e. you built them slightly outside of the range of your support buildings). When then happens a message helpfully pops up telling you that a building has collapsed, but not showing you where. You’ll need to scour the entire map like it’s a Where’s Wally game looking for the bits of rubble, and that can be hard, as the rubble tends to blend into the background. Once you do finally find it, you need to clear it before rebuilding whatever was there (and a maintenance structure to look after it this time), but then you’ll realise that you have no idea what building was there before, as the game won’t tell you. When your town is small, that’s not really an issue, but in the later stages, good luck remembering the location of every single building in your environment. 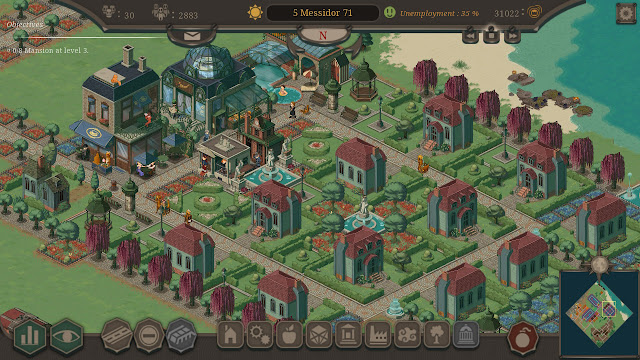 Lethis only has two ways to play – the campaign, and sandbox mode, which is just the campaign without the win objective in the end. If either of these modes were engaging enough, that would be all Lethis needed (I spend my entire time in Cities: Skylines playing sandboxes, for example), but here neither mode is sufficient, and while each of the campaign missions are lengthy enough affairs, there’s still not enough meat to this game’s bones. Especially when there are so few building types, and the nature of the game is such that you’re largely stuck into constructing your cities in one specific way.

Lethis had potential. The idea of a steampunk city builder is appealing and does delight the imagination on premise alone. In execution, though, there’s virtually nothing of the steampunk concept, beyond the aesthetics, and the game is so stiflingly limited in how it plays that it becomes dull before measure far, far too soon.