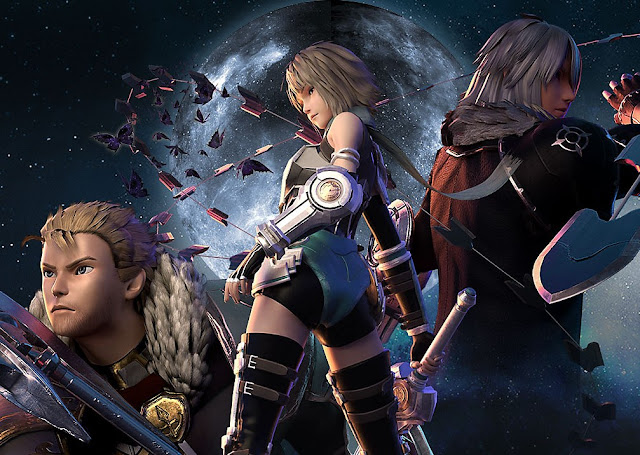 AeternoBlade II is much better than its predecessor, and that’s not a small thing to say. The original AeternoBlade had its heart in the right place, and, coming from a development team out of Thailand, it was something that you really wanted to root for. Unfortunately, it was also a clumsy, clunky mess to play. This new one isn’t game of the year material by any means, but it’s also genuinely good fun.

Related reading: My review of the original AeternoBlade

In so many ways AeternoBlade II wants to be seen as a Castlevania-like experience. It shares a similar fascination with the European gothic, and offers a similar fast, fluid combat system, combined with plenty of platforming and exploration. One of the characters even has a whip-like weapon. AeternoBlade II has one real trick up its sleeve though; the idea of time manipulation. You’ll constantly be called on to manipulate time, be that to slow it down, rewind it, accelerate it, or stop it completely. In this regard there’s also some thematic similarities with a far more obscure action title, Blades of Time.

You’ll need to use these abilities for the platforming. For example, making a clone of yourself to hit a switch that opens a far away door at just the right moment to let the “real” character though. Additionally, time manipulation comes into the combat, as efficiently defeating many enemies – particularly the bosses – relies on finding a specific weakness that they have to one time ability or another.

It really does have slick B-Castlevania vibes going for it though. Quite enjoyable. #NintendoSwitch pic.twitter.com/BlXqt0EMmT

The original AeternoBlade did much of this too, but AeternoBlade II is much smoother in execution, particularly with regards to the combat. The flows of attacks, dodges, counters and time abilities feels really engaging this time around, and against the hordes of enemies in particular, it can be really satisfying to carve through them with impunity. Bosses have a touch too much health and, thanks to their limited attack patterns, become a bit of a grind, but again, in AeternoBlade II, you at least feel like you’re in control of the play.

The only thing that lets AeternoBlade II’s combat down is when the developers decide to shift the action from 2D platforming to a 3D arena, at which point the action more closely resembles a Devil May Cry, God of War, or Bayonetta. Or, at least, that’s what the developer was aiming for. Unfortunately programming combat in three dimensions is significantly more complex than 2D battling, and the developers almost lose control of their work every time it happens in AeternoBlade II. It’s still playable – just – but it’s messy, the camera is a pain to deal with if there’s more than one enemy on the screen at once, and it’s so superficial. Other than the developers trying to flex some muscle to show that they can do 3D now, too, there’s nothing that these transitions actually add to the game. The combat plays out the same way, there’s no interesting use of space by the enemies (in fact, their lack of AI is even more pronounced in 3D), and attacks or special abilities don’t behave differently in that extra dimension.

Thankfully those 3D combat moments are the exception. For the most part AeternoBlade is happy being a 2D effort at a Metroidvania. It’s also absolutely hilarious, and while I suspect that most people will find a lot of what goes on in this game hopelessly amateur, I think it comes together with a certain B-grade panache that is delightfully twee.

Aeternoblade 2 has the most amazingly B-grade voice acting #NintendoSwitch pic.twitter.com/vhjkmowCjT

Take the voice acting, for example. It’s absolutely, incredibly dreadful. It’s like every actor is channeling Criswell from Plan 9 From Outer Space, and given how limp the narrative is, I can only say that this is absolutely the right way for everyone to go. We’re talking about genuine, bona fide “it’s so bad it’s actually good” territory here, and it’s surprisingly rare for a game to commit that far. Even those titles that channel B-grade stuff like Plan 9 From Outer Space (Earth Defense Force, for example), do so as a tongue-in-cheek routine, played for humour. AeternoBlade II has a poor narrative, everyone involved in making it surely knew that, and by golly do they commit to that. As a result it is, ironically, one of the best things I’ve played all year in terms of pure entertainment.

Nothing about AeternoBlade II comes across as particularly offensive, either. The narrative’s not great, but it’s easy to follow along with. The music’s forgettable, but never hurts the ears. The three playable characters aren’t memorable, but they’re different enough from one to the other to help maintain the flow and vibrancy of the action. Perhaps most importantly, AeternoBlade II doesn’t outlive its welcome. I have no idea how long I actually sat down to play this in total, but it between a couple of other games, it was over in a couple of days. Any longer – if AeternoBlade II had actually started to drag – it would have been catastrophic to the game’s strength as a simple bit of nonsense joy.

I genuinely enjoyed this game. It’s no Bloodstained, but it plays really nicely, and offers up the kind of B-tier delights that we just don’t see much of any more. I know that much of my review will sound like a list of backhanded compliments, but when you consider that the team most certainly wasn’t out there to create an artistic masterpiece, the fact that I found this so purely entertaining is surely what they wanted. You’ve got to be the kind of person that gets a kick out of genuine B-grade nonsense to enjoy AeternoBlade II, but if that’s you, you’re going to have a cracking time with it.