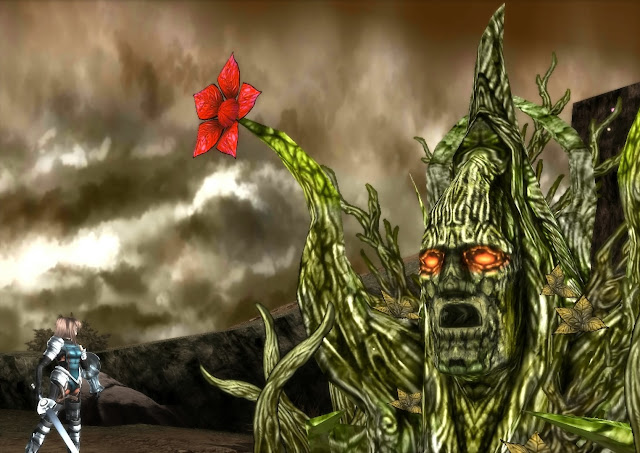 I really wanted to like AeternoBlade. It’s the kind of game that I want to champion, because it comes from a young development team (Corecell Technologies) from a young game development market (Thailand). And because of that it represents a diversifying game development industry, where creative people from all over the world are able to build games and thus bring something of their culture to the rest of the world.

I wanted to like AeternoBlade like I love films like Ong Bak, in other words. We don’t see enough of Thailand in our popular arts in the rest of the world, and I was really looking forward to this game for this reason. I was disappointed that I had to wait for the PlayStation 4 release, because the game has never officially been released in Australia and so I’ve needed to take advantage of the PlayStation 4 being a region-free console, but I was glad that I finally got to play it.
Sadly, and it breaks my heart as a critic to write this: AeternoBlade is not a good game. Without being broken it is clearly a game that was produced on a budget, and while it might have gotten away with this on a handheld or mobile device, on the big screen, on a PlayStation 4, it simply struggles to stand out against the almost frighteningly good depth of indie experiences that the console offers elsewhere. 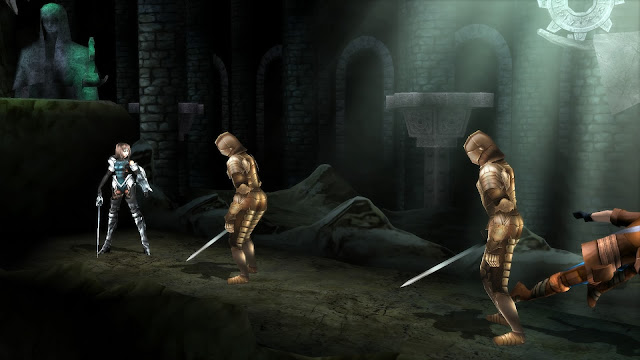 At its core, AeternoBlade wants to be a classical 2D Castlevania game. All the mechanical elements are there – the dark, gothic-styled setting, the RPG-infused platformer combat, and the need to backtrack in order to fully explore areas, earn power-ups, and become more effective in combat.

Then there are periodic bosses to contend with that fill the entire screen, and AeternoBlade even tries to throw some unique features in for good measure. Key among these is a control over time itself. Early on players acquire the ability to rewind time, which then allows them to reverse things that have happened (such as the movement of platforms, or the attack patterns of enemies), even as the player’s lead character isn’t affected by the time rewind.
Making us of this ability is key in both figuring out the game’s puzzles (which typically involve using time to move platforms into accessible spaces), and the more challenging enemies (by rewinding time to avoid their most powerful attacks). This ability is limited by the supply of magic points, but that supply is plentiful and recharges over time, and I never really experienced a moment where I was left struggling without access to the rewind ability. 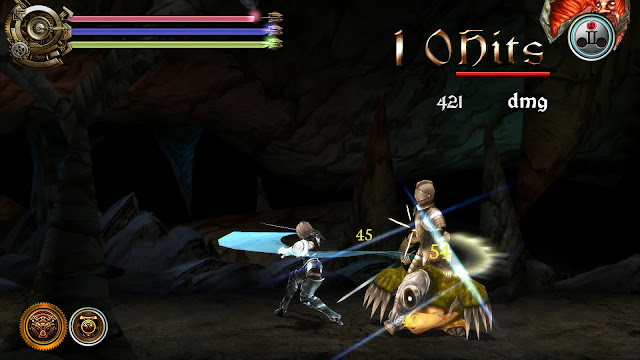 Unfortunately the rewind ability is never used in a particularly interesting manner. Boss battles become far too predictable when the rewind ability allows you to reset patterns to a point where they are vulnerable to easy attacks. Puzzles are not nearly complex enough to take advantage of how fundamentally cool the mechanic is. It’s a brave idea for an indie developer to turn time into a mechanic, but AeternoBlade sadly acts as a case study for how difficult time is as a central mechanic, because here it makes things easier without necessarily making them more interesting. And, while it’s okay for a mechanic to make a game easier than it would have been otherwise, it has to be interesting for it to be effective. For a point of comparison, Life is Strange also features time travel, and while it’s never used in a complex manner, it is so incredibly interesting – and ingrained as part of the narrative – that it is easy to enjoy that game for what it is.
The narrative itself of AeternoBlade is part of the problem. What we have with this game is a fairly standard revenge plot, mixed in with an all-powerful end boss as a target, and very threadbare characterisation backing that narrative up. As I sit here writing this, I can’t remember the name of any of the major characters. I say that not to be flippant, but to simply state that there is nothing about these characters that stands out beyond “generic hero” and “generic villain” stuff. Given that the protagonist is a female makes all this all the more disappointing, as the development team clearly thought about the narrative (to create a scenario beyond the generic male hero), and then struggled to do something meaningful with it.
And I’d be lying to myself if I didn’t admit that the visual presentation of AeternoBlade lets down greatly to me. Characters, special effects, and environments are all that kind of blocky aesthetic that we would have been comfortable with back on the Nintendo 64 or PlayStation One, but are harder to justify now. While the world is clearly gunning for a similar kind of melancholia that marks the Souls brand of gothic, it strays far too often on the side of bland, muted, and generic for its own good. Level design is also incredibly arbitrary and, now that the games industry has evolved to the point that we expect level design to make some kind of sense, the artificial placement of platforms, switches and enemies no longer cuts the muster. 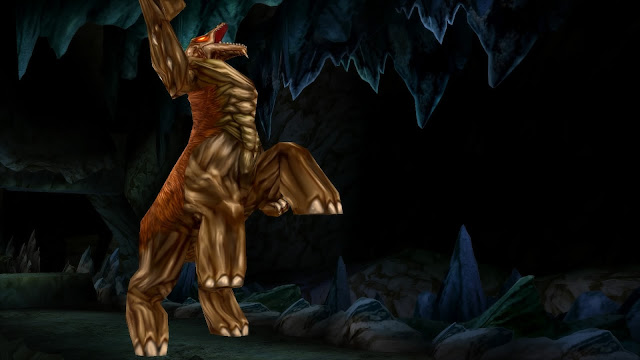 Related reading: For a second take on the game, you can also check out Jim’s review of the Nintendo 3DS version.

I can totally appreciate that AeternoBlade comes from a country with limited game development infrastructure, and from a small team at that. I think there’s a seed of inspiration within the game that, given experience and a larger budget, gives it real potential. Unfortunately, as it stands, AeternoBlade is simply not competitive either on a technical or artistic level, and that is a real shame.

Mobile gamers rejoice, as Final Fantasy VII is available in the App Store!