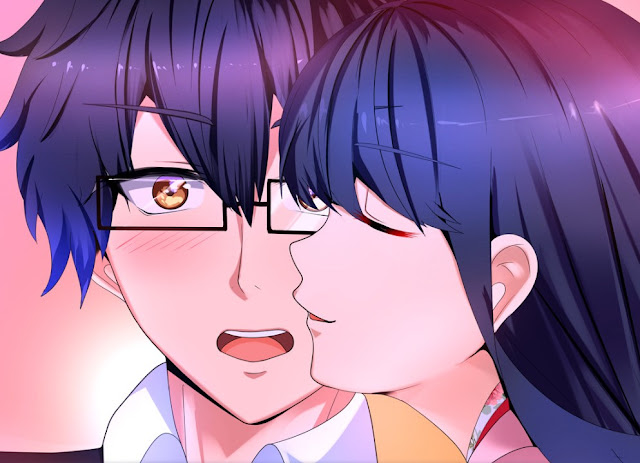 As far as coding is concerned, visual novels are the easiest things to make. This is particularly true if you’re making ones that either don’t include gameplay elements, or only throw the occasional choice and branching path at the player. I should know; even I’ve been able to make a VN, and I have absolutely no coding skills whatsoever. A Winter’s Dream would not have happened if visual novels weren’t so easy to make, I suspect. That’s not a criticism of it, though, because the difficulty in writing a truly great visual novel is just that – the writing. This one is actually quite the pleasure to read through, and so it most certainly qualifies as a success within its genre.

A Winter’s Daydream stars Yuu, a young man who has recently moved from the boondocks to live and study in Tokyo. Deciding to be a good son, he returns home for the New Year’s celebrations (New Year’s being a major family event in Japanese culture). Unfortunately Yuu does not have a good relationship with his sister, who lays into him with such hostility on arrival that a day later he’s on the train again, this time heading even further into rural Japan to visit his grandmother.

So far it all sounds quite straightforward, right? It’s a little weird that the reason Yuu’s sister is mad at him is because he didn’t buy her a bikini as a gift (not that I have a sister, but if I did, I can’t imagine I’d be buying her swimwear either). That being said, I’ve played enough VNs and Japanese anime games to just accept that sometimes cartoon characters buy sexy things for their cartoon siblings. 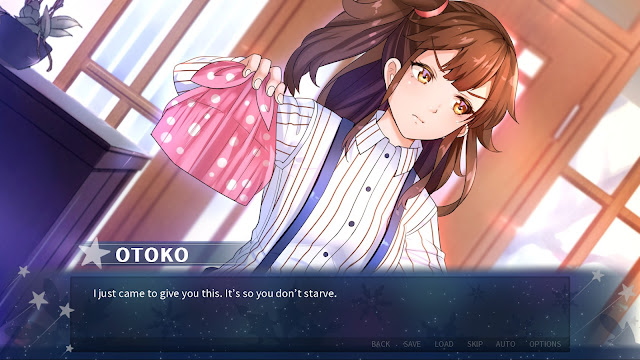 No, it gets weird after Yuu spends the evening watching TV with his grandmother, only for a snowstorm to put the TV out. Yuu heads to bed and wakes up the next morning and discovers that his grandmother has been transformed into one gorgeous 19-year-old girl. Yes. That is something rather unusual even by anime and visual novel standards. The game never goes to creepy places with this, to my great relief. Rather, it becomes the premise for a rather lovely bit of writing and characterisation. One that dwells on a combination of the personal (life, regrets, love and family), while mixing it up with plenty of thought about Japan itself (nostalgia, the decline of regional Japan, the Japanese identity).

Make no mistake, it’s the writing that will keep you hooked on A Winter’s Daydream. It’s a visual novel that has clearly been made on an extreme budget, with an absolute minimum of art assets and other presentation elements. It’s also not an overly lengthy story (not that there’s anything wrong with that, given that it is a complete narrative that shares with players everything that it wants to), and there’s not a single decision to make through play. It’s a pure reading experience, which, again, isn’t actually a bad thing, since the story that A Winter’s Daydream tells doesn’t need decisions and multiple endings.

What’s in A Winter’s Daydream is rather lovely, though. The character sprites are all gorgeous, and while Yuu may have not bought his sister a bikini, I sure hope there’s some kind of expanded universe sequel where someone more appropriate than her brother does. The grandmother’s transformation from withered old woman to young girl getting a chance to relive her youth is a delight, too. The visual impression captures the step back in time nostalgia perfectly. 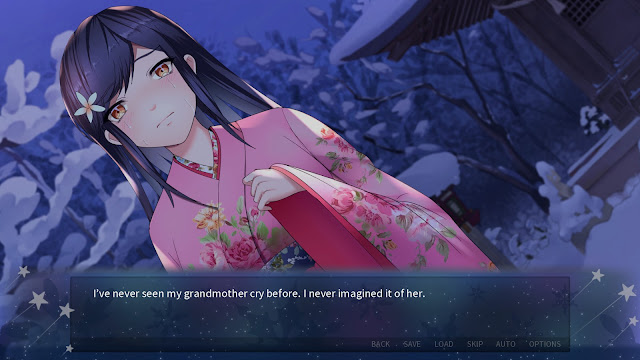 If there is a criticism to level a A Winter’s Daydream is that is relies a little too hard on cheap sentimentality at time. It’s not really a romance, in the traditional sense, but it relies on the same overbearing and emotionally cheap tricks that Hollywood romance films do to carry the emotional impact. A Winter’s Daydream is smart enough in its ideas and execution that it didn’t need to be as over-the-top as it is in places.

The only other issue is mechanical. I know I just said that visual novels are straightforward to code, but there are a couple of elements that are important – a visual novel does need to offer the ability to save anywhere. A Winter’s Daydream relies on an autosave system, and doesn’t actually tell you when it’s saving. I guessed that the saves were happening between major transitions, but I was never quite sure just how much progress I was losing each time I quit out of the game. It would have been nice to have a couple of quality of life features, like the ability to remove the dialogue box so I could enjoy the various moments of key art. If that feature was in the game, a lack of explanation around the controls didn’t make that clear enough.

For a couple of dollars, though, A Winter’s Daydream is the kind of indie visual novel that deserves support. It tells a good, interesting, and original story, with presentation that is inoffensive on every level, and some truly pleasant moments throughout. It’s not a visual novel I’ll ever replay, but I did enjoy every second I had with it.