Sony’s next State of Play set for this week

It seems like it’s been ages since Sony’s last State of Play broadcast, but it’s finally time for a new one! Mark your calendars for September 24 at 4 p.m. EDT / September 25 at 6 a.m. AEDT. 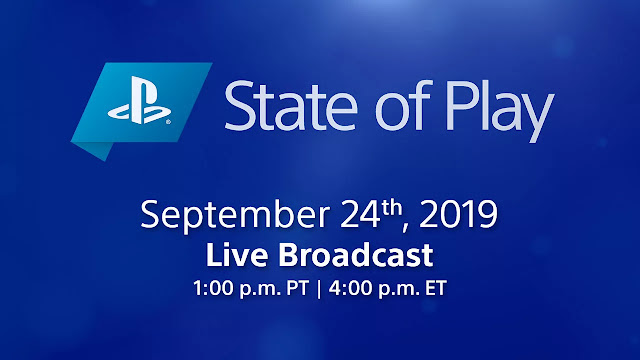 This State of Play should have a new look, and last about 20 minutes. Sony promises to share new game reveals and several other updates, include content from PlayStation’s Worldwide Studios.

Developer Naughty Dog confirmed via Twitter last week that The Last of Us Part II will be showcased during the State of Play broadcast.

Atelier Ryza: Ever Darkness & the Secret Hideout won’t be available in North America or Europe until next month, but it’s set to launch this week in Japan. Publisher Koei Tecmo and developer Gust have released information regarding three upcoming free updates to the title.

The first update will be released on October 10 and include Photo Mode, Lost Lamb No. 2, and Me and My Puni. Photo mode is as it sounds, as gives the player access to tools for time of day, depth of field, poses, and more. Lost Lamb No. 2 is an ancient tool to be attacked by Ryza and company; you acquire gems based on the amount of damage dealt, number of chains, etc. Me and My Puni allows players to raise their very own Puni, who will bring back items when it goes on a journey.

The second update is set vaguely for October, and will include the Advanced Exploration Patch (certain skill upgraded, increased level cap, weapon upgrades expanded) and the High Difficulty Patch (adds a “Legend” difficulty mode). The third update is scheduled for November and will increased the Gathering Synthesis level cap from 99 to 200.

Developed by Bithell Games (yep, the Bithell behind Thomas Was Alone and Volume) and published by Good Shepherd Entertainment, John Wick Hex now has a release date. And to celebrate, a new trailer:

John Wick Hex will be released for PC and Mac as an Epic Games Store exclusive on October 8. A console version is also being developed.

The title is an action-oriented strategy game that puts the player in John Wick’s shoes, having to think and strike like him. It was created with close cooperation with the films’ creative teams. Progressing in the original story will unlock new weapons to change up tactics, as well as new suit options and locations. The game should complement the style of the films through its noir art design.

Visit Troy in the next Total War title

It’s time to visit Ancient Greece in TROY: A Total War Saga, the latest in the popular strategy game series. It will be released for PC, Mac, and Linux sometime next year. Here’s its first trailer:

In Ancient Greece, heroes walk among us. As such, when Paris, Prince of Troy, kidnaps Helen of Sparta, Helen’s husband vows to bring her home at any cost. His brother, King Agamemnon, summons Achaean heroes, including Achilles and Odysseus.

TROY: A Total War Saga is inspired by Homer’s Iliad, a classical written take on the Trojan War. The game promises deep, character-led narrative drama as you play as one of eight heroes. Of course, we can expect a blend of turn-based empire management and real-time battles.

TGS 2019 interview: On managing one of the industry’s oldest strategy properties