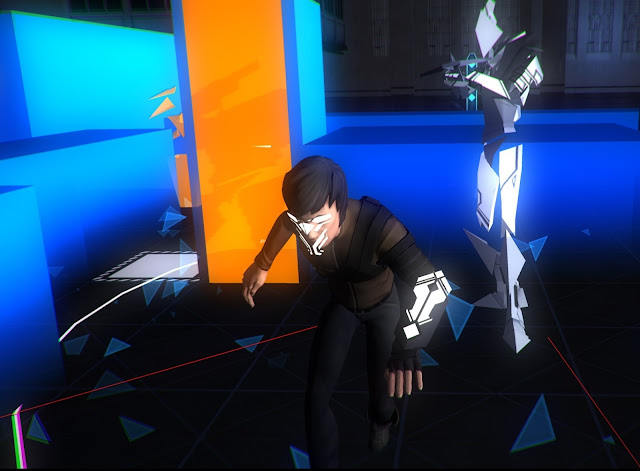 Volume is a title willing to take some chances, and most of those risks pay off handsomely. The visual style is minimalist yet unique, the gameplay mechanics are interesting and the level design is solid. I do wish the story had been a bit more interesting, because at the end of the day the game is unique enough to be worth a look, but not riveting enough to keep me glued to the screen either.

Our protagonist is a man named Robert Locksley (rather like Robin of Locksley, no?), a kindly thief who stumbled upon a device with military designs called “Volume”. Volume allows Locksley to exist in a virtual world that allows him to make mistakes as he attempts to steal from the rich.  In doing so, Locksley has found a way to utilise the device to replicate difficult heists and broadcasts them out to the world so those who would imitate him can actually perform said acts of thievery in real life. This allows Locksley to stick it to these wealthy people without performing any acts violence. He relies solely on trial and error as well as stealth to succeed.

The story itself was somewhat underwhelming, but the voice actors did a good job with what they had to work with. The minimalist art style means the game isn’t overwhelmingly beautiful, but it fits the theme and make it very easy to identify items in the environment, which is key to success. The idea behind each level is to collect riches displayed as diamonds on the screen. Once you have collected all of them on the level, an exit opens up and allows Locksley to advance to the next level. 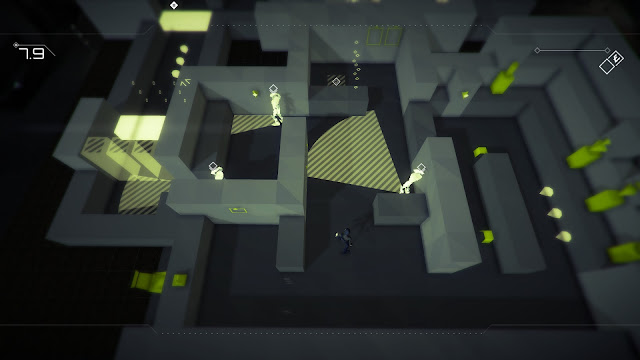 Early on this is a matter of simply running around and learning the controls. However, things get much more complicated when guards enter the mix. They have very strict lines of sight directly in front of them that expand outward like a cone. The guards are absolutely oblivious outside of these cones of sight. I suspect that Locksley is supposed to be someone who walks very quietly, but he can literally walk right up behind and even adjacent to a guard and not be spotted, which might work from a mechanical point of view, but doesn’t make a lot of logical sense.

If Locksley does fall into the guard’s line of sight, the guard usually waits a second or so before firing a fatal shot. Sometimes the guards can be escaped by using an evasive maneuver and breaking line of sight long enough for the guard to lose interest in pursuing him. Of course things get complicated quickly when you are trying to escape one guard while not running into range of another. Most of the time, getting spotted leads to getting shot, with resets you to the last checkpoint in the level. Thankfully checkpoints come frequently enough that the trial and error does not often become terribly frustrating.

If this was solely about stealth, Volume would probably fall flat over the course of its one hundred levels, but there is a bit of strategy sprinkled in as well. Sound is your greatest weapon in this game, as there are items on the walls that can be triggered, or you can make Locksley whistle, that can send a guard peeling around the corner to see what made said noise. Usually this works best when Locksley is on the other side of a wall from a guard who cannot currently see him. The guard will leave his post and come around to investigate. This creates a visible walking path to then take advantage of in order to reach the valuables. 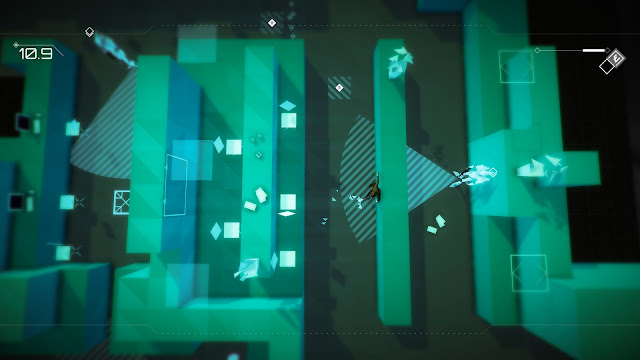 Other mechanics include flatting Locksley to a wall, which guards are usually completely oblivious to unless they are looking right at him from short range. Additional tools like a direction noise gun allows Locksley to ricochet a sound off of walls so that it bursts near a guard and force them to move from their location and investigate. The gameplay is generally slow and thoughtful, though it never really elevates much beyond what I have already mentioned. The one hundred levels actually melt away fairly quickly, and before long I had beaten the game. Leaving pieces of paper to be read throughout the levels serve as your collectibles and they attempt to supplement the story, but since the narrative was never my favourite aspect of the title, the collection side of the game fell rather flat for me.

The ability to craft areas of your own and upload them to share with others certainly adds some replay value to the proceedings. The editor is fairly intuitive and there are some very creative designs already starting to populate the game’s servers. This should extend the life of Volume for fans of the game’s mechanics, though like the core levels, even these did not keep me hooked for a terribly long time.

Volume deserves credit for being fresh and accessible, but after a couple of dozen levels or so, it starts to grow repetitive. It was easy to pick up the controller and play, but without a lot of new innovations and a middling storyline, it was also entirely too easy to take breaks and move onto something else.

DDNet does Japan! Day #9: Time for another history lesson!

The first review of my book has hit the press, and…