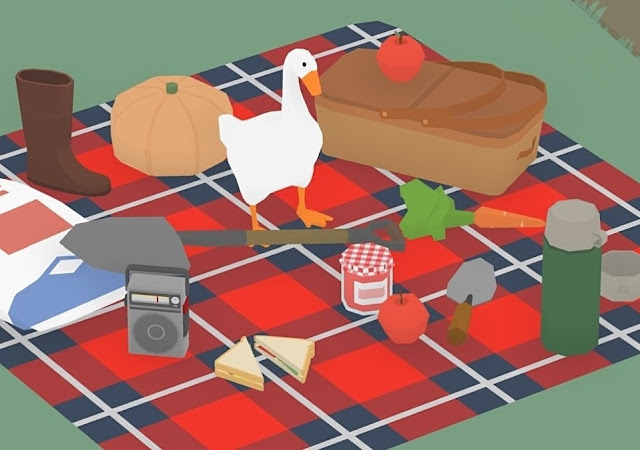 Untitled Goose Game is the perfect game in its simplicity. It gives players a toybox, and then encourages them to mess it up in whatever wildly creative way they can dream up. Every second of it offers up the driest of dry humour which, coupled with airy soundtrack and charmingly personable visuals, is the mark of a confident, clever development team. Best of all, you play as a goose, who is a bit of an arsehole. This little fact can’t be overlooked. The goose is terrible, and that’s exactly what makes him delightful.

From the moment that goose pops his head out of a bush at the start of a game, you know that he’s all about trouble. There’s something so viciously mischievous about his cute little face. Seconds later you’re dunking some poor sap’s sandwich in a lake, and honking at a farmer, purely because that’s the arsehole thing to do. You’ll be stealing everything from carrots to radios, balls to keys, and while this does, very rarely, break the game (when I successfully stole the farmer’s keys after he’d left the farm, closing the door to lock him out, he just stood at the waist-high fence, looking sadly at the land he apparently thought he could no longer access), you’ll still do it anyway, because when the AI does go a little wonky it’s all the more hilarious. It doesn’t last long either; you can always break the farmer out of his philosophical musings with a good loud honk.

Untitled Goose Game has objectives, in theory. These objectives all involve – you guessed it – the goose being an arsehole. The objectives have great fun with that too – the main “task” in the first area, for example, is to collect a “picnic” together. This means stealing sandwiches, jam, carrots, radios, and the like, and depositing them on a picnic blanket. Watching the pile of stuff accumulate messily on the blanket, when the goose clearly has no interest in having an actual picnic, is that dry humour I mentioned earlier. It’s so subtle that it doesn’t sound funny to read described, but in action, it’s laugh-out-loud stuff to watch the goose go about his “work”. The tiniest, most precise animations are what makes it work. Goose can’t talk – obviously – but he has as much personality as we see in the grandest RPGs, precisely because of the eye for detail in how he moves and interacts with the people whose days he’s ruining.

Goose is my hero #NintendoSwitch pic.twitter.com/eTgDvSOGye

There’s no mandate to finish those tasks at any pace, and for the most part I get the sense that the developers didn’t really want objectives at all. A feeling of obligation to make Untitled Goose Game a “game” probably drove the team to it, but really, the devs clearly want you to simply get in there and see what chaos you can create. Each of the five “areas” works like a tiny open world of things to do and play with. By “tiny” I really do mean exceptionally small – you can traverse the sum of each area in a few moments – but each is also so filled with things to do (and trouble to cause), that it’s the right kind of “open”; Untitled Goose Game is determined that you don’t have a dull moment while you’re playing it, and I’d be very surprised if you do.

Goose’s adventure is also refreshingly brief – if you focus on the objectives themselves in order to “beat” the game, you’ll be looking at about an hour in total. This is mature work from the development team – a comedian that repeats their jokes over and over and over again ceases to be funny and quickly become irritating, and the team at House House knew that they were better served finishing with a standing ovation. At the same time, the actual game is going to last much, much longer, because you’ll forget those objectives and nonsense like making “progress” every time you come across a shiny new thing to terrorise the locals with.

Other than picking things up and depositing them in the most inconvenient locations possible for their owners, Untitled Goose Game is, nominally, a stealth game, complete with requisite parody of Metal Gear Solid. Most of the objectives involve getting the “loot” and making off with it without a person noticing it and chasing the goose down to get it back (people are faster than the goose). There’s also the occasional moment where you’ll need to compel someone to move to a certain spot (so you can do something horrible to them to ruin their day). 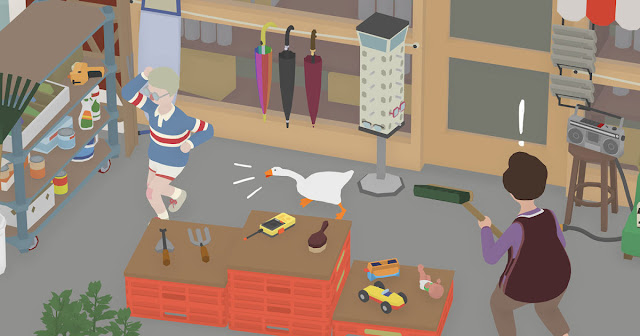 The reality is that this stealth stuff doesn’t really work all that well. Because it’s mechanically so simple, there’s no sense of strategy behind how you go about setting up your ambushes and tricks. Likewise the goose’s victims don’t really move in the clear, neat patterns that most stealth games do to help you plan out your strategy, and their sight ranges aren’t projected either, meaning that sometimes you’ll get caught when you thought you’d be safe. Finally, the camera options, even at their most zoomed out, don’t give you a clear enough view to take in everything.

But none of these “issues” are really issues, because even if you completely mess up and get caught, there’s no consequence, game over screen, or loss of progress. The hapless victim simply shoos the goose away, replaces whatever item he just tried to steal, and then goes back on their merry way, leaving you open to try the exact same trick again, if you’re so inclined. So, aside from the very rare moment where you need to figure through a “puzzle” of sorts (how to get those kid’s spectacles), Untitled Goose Game is focused firmly on being something that everyone can enjoy.

Enjoy it I do. So, so much. Untitled Goose Game is the most charmingly misanthropic game that has ever been created – and that’s something I didn’t even think was possible. This goose is, after all, running around with a single-minded focus on ruining people’s days in the most charmingly nasty ways imaginable. It’s genuinely, deeply funny, refreshingly creative, and truly playful. What Untitled Goose Game reminds you is that not enough games, which are meant to be about play, are anywhere near playful enough.

TGS 2019 Interview: On Utawarerumono and its Ainu influences