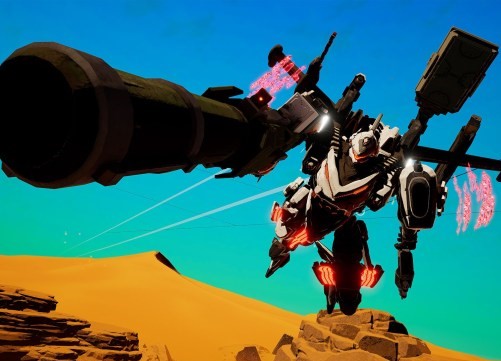 With the moon having been cracked open by an unknown force, and part of it crashing down upon the earth in a catastrophic event, a new breed of AI have spawned, taking over existing machines with one purpose: to destroy humanity. Waking up some years later as the newest mercenary to help defend what is left of humanity, you are what is known as an Outer, a human with the gift to truly pilot an Arsenal (a giant mechanical suit). Loading up the systems of your Arsenal, it won’t be all sunshine and rainbows as you’ll more than have your work cut out for you, as crazed enemy AI turns out to be the least of your problems.

Coming right out and saying it, Daemon X Machina is the new Armored Core that we’ve been waiting for. With FromSoftware currently occupied with pushing out Soulsbornes, there’s been a void of true in-depth giant customisable mechs, with a storyline that will have you questioning your actions. Call signed Rookie, you’ll be gearing up and taking contacts alongside others belonging to mercenary groups, which sets in motion the mission based structure that you’ll be following. The best part of this structure is that it doesn’t just set in the gameplay, it sets the tone for the story as each mission is its own event.

Mechanically, Daemon X Machina is fantastic. You get to adjust the details of your mech to your specifications which only gets easier with time as you unlock new parts and processing units. Head, body, left arm, right arm, expansion packs and your legs can all be slotted separately allowing you to range from the tankiest of mech suits to the fastest that cannot be touched but one real hit will take it out. With some weapons being built into the arm units themselves, the possibilities start to become a tad “endless”. You’ll need to experiment with all of these options as the challenge only gets harder the further you move through the merc ranks and into a mystery that you now find yourself within. 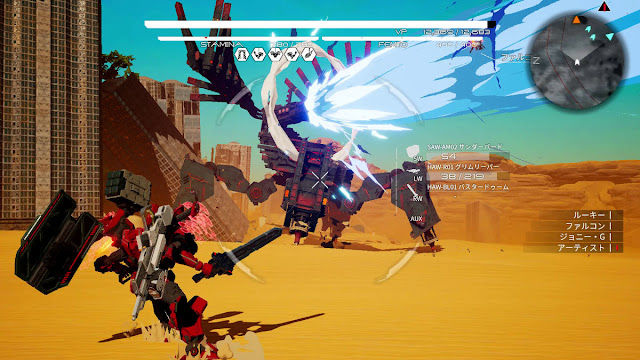 Taking your mech out onto the battlefield, and you’re going to be free to move around either on the ground or in the sky to fulfill your missions. Either feels smooth and can only ever be smoother depending on your equipment loadouts. Aiming your weapons is extremely easy and depending on your processors, your targeting is adjusted accordingly for either a super fast lock on to enemy targets or a slightly slower one that you’ll have to adjust to. This affects all of your weapons, from short-ranged beam sabers, katanas and shotguns to long ranged weapons like sniper rifles, missile launchers and ogre cannons. There’s plenty to um- and ah- about in selecting your loadout, is what we’re saying here.

While aiming your weapons is key to not waste your limited ammo reserves, knowing what each weapon does on the battlefield will truly be the difference between success and failure. While both arms can be equipped with weapons, or just one if your arm is a built in rifle of its own, you’re allowed to equip two other secondary weapons alongside a launcher and an auxiliary device like boosters, an ammo reserve, trap mines or chaff flares. There are times where offense is not the best defense and you’ll want a shield on hand in order to block the incoming damage as you make your way closer. Do you keep a long range, short range or melee weapon in the other? That’s going to be up to you and your play styles according to what you’ve picked up.

While I absolutely loved the gameplay and all of the options to configure and design my mech, it was the story that truly surprised me and had me keep going mission after mission to find out what was going on. Waking up from your surgery, you as a player get to see the world through your newly awakened character’s eyes. Whether jumping into your cockpit or moving around the main hub while customising your mech, enhancing your own body parts through more surgery or just chilling and eating ice cream, it’s your story and each move forward unfolds just a little more of what has been laid out before you. 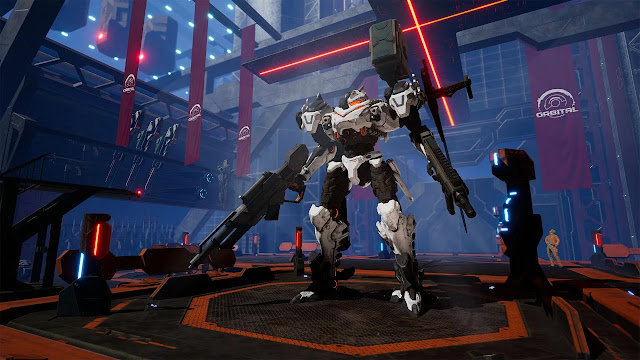 With the mission based structure in place, some missions will be short and sweet, others will be long and an actual test of endurance against mega foes the first times that you face off against them. In either of these cases, you’ll be partaking missions alongside a horde of different mercs from different groups and backgrounds. Chatting before, during and after both during gameplay or through cutscenes, there’s never really a “downtime” as even if you’re on foot and infiltrating a base, there’s the story of you Metal Gear Solid-like stealing that sweet piece of tech and then running away from the ensuing chasers that would rather shoot you dead than take you alive.

The best part of all of this is that just a mission or two prior, those chasing you were on your side. It only ever helps to reinforce that this world is a world that is currently running on money and offers from the highest bidder. You’re charged to defend something, someone else having taken an offer from another organisation is there to destroy it. Everyone you meet has their own ideals. Just about everyone that you will meet is just as willing to shoot you down as to defend you in a pinch when things get real against the enemy AI forces. That said, the ferocity, nonchalance and the camaraderie are all very much there and it makes Daemon X Machina more than just a Mech Simulator. It makes it a Mech Simulator with a story that makes you want to go back for more.

There’s no denying that Marvelous can make a game, but to make a mech simulator of this calibre… That I didn’t expect. I was pleasantly surprised and Daemon X Machina is proof of just how well Marvelous can execute on great ideas. With the Armored Core series currently on hold, the void of its absence can finally be filled with this highly customisable and equally story-driven experience.