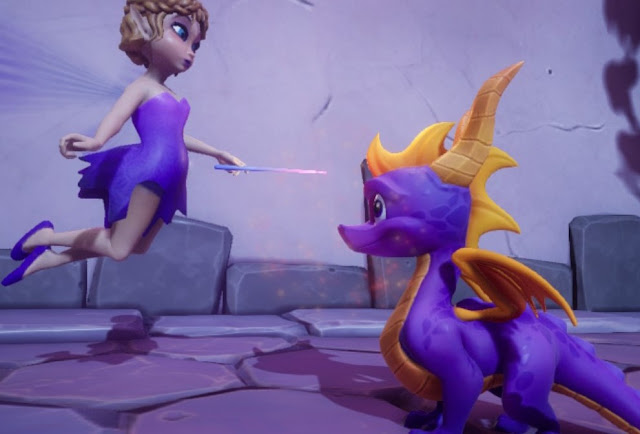 Spyro Reignited Trilogy has been released on the Nintendo Switch in September 2019. This is over twenty years past the release of the original games on the PlayStation One. Developer, Toys for Bob, clearly considered this a labour of love and as a result has given Spyro, the pint-sized purple dragon, a significant facelift. Spyro Reignited Trilogy consists of three full games – Spyro the Dragon, Spyro 2: Ripto’s Rage! and Spyro: Year of the Dragon, and to this day they hold up – they certainly don’t feel like games of that era.

Spyro the Dragon has the most basic story of the three, which is of course to be expected from the first release in the series. The main antagonist of the game, Gnasty Gnorc, has turned all the dragons into crystal and it just so happens that Spyro is the only remaining dragon who escaped this fate. There are only two cutscenes during Spyro the Dragon and they are at the beginning and the end of the game. Therefore, during the duration of the game, the player just spends their time traversing each level collecting gems and rescuing dragons who do provide little narrative snippets that might better be served in an area already completed. Even without much of a story, the first game still holds up on its own and is an entertaining play.

Spyro 2: Ripto’s Rage! is the second game in the trilogy and is a rather large step up from the previous entry due to the inclusion of an actual story. The story in Ripto’s Rage! is brought to life by a considerable number of cutscenes and a diverse cast of non-playable characters that Spyro interacts with. The story begins when Spyro and Sparx take a holiday in Dragon Shores before suddenly being transported to Avalar. Spyro soon discovers that he has been transported to Avalar as they residents believe that the only way that they can be saved is with the help of a dragon. 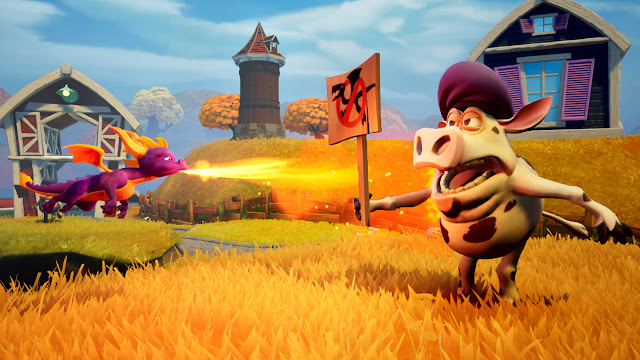 Spyro: Year of the Dragon is the third and final entry of the series and tells the story of Spyro and Hunter as they travel to The Forgotten Realms. The awful villain called The Sorceress has stolen the dragon eggs and it is up to Spyro to retrieve them. It is in Year of the Dragon that Spyro is not the only playable character which adds flavor to the story.

The gameplay is stereotypical platforming fare; which is to be expected from platformers hailing from the 1990’s. This is not a bad thing however as fans of the series will appreciate the nostalgic feeling that this provides. All three games have an over world in which Spyro traverses back and forth to enter the portals to the different levels. The player controls Spyro as he dashes, glides and burns his way throughout worlds with the goal of collecting gems, dragon eggs, rescuing dragons and setting bad guys alight. There are also flight levels that break up the momentum of these levels by providing players the ability to navigate Spyro as he glides through the air collecting colourful gems of numerous numerical values. Each game is presented as an option as you boot up the game – including the overall completion percentage and it is player choice as to which order that they play them in – chronological or otherwise.

It goes without saying that the remastered versions of the game look breathtaking and it is clear that the developers put an incredible amount of work into truly making the environments come alive. Not only has Spyro had a complete overhaul but so too have all the dragons and other characters in the Spyro universe. All the dragons are now fully clothed and personalised and characters such as Sheila revamped to look vastly more modern as opposed to their original arcade-like appearances. The graphics have a more realistic feel to them whilst still maintaining the obvious cartoon-like vibe throughout the three games’ unique levels. It’s hard not to notice little details throughout the game such as the additional details included in the skyboxes and environments. 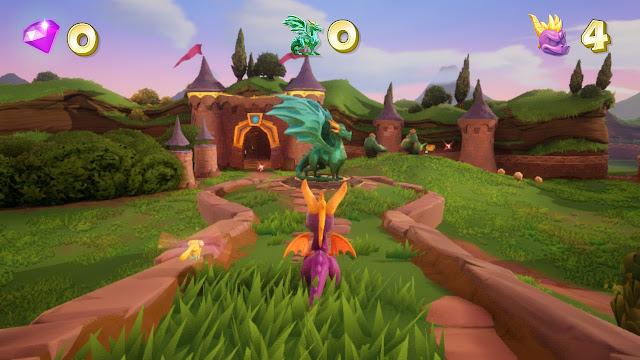 Graphical enhancement is not where the changes end though as Spyro Reignited Trilogy’s music score was also updated for the release. Toys for Bob had Stewart Copeland – the original composer – return to create the music that plays during the opening. The other music in the game has been electronically remixed however still recognisable and players are able to choose between the updated soundtrack or the original one at will. Changes also exist regarding voice acting too with Tom Kenny voicing Spyro in all three games as opposed to just the second and third of the originals and a few other characters such as the balloonists and fairies now having spoken dialogue and other characters such as the Tikis switching from American to New Zealand accents.

Spyro Reignited Trilogy is an incredible leap from the original releases two decades ago. However, there are still issues that impact the overall enjoyment. The first one is the camera throughout all three games. In the originals it wasn’t ideal, but a relic of the time and it worked. However, in the remasters not only does it work the same way but the camera is zoomed in more closely on Spyro, which makes it harder to see, and therefore perform certain actions. This is particularly prevalent when performing a super charge and trying to navigate turning corridors at speed. It can often feel more like guesswork when trying to remember where to turn at times.

Toys for Bob has clearly done an excellent job bringing Spyro to the modern audience. The story, world, characters and gameplay are exactly as they were twenty years ago with just the right amount of new paint to dazzle both veterans and newcomers alike. The inclusion of all three games in the trilogy provides the player the opportunity to see how the series grew and developed, and creates hours of fun in the vividly colourful world of dragons.