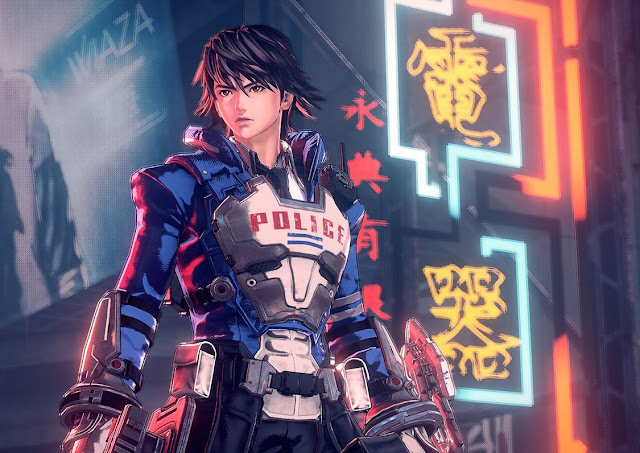 There’s been a lot said and written about Astral Chain’s use of police as the heroes. From major publications (Polygon and Vice) through to blogs, and then on to social media, the question of why PlatinumGames would lionise the police seems to be a core concern for a lot of people. They see it as a weakness, too – there’s the implication among much of the commentary that PlatinumGames made a poor choice with its supposedly uncritical portrayal of its characters and the role of the police force.

The reason, to paraphrase most of these people, is quite simple: In the west there is a significant undercurrent of hostility towards the police forces, and to ignore that, they claim, is to miss critical context within the game. The argument is not without reason. Police forces in western nations (most particularly America), are not seen to hold up to the “protect and serve” ideology that society expects of them. Stories of corruption and brutality are rife, and the level of accountability that should be there is just… not. My good mate, John Oliver, does a great job of covering just how bad the situation with America’s police is, and I’ll embed a video below to give you the full context.

So it’s understandable that people who live and participate in the western world have a healthy skepticism of the police, and find it uncomfortable when art fails to engage with those criticisms of on some level. Were Astral Chain developed by an American developer, then you’d want to ask questions about the underpinning thought that is going into those games. Much like how we should be far better at questioning why the depiction of American/western military forces in Call of Duty and Battlefield does not reflect the very real concerns around how those forces actually conduct themselves. The media is remiss in that it doesn’t generally raise that question, but that’s another topic for another day.

The problem that all these op-eds and social media thought bubbles have is that they fail to take into account that Astral Chain isn’t even about America, or the west. It’s not made by western developers and, while it has been localised for release in the west, that does not mean that it was made for the west. It’s made by Japanese developers about a fantastic, futuristic Japanese setting, and, to be blunt, Japan simply does not have the same hostile relationship with its police that America does. In the context within which it was made, Astral Chain’s flattering depiction of the police forces is both culturally appropriate and accepted comfortably by its audience.

Let’s be clear, here: the Japanese police are by no means above criticism. Once academic work from The University of Tokyo notes issues such as “the widespread embezzlement of money from police slush funds; the corruption that occurs because of police control over Japan’s massive pachinko pinball industry; and police relations with organised crime,” as just three areas of major concern with regards to Japan and its police. That research is a bit old, but nonetheless it remains relevant and pertinent as an example of the wealth of criticism that can still be directed towards the Japanese police.


However, at the same time, the Japanese population, as a population, have nowhere near the hostility towards their police forces, and the Japanese people, as a whole, still see the police as being in service to the health and well-being of the population. Part of this is because the police fulfill roles beyond that of policing; the local Koban is as much a safety blanket as anything else, giving people the comfort of knowing that there is a police officer in every local community, even if the proper police stations are spaced out as far apart as in any other major city. Because crime in Japan is generally low, Koban staff find themselves doing things like helping trapped cats, acting as the community lost and found, and giving lost tourists a helping hand. They’re there, they’re visible, they’re genuinely accessible, they do good for the local community, and they’re just one area in which the Japanese police stand out as having a less antagonistic relationship with the rest of society.

Most of the police you’ll see around in Japan are not heavily armed to the point that they almost start to look like military. They do a lot in public that helps boost their image and train in methods of crowd control that is personable and anything but the standoffish, authoritarian approach that we often see with western police forces managing crowds. The Japanese police are not perfect, but very few in Japan wish to throw rocks at them (or worse), either.

Astral Chain, in general, doesn’t offer the deepest narrative or thematic experience, but even then, the game does adequately deconstruct the role of the Japanese police in Japanese society. It takes a satirical approach to the sometimes bumbling outreach efforts (the mascot dog being surrealistically creepy, for example), and at a broader level, the entire game can be seen as a reflection of how ineffective Japan’s police force can be at dealing with the really big stuff – which is a common complaint among the population. You’re there playing as the one and only hero that can do something about the actual apocalypse, while the entire rest of the police force can only sit back and rely on you.

And even then you still need to spend your time on the most trivial police work as well. Great use of resources there, cops.

The point is that Astral Chain in general is not intensely narrative-driven, but what is there is a reflection on Japanese culture, by Japanese artists. To analyse such a work through the lens of western expectations is downright imperialist. It’s imperialist to expect another culture’s art to answer to the expectations, concerns, or points of sensitivity of the American culture. The question “why are the police heroes in this dystopia?” is far more insidious than it might seem. That’s not a question on personal taste. It’s a question based on culture, and sitting under it is the expectation that anything foreign to the context of the questioner’s culture needs to be re-framed to suit the questioner’s culture or, in a best case scenario, something that needs to be actively defended.

That attempt to homogenise art, and define the standards of art from the perspective of one central culture is the biggest issue that the games industry faces in its development as an art form. No one expects a Japanese author to build their stories around what Americans find acceptable. The same goes for film. When there is a cultural conflict, Americans simply take those stories and re-work them for their own cultural context (Battle Royale becomes The Hunger Games. The Ring ends up getting those Hollywood attempts). In video games, however, Japanese developers continue to need to justify their art based on how Americans will respond to it, and for an industry where the progressive elements claim to cheerleader for “diversity”, that seems to be a particularly strong resistance to cultural diversity that is, if anything, getting stronger over time.

Of course, many game critics (or media writers in general, frankly) haven’t been to Japan. Even fewer have spent enough time in the country to come to an understanding about areas where the culture is different. Even fewer still have taken the time to try and understand why it’s different, and then the number of writers who have been able to cast off their own cultural expectations to understand that Japan being different is not the same as Japan being inherently worse is rarer than hen’s teeth. Nonetheless, ignorance is not an excuse, and failing to take cultural context into account when analysing an art work is very poor critical technique.

Let the Japanese make their hero cop games. Not every country is as dangerously dysfunctional as America is, and that level of dysfunction is certainly not something that should be the standard by which we assess good storytelling.