I’m not sure there’s any developer out there that understands movement quite like PlatinumGames. Astral Chain is an incredibly fast game when the action scenes kick in, but the sheer agility and grace with which your avatar moves is almost dance-like in its elegance. In fact, given that you’re actually in control of two characters – the other being a demon bonded to your character’s will – the way you need to make the two work together to dynamically zip across the battlefield is very reminiscent of the way a ballroom or ballet couple work together on the a dance floor. As a dancer myself, I loved the raw connection of Astral Chain to the form and structure of movement.

It can feel like a dazzlingly complex game to play, with so many button inputs and commands, and not all of them are as intuitive as they should be. Summoning your demon requires one particular shoulder button on the left hand side, for example, but dismissing it is not the parallel shoulder button on the right, like you might expect it to be. Muddling through these controls and command inputs can be initially frustrating – particularly considering the speed with which enemies move, and the tension of the heat of the battle – but as with complex dance figures, with mastery comes finesse, and in Astral Chain, finesse feels truly great.

The backdrop for all this action happens across two worlds. One is the “real world,” in which humanity is facing an apocalypse brought on by mysterious, monstrous chimera. In PlatinumGames’ vision of the apocalypse, the world looks like it has been taken from Blade Runner, though in a quaintly Japanese spin on the cyber-noir blend, the police are still celebrated for the good work they do. The establishment might have issues, but the relationship between the “protect and defend” police, and the community, is on balance a good one. 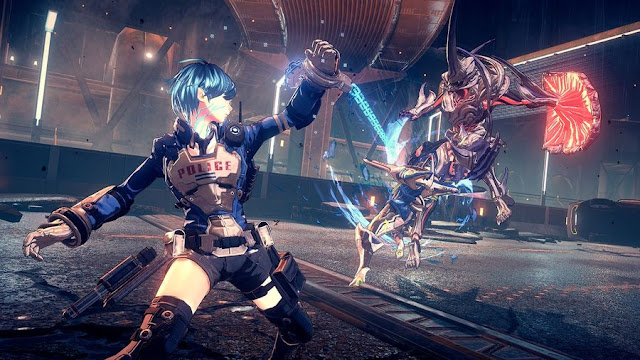 That’s why you’ll find yourself spending a lot of time chasing down graffiti criminals and other minor malcontents, or helping cats out of tight positions. Because of various narrative reasons you end up being the only person that can save the entire human race early on… and yet you still find time for the positively domestic tasks of the police. Astral Chain has a wry sense of humour, and likes to dip into both the surreal and the absurd at times. It’s nowhere near as tonally cohesive as it needed to be to be a classic, but its charming after a fashion, and it has a way of keeping you on your toes, such that the 25 hour (or thereabouts) run time over its 11 chapters never feels like a drag.

The other world is the astral realm – the homeland of the chimera. As you’d expect, this is something of a hellscape, with monsters, environments of clashing geomatic shapes, and a drenched use of colour. It’s gorgeous in its utter hideousness, and shows that the team behind this game had a vivid imagination indeed. The astral realm – or plane – is a medieval concept that is common to most religions, and is effectively the spirit realm, where the consciousness is said to reside, and spirits pass through on the way to being born, or pass back through after death.

It’s a common location for creators to indulge precisely because it’s close to human spirituality and therefore offers a creative free-for-all, and certainly a lot of action anime make the astral plane central to their narrative, which Astral Chain is very much in service of. In that world there are all kinds of puzzles to solve (but this is a PlatinumGames title, so if you actually get stuck on them… I worry for you), some platforming elements and, of course, bosses to fight. 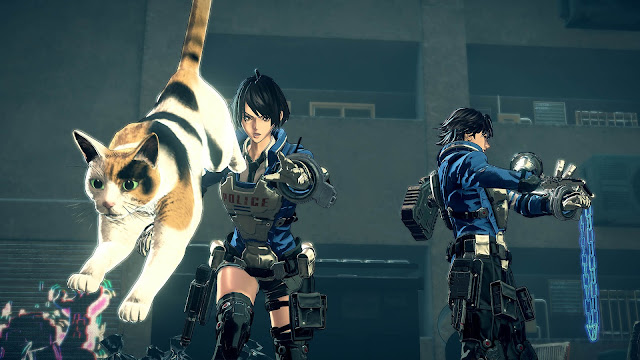 Bosses show PlatinumGames’ typical penchant for rich attack patterns and puzzle-based solutions to those attack patterns. In fact, most of the bosses worked better as brain teases than the game’s dedicated puzzles. Once you’ve mastered the control system and can “dance” with your bonded astral slave, the mobility that the boss battle space supports, and the ability to set up and execute traps to disrupt those boss battles make Astral Chain’s highlight action moments so much more than simply fast reaction times and twitch reflexes.

Equally impressive is the range of customisation that is available. Skill trees, abilities, and other features are all fully alterable. Both you and your Astral companion need to have complementary skills, and as much versatility as possible to account for every challenge. As you unlock different Astral companions (you’ll end up with five), you’ll have such a wealth of combat options that you’ll almost be paralysed for choice. In those moments you can always take a time out to go get some cyber-noir selfies. PlatinumGames, in its early incarnations, struggled to understand the value of downtime. Astral Chain shows a lot of maturity there, as it allows its lovely world to breathe.

Even more than the photography, my favourite non-combat moments were the investigations, where you need to wander around, interrogate suspects, recreate crime scenes, and gather evidence. At the end, you’ll be quizzed on various elements of the case, and you’ll need to pick the right keywords to fill in the blanks. It’s never of the complexity of the cases you need to put together in Phoenix Wright or Danganronpa, but it’s another sign of the confidence of PlatinumGames. The team that worked on Astral Chain knows they had something more than a great action engine here, and they ran with it. The number of side-activities, for a linear game that isn’t “open world” on any level, is truly impressive, and usually it feels more like those are there for world and character building than padding. 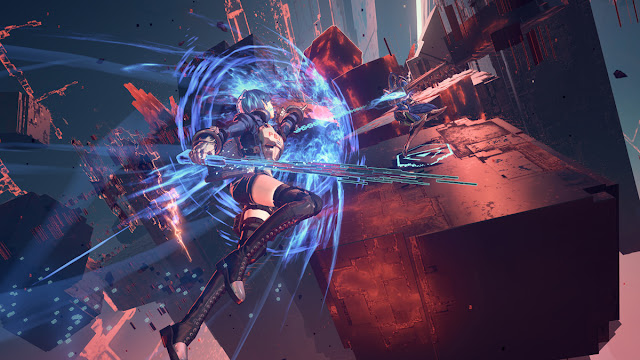 For all the good – and there really is so much to love about Astral Chain – the game does demonstrate the value that PlatinumGames finds when it has someone like Yoko Taro to work with. Astral Chain and NieR: Automata share DNA in the way that they approach action, thanks to the PlatinumGames touch. Both games offer mesmerising, dance-like action movement. However, NieR: Automata layers rich, vibrant philosophical musings over the top – the search for humanity, the purpose and development of religion in society, existentialism and a dozen other themes all sit there in that game for anyone that wants to dig out Jean Paul Sartre as the companion reading piece.

Astral Chain by comparison is thematically shallow. It does a good job of establishing world and sympathetic characters. It has a good sense of humour. Its story also has some truly great twists… and those aren’t always predictable, even for veterans of these kinds of sci-fi anime games. Ultimately though, Astral Chain isn’t going to leave you with any lingering questions, nor inspire you to read on to learn more about the ideas it expresses. It’s perfectly competent and entertaining, but given just how rich the design is on every other level, it’s hard not to wish it had some slightly grander things to say in the process. It’s a common thread to PlatinumGames, and while Bayonetta is an exception to the rule, too often otherwise with the company I’ve had a wildly good time with one of its titles when playing it for the first time, but never felt the inclination to play it again once the halo effect of the incredible action systems wears off. I’m not sure, at this stage, that Astral Chain will be different. Right now I find the combat systems enchanting. But I don’t find myself thinking about the game, either. That’s usually a sign that it’s more a here-and-now kind of experience.

Astral Chain is both beautiful and mesmerising. You’re not likely to come across a better action gameplay system for quite some time – likely until PlatinumGames’ own next effort. Truly this is a developer that understands the principles of movement in action better than any, and while its games might struggle in other areas to meet the brilliance of the action, every second with that action is satisfying, exciting, and a very pure form of entertainment.