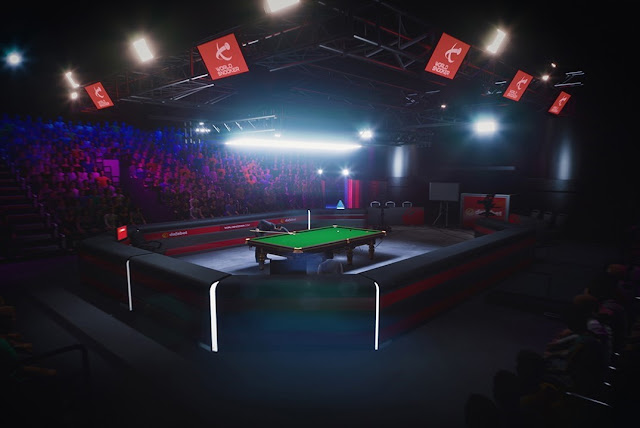 Snooker is a great game and sport. Unfortunately, Snooker doesn’t really work as a video game. The developer of Snooker 19, Lab42, have done a good job in faithfully recreating the world of competitive Snooker, but the team has been unable to overcome the reality that Snooker simply does not make for the most exciting action.

The problem is that the nature of Snooker is such that a player’s turn can take a very, very long time. They meticulously line up a shot to pocket a red ball, and then a coloured ball, and then the next red, and so on and so forth. Any decent Snooker player can almost effortlessly keep this going for 10 or more shots, and because the nature of Snooker is also that you need to monitor what’s going on in order to understand the state of the game, even if there was a fast forward feature (if there is the game never makes that clear), you’re still going to have to watch each and every shot play out. When the AI gets on a roll (and given that it’s emulating players from the top of the Snooker world, that happens often), you’re going to sit back and spend a lot of time simply watching.

The presentation is authentic to Snooker – meaning that competitions arenas are dimly lit outside of the table itself, and competitors are very prim and proper. The audience is restrained and decent. It’s a great aesthetic and atmosphere in the real world, and I do like watching competitions, but in the context of a video game, it comes across as lacking in energy. Players – who are real Snooker professionals – don’t display much of their real-world personality (or any at all, really), so they come across as stiff (but generally well-modeled look-alikes), and the commentary is accurate enough, but limited. A very proper English accent will tell you that you’re about to hit the ball hard, or you’re going for a tough shot, and that’s about it. 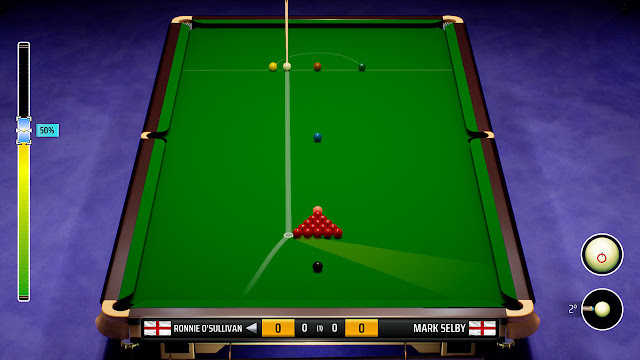 The gameplay itself (when you get a turn) is Snooker 19’s saving grace, because it does play a good game of Snooker. You have full control over power and direction, and the physics engine is utterly precise. When you’re starting out, your can put plenty of assists on, which will tell you where you’ll hit the ball, and how the points balls will react after being struck, but as you get more confident in your skills, you can wind those down for a more authentic Snooker experience. It’s all nicely laid out and completely intuitive to play.

In terms of play modes, there are three key ones. Firstly, there’s quick match, which you can customise from a single frame right up to a 30-odd frame epic. It’s the mode where I spent most of my time, because Snooker, Pool, and other table games are a bit of quick fun. I enjoy a game of Snooker at a pub or club, but I’d never enter a competition (and no, not just because I’d be beaten ridiculously easily). There’s online play, which is something I don’t want to contemplate. The idea of the downtime waiting for a person’s turn in Snooker, coupled with the behaviour of players online, does not make for an appealing image. Finally, there’s career mode. Career mode has issues.

In theory career mode is great, just as career modes in most sports games are great. Claim ownership over a particular player, and watch them work their way through the ranks. Great! Snooker 19’s career mode is borked in strange ways. For one thing, you don’t create a fresh-faced new player. You can only take control of the career of one of the existing professionals. Given that there’s no storytelling or player personality involved, however, this is quite clearly done simply because the developer didn’t want to build a character creator. 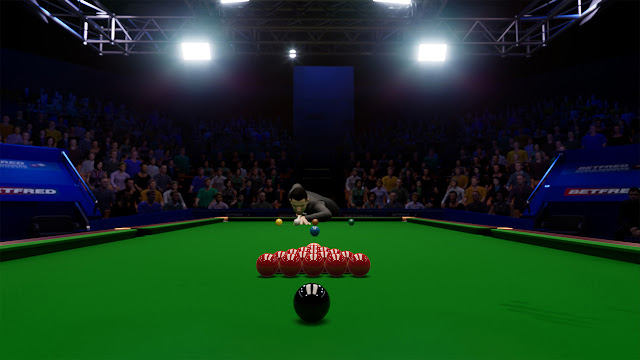 Once you’ve chosen your favourite professional, you’re thrust into tournaments and will immediately come up against the highest-ranked players in the world. The whole point of a career mode is to slowly built up towards the big guns, whether that’s by playing in no-name tournaments against no-name players, or start with qualifying matches and the like where you’re not at risk of playing against the hardest players right away. In Snooker 19, you’re thrown right in the deep end, right from the start, which has two effects: firstly, it means that you’re going to keep losing one demoralising match after another, unless you spend a lot of time training in quick play mode before hitting the career mode. Secondly, there’s nowhere near the same satisfaction of watching a career evolve. There’s no fond memories of playing in dingy clubs, qualifying for a major tournament for the first time, and so on. All those little narrative moments are lost, replaced instead by and endless sequence of matches. Play well and the trophy room will start filling… but that’s no more satisfying than completing a trophy collection on any PlayStation 4 game.

Snooker 19 also assumes that you care a great deal about the game of Snooker going in, and that’s probably a fair assumption, given the limited appeal this will find for people outside of the Snooker world. What this means for those curious but not yet familiar with the game, though, is that the only effort to teach the rules of the game is a clunky, clumsy pile of text buried away in the settings. You’d be better off hitting up YouTube to watch some matches and get a feel for the game first. I also doubt that anyone who even follows the sport cares about people ranked outside of the top 20 in Snooker, let alone those that don’t. The little bios and whatnot for the lower ranked players are as pointless as the license for them.

For the very small niche of people who care that much about Snooker, however, Snooker 19 does deliver. There are more accessible Pool titles out there – including on the Nintendo Switch itself, but as an attempt to go the full distance with a deeply authentic simulation, Snooker 19 is a good and genuine effort.

A Japanese novel you should read: The Thief