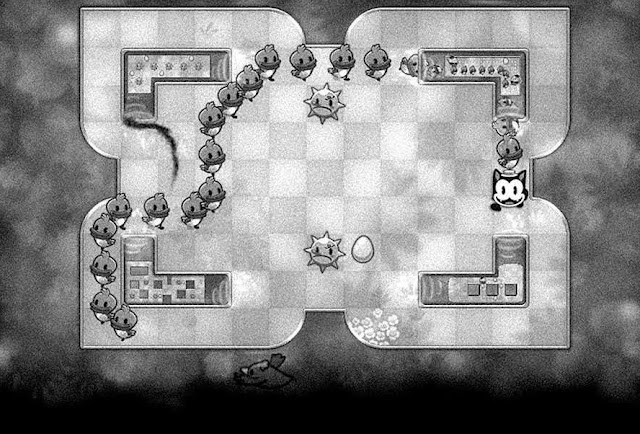 Pix the Cat is a groovy little arcade game, featuring a groovy neon cat, groovy little ducklings, and a slick rhythm to play along to. First released back in 2014, it’s now on the Nintendo Switch, and continues to be one of the better examples of modern arcade entertainment out there.

Broadly speaking, Pix the Cat is a blend of Snake and Pac-Man. You need to run Pix around environments, picking up eggs, which turn into ducklings. Each new duckling adds to the “tail” that stretches on behind Pix. Then you need to manoeuvre Pix to escape holes, one for each duckling. Once the environment is clear of ducklings and they’ve all been rescued, you can move on to the next.

You score better for clearing a level in one go (i.e. picking up all the ducklings first, and then getting them to the exits in one go, rather than picking up a few ducklings, getting them out, and then going to find more). That’s where the Snake element cuts in. When you’re going for a really big score, there are levels where you’ll have a long trail of ducklings behind you, and if you accidentally move Pix into the trail, the score bonus will come crashing down. There’s a finely tuned risk-reward system at the core of Pix the Cat, making it the kind of game that’s both challenging and worthwhile to master. 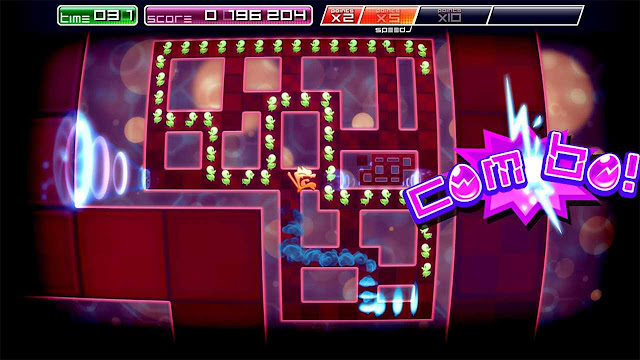 Because small mistakes can cost big on the leaderboard, and because each game only lasts for a few minutes, there’s great replay in Pix the Cat, in the same way that a good time trial is highly replayable in a racing game. The goal of doing better is reward into itself. Pix the Cat does have online leaderboards, though they appear to be for the Switch version alone and, sadly, there aren’t too many people registering scores as of time of writing. Nonetheless, there’s enough competition there, and that’s above and beyond the personal satisfaction of doing well, which makes getting better worthwhile unto itself. See, the game has a pulsing soundtrack that is rhythmically spot-on with the action, so when you do play well, you’re moving Pix in perfect harmony with the music, and it feels great.

There’s a couple of neat secondary modes that extend Pix the Cat’s life further. There’s a multiplayer mode, which is local-only, but because of the simplicity of the action, it’s one of those games that is ideal for the local multiplayer that the Switch offers off the handheld screen. You’re effectively set to play two player, at least, anywhere you go.

The other highlight for me is the puzzle mode. You know how in many JRPGs there’s a sliding puzzle where your character is on ice, and you lose direct control over their movement? Instead you need to use walls and other obstacles to halt their movement, and that allows you to change their direction and help them navigate to the exit? There’s something like that in Pix the Cat, which is the perfect foil to the twitchy action of the base game. I’ve never been overly good at this particular kind of puzzle, but with “par scores” (i.e. a minimum number of movements to solve the puzzle) and plenty of puzzles to play through, I certainly found myself challenged a few times. 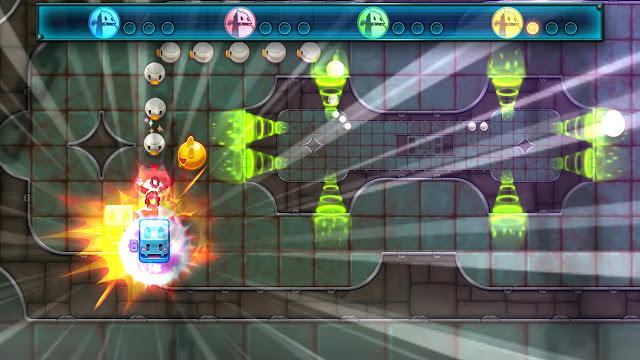 It’s a pity that Pix the Cat hasn’t grown into a larger property over the last five or so years, because Pix is a great character, the neon aesthetic is pleasing, and the action is of a very high standard. While the game itself is simple, Pix the Cat is feature-rich and comprehensive, and the bonus modes really do add fresh new looks at the game, extending its worth further. This is the kind of game that works for short in-between more sustained games, and is something that you’ll keep coming back to for that reason for years into the future.