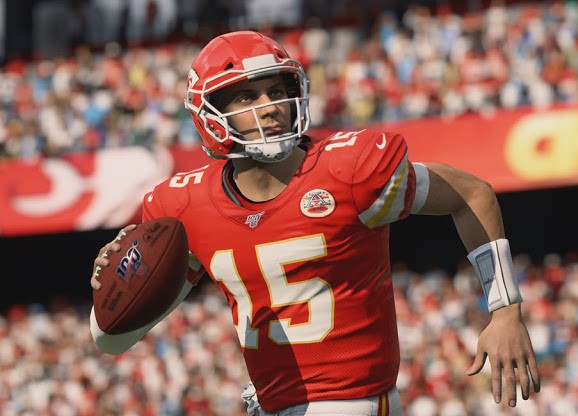 There are a handful of interesting new features to Madden NFL 20 that make it stand out from the year-after-year release cycle in recent years. The biggest of these, the Superstar X-Factor, actually adds a really interesting new dynamic to the game that should give even the most jaded critic of the series some pause.

As a sports fan, every year brings renewed hope (even for someone like me, a long-suffering Detroit Lions fan) and sports video games are no different. With the real sport, you hope that a handful of tweaks to the roster/coaching/schedule can maybe bring about better results than the prior year. Critics of EA’s long-running football series often tout the yearly release hope for something more than a roster update for the video game, and some years that criticism has more merit than others. It has been a few years since there were any new big features that actually impact the gameplay in a tangible, interesting way with Madden, but the addition of X-Factors really does add an interesting new wrinkle to the game.

I am always curious to see the rosters when they are released, trying to see how my favourite teams and players stack up when the stats team at EA start to develop player ratings. I never agree with all of them – but this year’s ratings were somewhat jarring as most players seemed lower overall than in years past. The Lions are not a great team, I get it – but with only one player over 90 (Snacks Harrison) and their second best player (Darius Slay) an 89, and there seemed to be more of a middle class than in years past. However, the X-Factors are interesting new traits that players have that go beyond just their numbers. Suddenly a big pocket-collapsing defensive lineman just has to be close to the quarterback to make an impact, causing his accuracy to drop due to the defensive player’s proximity. No longer does he have to get the sack to have an impact, sometimes it is just being close. Other players, like a defensive rush specialist might have a custom animation that allows him to reach out and drag down the quarterback if he gets close enough, despite being engaged by a blocker. A talented running back with shifty moves like Barkley from the Giants has a better chance of juking out a defender than another running back of similar rating who has a different set of X-Factors.

Given that this system shows up in every mode of play, it is probably the most impactful change to the game this year and one that I actually really enjoyed. It encourages you to build a team and play a player a specific way, so that not all players of the same rating are created equally. I actually cared about drafting players who fit schemes as opposed to just picking the fastest or the strongest guy as in years past, knowing I could fully mould them into what I wanted.

The other big change is that the Longshot story mode that EA has trotted out the last year has been replaced with a new mode called “Face of the Franchise”. The base Franchise mode for the last few years has given you the chance to be a Player, an Owner or a Coach. Those options are still there, but this new mode feels like a touched-up Player version of Franchise Mode. Instead of playing a couple of characters who are fully developed like they were in the Longshot modes, here you name and customise your character (still a quarterback, and the customisation options are surprisingly limited, but at least they exist) as you go through the tail end of a collegiate career (come on EA – let’s get NCAA Football back on its feet again. This just made me want that series to be revived more than ever) and then have some light roleplay moments during your pro career. In particular I enjoyed the combine, which helps you establish your draft position and actually creates some pretty funny moments. If anything, I was disappointed that moments like this aren’t really expanded on throughout the actual mode later, because it was pretty interesting.

Face of the Franchise is actually moving more towards the career mode found in games like NBA 2K, which is not a bad thing at all as that has been my favourite career mode in any sports video game for several years now. There is certainly room to flesh this mode out, provide more player options and more choices along with the storyline, but all in all this feels like a step in the right direction and actually feels the most like a career mode that I recall Madden ever having. I like that it is not quite as scripted as Longhsot was, and while there is still plenty of room for further additions, it is better than just playing Franchise Player mode (unless you are dead-set on playing a different position, like running back or defensive line).

One ‘change’ is the reintroduction of the Pro Bowl (which admittedly, seems weird to call something an addition when it used to be there several years ago). This seems like an odd item to tout, since the Pro Bowl (and All Star games in general in other sports) has not generated much fan interest over the last several years. Even stranger still, it just feels like a typical game of Madden. There are some unique tweaks to the Pro Bowl format that do not get applied here, which makes it the reintroduction feel a bit rushed and uninteresting. It almost made me question if this was EA’s idea, or something that the NFL wanted to plug in a doomed effort to raise awareness for an event that has long since lost any real relevance to fans. I like hearing if one of my team’s players make the Pro Bowl (Lions fan – so they usually don’t), but I haven’t watched the game in over a decade and usually just skim the recap a day or two after it happens. This change is not going to move the needle for me on that front.

There are some small quality of life improvements, such as the gameplay pace moving along just a bit faster and allowing me to get in and out of games and progress through my season a little bit faster. By and large however, everything else is pretty much the same in terms of modes. You have the Madden Ultimate Team (MUT) that mixes fantasy football with card collecting – two of my favourite NFL-related hobbies. There has been some effort over the last couple of years to add depth to this mode, which I appreciate and that trend has continued this season as you have more options to develop your players and improve upon the team than ever. Beyond that, Franchise and online modes are relatively the same.

Look, some people are going to hate this game just because it is part of a yearly release cycle and I get that. Some years the improvements are more notable than others, but for me the shift of Longshot to the Face of  a Franchise and the addition of X-Factors provide some tangible and beneficial changes to the game. Sure, the Pro Bowl is sort of a weird and pointless area of emphasis, but Madden NFL 20 provides one of the most entertaining and polished sports experiences available.