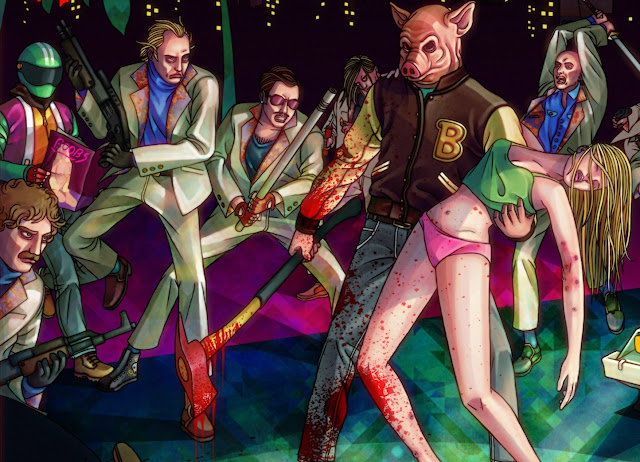 “Why are you doing this to us?” one of the victims in the film, The Strangers (2008), screams out. It’s a film in which a happy couple are attacked by a gang of mask-wearing sadistic killers for no apparent reason. Of course, that apparent lack of narrative reason was the film’s thematic purpose.

“Because you were home,” comes the haunting reply. Much like that film, Hotline Miami and its sequel are gritty, lurid, surreal and bombastic homages to underground cinema that take the idea of senseless violence and make a point of it. It’s The Strangers but at a far more bloody scale. Hotline Miami is a psychedelic murder spree that finds transgression simply in being as extreme as it is, and the bare-minimum effort to give the games narrative context is almost an act of defiance in itself. Throw in the rape scene in Hotline Miami 2 and the developers were almost daring for people to make their games controversial. A dare that certain groups (including the Australian censorship board) were all-to-happy to indulge. Yes, of course this mini-series is exceedingly crass and brutal, and it is just so good at it. And it’s making a point of it all.

There is a flimsy narrative arc thrown over the top of both iterations of Hotline Miami, but its existence is more of a statement in existing than there being a commentary explored through it. Both games deal with masked mobster-types driving over to other mobster-types to fill the rooms with their splatter. Or, to be more explicit, you’re cruising around redecorating strongholds of Russians, with the occasional diversion to kill cops or other such types. The speed in which the narrative is delivered rivals the hyperkinetic approach of Guy Richie storytelling, and the overwhelming speed of the action sets a truly breakneck pace to both games. 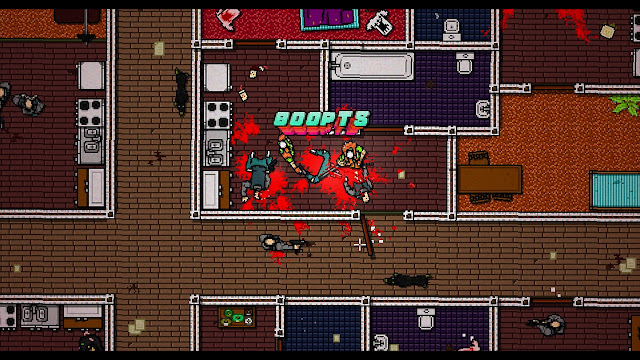 The Switch is a good platform for this as a result, as you’ll be able to rush through a level or two each time you pick the console up. With that being said, I never felt like the aiming was as precise as I might have liked – the Joycons aren’t quite up to the same standard as the PlayStation DualShock for this purpose, but both Hotline Miami titles are very playable nonetheless.

Though the visual design is simple, and on first impressions the top-down perspective on the action seems distancing and like it will dilute the impact of the violence, Hotline Miami and its sequel are sharp. Very, very sharp. Sometimes you’ll kill a dude and he’ll crawl around in agony for a second or two before dying. At other times, a shotgun to the belly will splatter innards everywhere. To move from one area to the next you need to first kill everyone in that area. The bodies stay there, and for me, the greatest moment of impact that both Hotline Miami’s have is that, after you clear a level, you need to go back through every area to exit the building. The carnage that you caused and didn’t pay a moment’s notice to suddenly hits home when you’re in a mental state of relaxation. The game’s already told you the level is over, so you’ve got time to wander back and “admire” your handiwork.

It’s pretty obvious that both Hotline Miami and its sequel are subversive to the violence being done. The narrative doesn’t even come close to condoning or heroising any of its protagonists, but it’s in those small moments when you’re sloughing through innards and stepping over mutilated skulls that the subversion is really driven home. There are very few hyper-violent games that ask you to reflect on what you’ve done. Most of the time, you simply keep pushing onwards, and the bodies of those you slaughter are endlessly put behind you. In Hotline Miami, however, the one quiet moment that you’ll get in the whole experience is those post-level backtracks. Your character moves almost too slowly in those moments… it’s almost boring. And I feel like that’s the point of Hotline Miami. It’s to draw attention to how little attention you generally pay to the violence that you inflict in so many games. 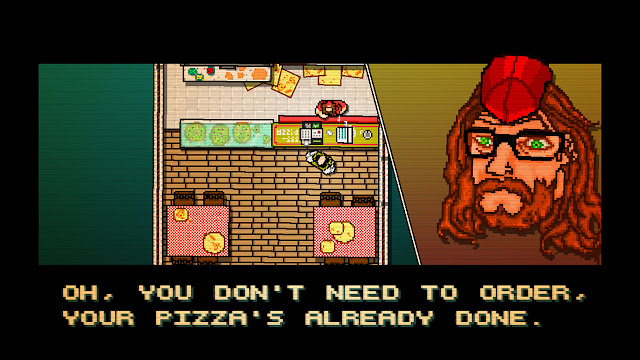 The closest comparison I think I can make to Hotline Miami is another title that was banned in Australia, amusingly enough: Manhunt. Manhunt, by Rockstar Games, also asked you to reflect on the violence being done in the name of entertainment, though in that case it was by drawing attention to the voyeurism inherent to video games. Both Manhunt and Hotline Miami rely on taking violence – the thing this industry is most desensitised to – and ramping it to the point that people take notice and it makes them uncomfortable. It’s telling – and kind of the point of these games – that the “ramp up” had to be this extreme.

If you’ve never played either title before, Hotline Miami is basically a dual-stick shooter, where both you and your opponents are very fragile. A single hit from an enemy will down you, and your job is to work out the easiest path through environments, so you can kill enemies in small groups and avoid being overwhelmed. Guns make noise, attracting enemies from elsewhere, while it might be too much of a risk to try to close on an enemy with a melee weapon. Doors are your friends (you can knock an enemy out if he’s standing behind the door when you barge on through), but windows are not (it’s so easy to be sniped from behind one).

Hotline is meant to be played hyper-aggressively, and yes, that will involve a lot of failure. Each restart takes you back to the start of the most recent area, though, so it’s never much of a loss, and each area is only seconds long. It’s a simple game, so improvement comes more from better twitch-based reactions, as well as slowly developing a better sense of an area and which paths through a level are the most effective. Both Hotline Miami and its sequel are not easy, though, and there’s certainly the potential for both to become frustrating for less experienced of patient players. 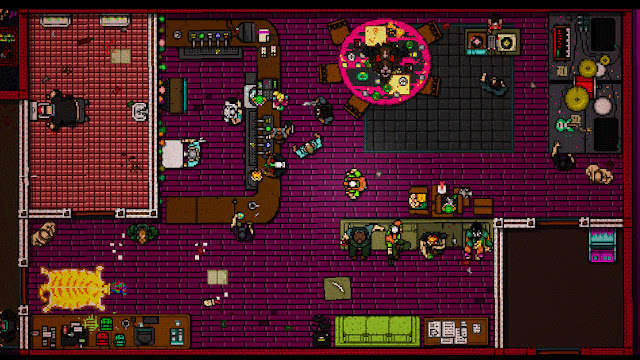 I’d never played either Hotline Miami, but bless the Switch for being so accessible in being region-free. There is, of course, no genuine reason for either game to be banned – yes the second depicts sexual violence (that’s the pretext under which it was banned), but it’s in context and important to the statement that the game is making. Both transgressive and subversive, Hotline Miami and its sequel are both much smarter games that I’ve seen some quarters give them credit for, and brought together into one package for the Switch is a good bit of the ol’ ultra-violence.