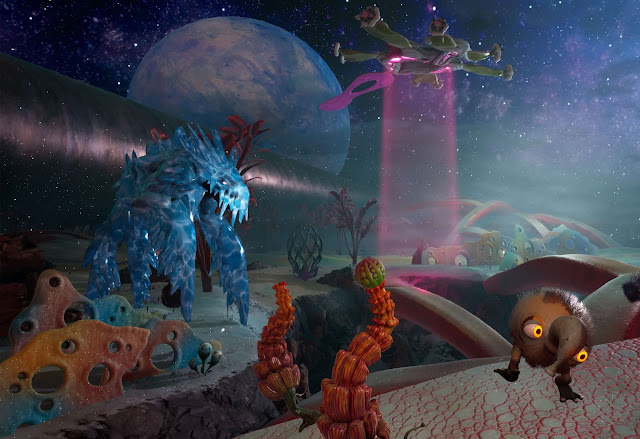 We love everything that ACE Team puts its name to, because this developer is, for want of a better word “unsettled.” ACE Team is always finding new and creative ideas to pursue, and it has one of the most eclectic libraries of all game developers a a result. One of the few mid-tier developers to really be able to push for its own ideas, ACE Team is one of those rare developers to have been able to remain truly independent and focused on their art.

We had the opportunity to sit down and have a chat with ACE Team co-founder, and head of game art and design, Carlos Bordeu, about where the inspiration for The Eternal Cylinder came from, and what it’s like to have been on the forefront of South American game development over so many years now.

Matt S: Am I right in assuming that your team was inspired by Dali when designing The Eternal Cylinder? Were there any other artists that your team drew inspiration from?
Carlos B: Partially. Dali has always been on the back of our heads when designing stuff – mostly out of our love and interest for surrealism. He’s definitely an artist that marked us as we grew up, but we couldn’t say he was the definitive inspiration for The Eternal Cylinder. There is a little of Picasso and Bosch in the game too, but yes, Dali is there more prominently.

Matt S: What is surrealism to you? Is it just an aesthetic, or are there deeper themes that you are driving at with this game?
Carlos B: The project was actually born in a time where I was interested in the subject of consciousness and life & death which is a theme that is tied into the story of the game. A lot of surrealistic art seems to revolve around existential concepts, so it was a very fitting aesthetic for the project. Though the visual concept of the cylinder was what prompted the creation of the early concept for the game, it was around these deeper themes that the project evolved.

Matt S: What keeps drawing ACE Team to surrealistic aesthetics and themes? Right from the start with Zeno Clash it’s been there. Have you ever thought of dabbling with other artistic movements?
Carlos B: I would say surrealism is one of our favorite art styles, but we have done games in other styles. Abyss Odyssey, while still pretty surreal, was inspired by Art Noveau. And The Deadly Tower of Monsters was a whole different thing – paying homage to the cheesy B-Movies of the 50s and 60s.

Matt S: We see words like “open world” and “procedural generation” used to describe a vast range of games now, to the point that they seem to be the dominant trend in game design. As developers do you feel pushed in these directions, and are there any creative limitations to these kinds of games that you need to work around?
Carlos B: The Eternal Cylinder is partially “procedural”. All our creatures are 100 per cent hand crafted (no procedural generation there), and the environments are basically using procedural rules to combine “hand made” content. There is a lot of pre-designed and carefully authored content in the game.

A big reason for this is we understand there are major limitations with fully procedural games, which work more based on a set of rules to create a specific type of experience. We wanted to have full control over our enemy designs, and to make them very distinct from each other. The game also has a starting point, middle and an ending. It has a story. And all the key moments of the game are being implemented as non-procedural content. It has been a big challenge for the game’s design… marrying parts of the game where we have full control, with others where we create an experience based on a certain set of rules.

Matt S: The cylinder seems to be a persistent threat that you’re meant to always keep in the back of the mind as you play. Will The Eternal Cylinder be a challenging or unforgiving game, and if not, how are you looking to make the role of the Cylinder intimidating for players?
Carlos B: At first we explored with the concept of perma-death for the creatures you are playing with, and that when killed you would continue with a new group of them. However we eventually went back to a more traditional design where the game has checkpoints and you can save progress. I wouldn’t say we are looking to do a punishing title, as the game is as much about adventure, exploration and discovery as it is of survival.

A main driving point for players will be to learn about the Cylinder, the creatures you control (the ‘Trebhum’) and the world that surrounds you. However that does not mean that we do not intend to make a great threat out of the Cylinder. We had some really tense moments during demo presentations of the game at Gamescom, where people would be running for their lives and barely make it to a safe area on time, with the Cylinder rolling right behind them. It was really interesting looking at people’s faces when they were close to being crushed!

Matt S: As someone who has been a big fan of ACE Team for many years now, the best way I can describe your work would be “eclectic.” Are there any themes, or points of commonality across your library that you would like people to think of when they think of an “ACE Team” game?
Carlos B: We are honored! I think the main thing we thrive for in our titles is to make our games unique… different. To present a game that everyone will say “I’ve never seen anything like that”. So I would definitely go for “creativity” as the studio’s main strength. It can be challenging, because exploring all new ideas for each game means you have to start from scratch and have little to no re-usable assets / code. But that is definitely more interesting than iterating over and over around the same concept.

Some studios just specialise in a specific genre and then try to perfect it (which is a pretty good strategy to be honest). I don’t know why, but we just need to keep on exploring new ideas in the studio.

Matt S: You’re one of the most prominent developers across South America, and it’s been really great to see your company grow, and some of the others that are now emerging. Do you look to share your Chilean heritage through your games? Are there any particular examples you can point to?
Carlos B: Abyss Odyssey is definitely the game where we most explored Chilean culture and myths. It was a very interesting project since it allowed us to present some pretty unknown creatures and characters from Chilean mythology to the world. For example: “La Pincoya” is a mythical woman from southern Chilean folklore, and she is one of the three main characters you can use in that game.

Matt S: More generally speaking, as an emerging area of game development, what is it like working in game development in Chile and the broader South American market? Are there any particular challenges or opportunities that you feel are unique to your region?
Carlos B: The distance is the biggest problem. We’re far away from everything. Far away from E3 and far away from Gamescom. So it’s bad for buying air tickets! But you guys must have similar issues… Australia is pretty far away too. Chile is also a country that has developed enormously in the past years, but also very recently. It is also a relatively small country. So there are few experienced game developers, and they can be hard to find. ACE Team is currently the oldest game development studio in Chile and you could consider we are pioneers in the region. Game development is relatively new in Latin America, despite there being more game companies these days.

Matt S: Finally, when you’re not making games, what are the games that you’re playing?
Carlos B: There are three ACE Team members playing Control right now. Great game. I personally just beat Limbo after skipping it for so many years (what a mistake!). But more than anything I’m anxious to see the new Dark Crystal prequel from Netflix. I know it’s not a game, but the original movie has been a major inspiration for some of our titles (including The Eternal Cylinder). Very much looking forward to it.