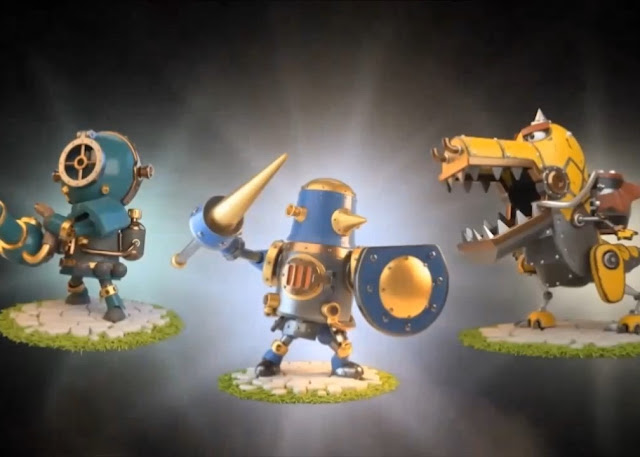 Machi Knights: Blood Bagos is an arena-combat based action RPG developed by Korean studio Cyberfront. It bills itself as a multiplayer Action RPG but falls a little short of that – with half-thought out mechanics, repetitive gameplay and not much value to offer for players.

The actual combat is functional but leaves a bland taste in the player’s mouth. There are three character classes to choose from – a melee, a ranged and a “support” class. Each one has three classes of weapons to use, but all are fairly standard: melee is about getting in combos and dashing out, ranged is simply holding a button down with good positioning and the support class does AOE damage – but is much better enjoyed in a team. Each class has its technical issues: melee makes itself vulnerable as there is no option to block, ranged can only lock on to the nearest target, and support really needs someone else to make their skills feel impactful.

Levels are repetitive and monotonous, and fall into the same patterns of killing a certain amount of enemies or surviving for a length of time. I cannot remember the details of any of the levels I’ve played. The bosses fare a lot better – I can see this is where the developers put most of their effort – but poor collision detection and very high damage outputs make these moments memorable but for the wrong reason. 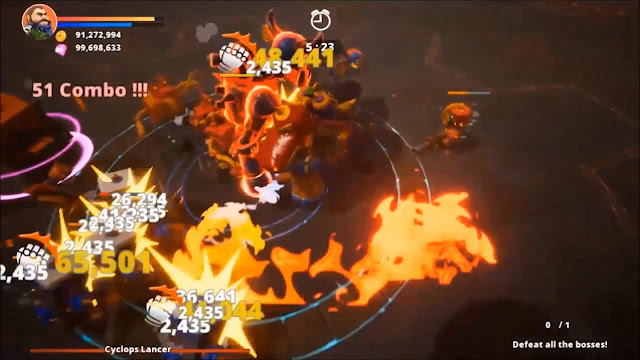 The game’s fun is unfortunately hidden within a bureaucracy of menus which obstruct a counterintuitive upgrade and progression system. On the character select screen, which is normally not shown to the player unless they exit the world map, you can hit a button to spend coins you’ve picked up within each level on character-specific numerical upgrades to health and damage. Meanwhile, gems you find by defeating big enemies can be spent to gatcha-spin for new weapons which have a chance of being better at outputting damage than your current options.

You’ll likely discover this menu in frustration after losing against one of the game’s difficulty spikes. Since there’s not a lot differentiating skillful and sloppy play through the game’s mechanics, the developers have seemingly implemented RPG-style avatar strength to allow for a sense of progression. Players will need to constantly upgrade their characters and roll for new weapons in order to keep up with the game’s difficulty curve.

Replaying levels is not too much of a chore thanks to the game’s four difficulty levels, although sometimes it can be hard to notice the difference between normal and hard. The problem arises when actually trying to develop characters: gold can be spent to upgrade one of the three robots, so if you want to progress at a reasonable pace you’re going to end up making one robot an unstoppable force and leaving the other two at Level 1. This is made even worse by the gatcha weapon drops which need to be purchased from loot boxes (as opposed to picking them up as random drops from the battlefield, which would have saved tons of menu time). These boxes can give you a weapon for any robot class, and since you’ll only likely have one class levelled up to a reasonable amount, that means only a third of weapon crates will be of use for you. The cheapest box, providing fairly useless loot, is 20 gems, while the most expensive is a whopping 500,000. Unwanted weapons can be recycled for some refunded gems so it’s not too much of a grind, but I’ll be honest, I didn’t endure long enough to have 500k gems to splash. 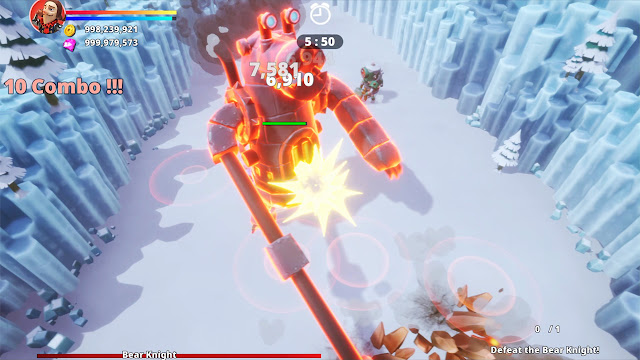 I did enjoy the graphics, which show off a wide variety of different blocky enemy types which have novel animations. The bosses in particular are huge and make their fights into a proper spectacle. Normal enemies are no slouch either, and the game is zoomed in enough to properly appreciate these. This made the game’s environments disappointing by comparison however – each level is drab with little detail, and it’s difficult to tell levels apart just because of how samey each of the twelve levels in a zone are.

Production values for other aspects of the game are unfortunately fairly low. The music is barely noticeable under the bombastic sound effects in the levels, but when you do notice, it is both forgettable and repetitive. The music which plays on the world map and upgrade screen is a measly twelve-bars long, looping on the same cymbal crash every fifteen seconds. The story is paper thin, told in text and sketched images on loading screens – but most levels have no story preamble at all, or say nothing meaningful with their snippet. Machi Knights does not take its story seriously as all – it’s not even present as an excuse for all the destruction.

Ultimately the thing holding back Machi Knights the most is that combat is unassuming and largely monotonous, and yet it’s really the only thing the game has to offer. Different weapon classes and sidearms matter little when most enemies simply walk towards the player or lazily lob projectiles; most battles peter out into mashing the attack button and sidestepping out of the way on occasion. There is the odd weapon that is fun to use, such a powerful beam from the Musket which incentivises pulling enemies into a straight line so you can take out multiple, but these are so few and far between, and they cannot on their own carry an over-long main game campaign. Machi Knights is theoretically a co-op game which puts the upgrade system into a little more perspective, I can imagine maybe they were going for an ecosystem where each player raises a different class to its max level to tackle the more difficult levels, but I genuinely can’t imagine convincing a friend to play this with me. 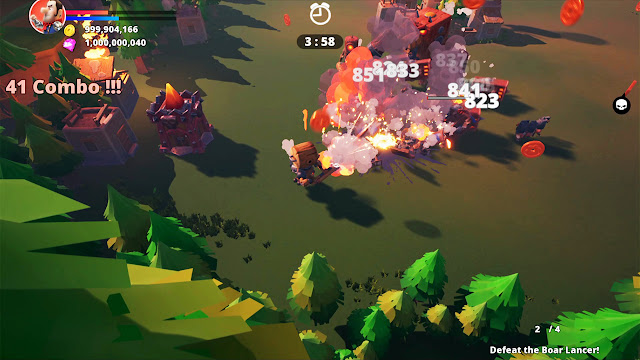 Machi Knights: Blood Bagos is often a game which grates in long play-sessions, and does little to set itself apart from other games on the market. This is a very hard sell for anyone who wants something more than a button masher, and even then, it’s hard to shake the feeling that you’re just settling for this game over a better use of your time.