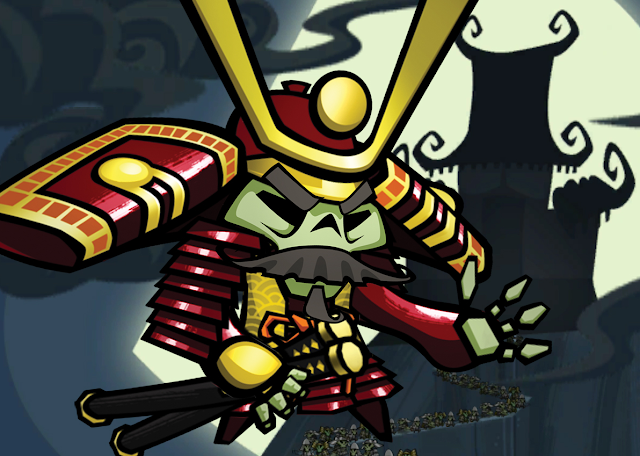 If multiplayer is so important to your game that it’s the first option that pops up on the main menu, then it’s not a good look if there is never a single match to find. Skulls of the Shogun has been doing the rounds on other platforms for quite a few years now, and it’s baffling to think that there would be much of an audience that would want to purchase it just to play on Nintendo Switch. Thankfully I don’t need to be baffled, as it looks like there really is no one playing in on Switch. I have not been able to find, much less play, a match since this game launched.

It’s not terrible, but it’s hardly a classic either. Skulls of the Shogun is a turn based tactics game in which you play as a skirmish-sized army of undead warriors, under the leadership of a guy that just wants to skip the queue on the way to hell. Yes, it’s one of those games – there’s not a moment that passes that it isn’t trying to be funny, but sadly, it comes across as try-hard. The single player mode has little cut scenes that throw laboured humour at the player, and while the concept of an undead Japanese army, fighting their way through the Japanese underworld, is an interesting one, the energy in Skulls of the Shogun starts and stops with its Saturday morning cartoon effort. That might illicit a chuckle or two, but nothing in there is memorable.

On the tactics side of things, Skulls of the Shogun does try and do a couple of interesting things. One neat feature is the ability to set up “walls” using units. By bringing a couple of your soldiers close enough together, they will form a “wall”, which means the enemy can’t easily move past or attack past them, nor push soldiers around. This is useful when you’re looking to protect archers or wounded units, or fighting in an area with a lot of cliffs and pits, because an enemy pushed off a cliff instantly dies. 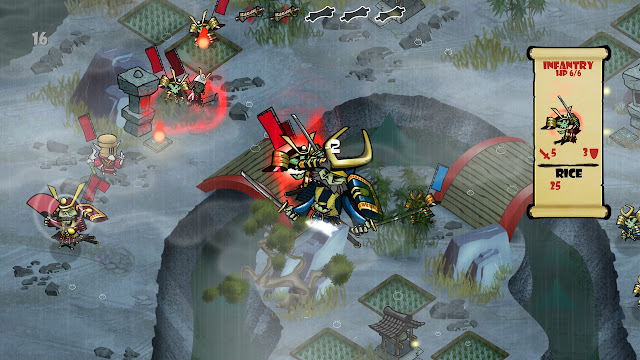 Tactically, it’s interesting, through it does lead to some “turtling”, where you’ll need to move units around solely to create walls, rather than use those units in a manner that is actually interesting. It also leads to clusters of units together, which is fine on a bigger screen, but when you’re playing on Nintendo Switch in handheld mode, it can be difficult to make out exactly what’s going on at times.

The other unique feature of the game is the ability to eat the skulls of your enemies. Each time you defeat an enemy, their skull will drop to the ground. On your turn, rather than have a unit fight, you can direct them to eat the skull, which will restore health to that unit. After eating three, the unit will also be “promoted” and become much more powerful. Of course, there’s a limit to how many of these skulls will be available, so you’ll need to be choosy about who you give them to. Furthermore, in the thick of a battle, there’s a great tension between the desire to power up your units, and the setback from having them out of action for a turn as they consume the skull.

Generally the tactical action is quite well balanced in Skulls of the Shogun, and there’s a good difficulty curve that will challenge you to master the game’s varied systems. At the same time, it’s accessible enough, and thankfully there are multiple ways to tackle most levels. I do prefer my tactics games to allow for multiple paths to victory, and in too many other indie tactics games there’s only one approach to a level that works. So the developers have got that much right. 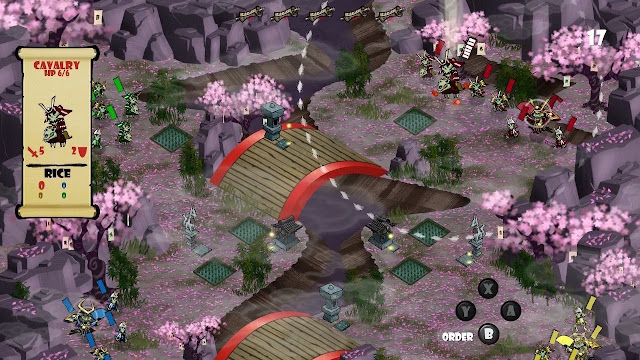 Nonetheless, I find it really hard to want to spend more than a few minutes playing Skulls of the Shogun at a time. The art is nice enough, though very uninspired, and the single player mode is enough in itself, even considering that the multiplayer scene seems dead on arrival for the Switch. I could do without the effort to get players to replay existing levels over and over again though – Skulls of the Shogun uses the old “three bonus objectives for stars” system that mobile games do to pad out the content, and this game isn’t intriguing enough for me to want to replay levels.

More than anything else, the Switch already has plenty of high quality and enjoyable tactics games for fans of the genre. Mushroom Wars is there for the accessible quick-play option, and for more tactical depth, there’s God Wars and the upcoming Fire Emblem. Lacking personality as it is, and with its main selling point – the multiplayer – being an apparent bust, it’s very hard to understand who would actually want to buy into this version of Skulls of the Shogun.