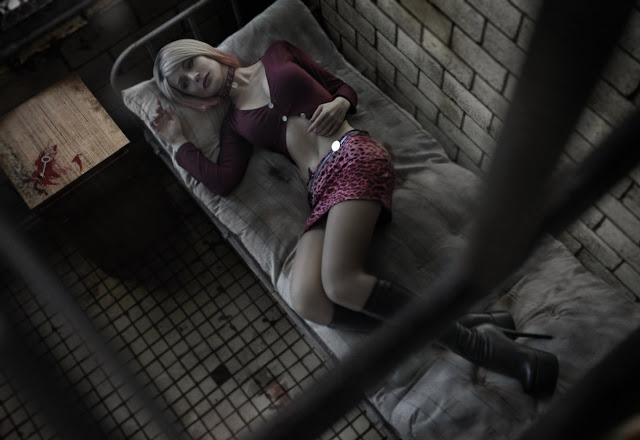 Horror games are far too sexless. This isn’t to say they’re bad – I love a good horror game and the intense chases and/or jump scares that it provides as much as the next person. However, the more I compare what has been achieved with horror in literature and cinema to what has been done in video games, the more I realise that horror game developers really struggle with the thematic depth, and I would argue that it’s as simple as this: horror needs sex, and too many developers miss that.

I’ve been playing through Lust for Darkness on Nintendo Switch, as it newly landed on the console last week. Having only been able to play it on PC previously, I naturally jumped at the chance to add it on console, as I prefer to play games that way, and while the port isn’t brilliant on a technical basis, it’s still serviceable enough to drive through its sublime erotic themes. In replaying its blend of Lovecraft and Eyes Wide Shut-style decadence, the game has reminded me of just how few other horror games are brave enough to make sex a core theme.

There are exceptions, of course. Lust for Darkness itself is the most obvious example of a game that brings the eroticism themes to front-and-centre, but last year’s Death Mark was able to shock people with some highly fetishistic imagery. Saya no Uta is a rare example of an adults-only erotic game that makes good use of the sex to build and convey its deeply disturbing horror themes. Agony was a terrible experience on just about every count, but it certainly delivered the link between the horrors of hell and Christianity’s fear of sex. Perhaps the best example of a true and genuine integration between sex and horror, though, is Silent Hill 2 and 3, which were both filled, wall-to-wall, with densely sexualised metaphors. Neither were overt in their depictions of their sex themes, but in both examples, the subtle use of sexual imagery and themes meant that both games worked on a literary and cinematic level that nothing else has achieved, before or after.

As far back as the PlayStation 2 with major projects like Silent Hill 2, and more forgotten efforts like Clock Tower 3 – a game that was metaphorically about a teenage girl’s sexual awakening – there have been a precious few attempts to recognise the relationship between sex and horror. This does seem to be increasing as the technology available to developers allows them to depict sex in a less clumsy manner. Sex is, without a doubt, the hardest thing for any creative team to attempt to do without stepping into a sphere of unintentional comedy – something ruinous to any serious effort at horror. Nonetheless, even with the additional power and improved graphical engines, such attempts are still fleeting and infrequent. Far more often, developers have opted to focus on the grotesque monsters, gunplay, and extreme violence devoid of any sexual context.

Why is sex important to horror, and why is the games industry’s inability to grapple with this topic to the detriment of the genre? It’s in the implied denial of the relationship between the two that the issue lies. By acting as though you can have one without the other, you’re denying much of the underlying potency of horror as a theme. Horror is about the body, and the way the body relates to the world. To deny sex is a part of the body is to have a limited and shallow understanding of the body and what motivates it. In kind, to deny that much of the human experience is pass on the opportunity of having the game having something say about humanity.

When you look at the horror genre, as fan example of entertainment, there are a couple of specific movements that led to what we understand today as “horror”. It started with the gothic, and stories such as The Monk, Dracula, and Frankenstein, and then split and started moving in a number of different directions, from the monster horror of cinema to Lovecraft’s cosmic nightmares, and the more recent slasher and psychological thrillers. In most cases, however (Lovecraft being the odd one out), sex has remained a core component across these genres.

That is because it offers the artists a way of explaining the unexplainable. As leading horror author, Clive Barker, once said: “very often, I need characters to do things which, under the right-thinking circumstances, they would never do. They need to walk metaphorically through a door into another world… and you’ve got to get the character to a place where the audience will buy it. Sexual desire is one great way to do that. It’s an important tool for me, if you’ll forgive the expression, a narrative necessity.”

Take for example the “dumbest” of all horror: the slasher. The slasher still has thematic depth and artistic value precisely for the sex themes. It’s a sub-genre famous for taking something from the “other” – a primal, violent, and unstoppable tormentor – and using it to off teenagers immediately after they have sex (or at times when they’re in the act). This has led to feminist criticism of the form, as academic, Beth Younger, notes: “For decades, sexually active women in horror movies tend to die first as punishment for sexual transgression. We see this in “Halloween,” “Friday the 13th,” “The Texas Chain Saw Massacre” and “A Nightmare on Elm Street.”” (Side note: it’s only in really recent cinema that horror has been able to find a feminist edge, and that still eludes video games to a very great degree). Nonetheless, it’s so core to the genre that a director can’t work within the slasher sub-genre without addressing with the need to have hot young things get their kits off and humping one another. It’s so critical to the genre foundations that these days, directors will use it in the context of satire, as an easy way to give the audience a knowing wink that they’re aware of the structure of the slasher and that their project is self-aware. One of the founding members of the slasher, Wes Craven, did that himself with the way he used sex in the Scream franchise, and made it one of the “rules” of horror that the cast laugh about before falling victim to Ghostface.

This link between horror and sex is in part visceral – it’s the fetishised penetration of a blade (or other sharp implement), into someone, and the link that creates between ecstasy of death. In other words, it’s aesthetic to the genre, as Georges Bataille noted in Eroticism: Death and Sensuality: “beauty is desired in order that it may be befouled; not for its own sake, but for the joy brought by the certainty of profaning it.”

Barker too, argues that Dracula was a response to the cultural taboos of Stoker’s time: “Look at ‘Dracula.’ It has a profound sexual subtext. He [Dracula] is going around biting these women and giving them spontaneous orgasms in the middle of Victorian society, which is not at all approved of.”

That the sex in horror is a cultural theme didn’t go away post-Stoker, either. It is not a coincidence that slasher horror emerged as a metaphor for “punishing” promiscuity just as young women were starting to take ownership of their sexual identity across the western world. Today, looking at the new wave of “intelligent” horror, whether it’s Black Swan, Get Out, It Comes, or any number of other films, the horror is driven from the the intense and complex relationships that people experience through modern life. Meanwhile, over with the goreporn genre, led by the likes of Saw and Hostel, the bloodletting is turned into fetishistic ritual and used as a metaphor for corruption among the elite and the “rape” that inflicts on its victims. These films are revolutionary in tone in the same way that Marquis de Sade’s books were both horrific and erotic as a revolutionary vehicle, and speak to an increasingly disenfranchised working class population.

All of the above applies to both literature and cinema, and yet when we get to video games, so much of this complex relationship between horror and eroticism is gone. Dracula isn’t a sexual being in the Castlevania games. He’s an end boss, or alternatively an anti-hero when you get to play as him. Much of the fetishistic undertones of cannibal and/or zombie films is lost when you get to Resident Evil, because now they’re just ugly monsters to kill as you run collecting ammo within haunted mansions (literal or metaphoric). Until Dawn was a generally effective homage to slasher horror, but aside from one laboured bath scene, and another nonsense underwear moment, it’s the most sexless example of the genre we’ve ever seen. Even Alien Isolation lost the maternal themes of the Alien movies, and while Outlast and its sequel did have the occasional moment of grotesque sexuality, it only did that in the service of depicting a violent depravity, rather than offer a particular view on eroticism.

Again, I’m not saying that any of those games are necessarily bad (well, with the exception of Outlast, which are terrible non-events). In terms of haunted house atmospherics and jump scares, video game developers have, over console generations, arrived at a deep understanding on how to make a thrilling, entertaining ride. Their ability to create the grotesque is unparalleled. However, as works of art, they’re thematically limited. Horror’s contribution to the arts is as an outlet to explore deep and ingrained socio-cultural fears, to transgress, and to break taboos. As a society we are most certainly not enlightened to the point that we are comfortable with sexuality, and it remains a point of both fear and taboo, and yet while films and the body of horror literature continue to engage with this on that basis, horror game developers continue to be preoccupied in throwing waves of ugly, bullet soaking monsters at us.

The more developers that we have that are willing to engage with sex in a meaningful manner, as Lust for Darkness does, the better for the genre. It’s not about throwing token sex scenes at players, or giving optional underwear or swimwear DLC. It’s about making the sex core to the narrative – and therefore the horror. That’s the next step that game developers need to take with this particular genre.