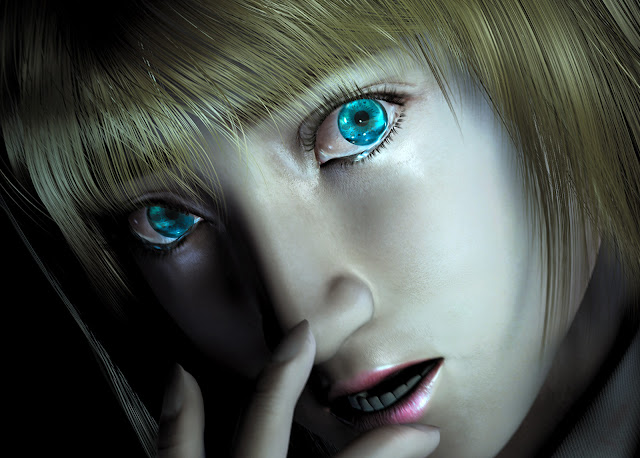 Unless you’re right into ultra-niche horror games, and have been for a while, it is very unlikely that you’ve played – or even heard of – Clock Tower 3. Released to little fanfare on the PlayStation 2 and doomed to immediate obscurity from middling reviews, Clock Tower 3 is nonetheless a real work of art, and despite its commercial failure, I do hope Capcom releases it on a whim as a PS2 title on PlayStation 4, because it really does deserve a second look.

On the more superficial level, it’s a game that, at the time, was really ambitious in its production. The game’s cut scenes were directed by none other than Kinji Fukasaku, the same legendary film maker that gave us Battle Royale (among plenty more). His involvement should be seen as thematically significant, too. Fukasaku was well regarded as a major figure in Japan’s fringe cinema movements; a genuine transgressive in his approach to his work. His films were dark and pummelling, and powerful and evocative as a result of that.

So too is Clock Tower 3 actually quite confronting. There you are in control of a young, vulnerable, 14 year old girl, decked out in a school uniform and physically average in every way, being stalked by a string of serial killers, many based on real-life murderers, and these villains are led by her grandfather, who has a genuinely incestuous interest in her. This girl – Alyssa – has no weapons nor way to fight back. Instead, she needs to run, and hide, and when she does so, you’re treated to a cut scene of her, cowering in a cupboard or behind a curtain, as the killer stalks back and forth in front of her hiding place. If you’re unlucky, he’ll find her. If he does, it’s probably game over.

There is an atmosphere of sexuality that pervades the entirety of the Clock Tower 3 experience. This theme is only overt in a few isolated instances, so I don’t believe it would be picked up as the reason for the horror by many people (or critics, at the time). It is designed to make you feel uncomfortable, however. Subtly, the theme builds through the game, and to unpack where the horror atmosphere within the game comes from (because there are few instances of extreme bloodletting by the standard of horror games), it is this theme. 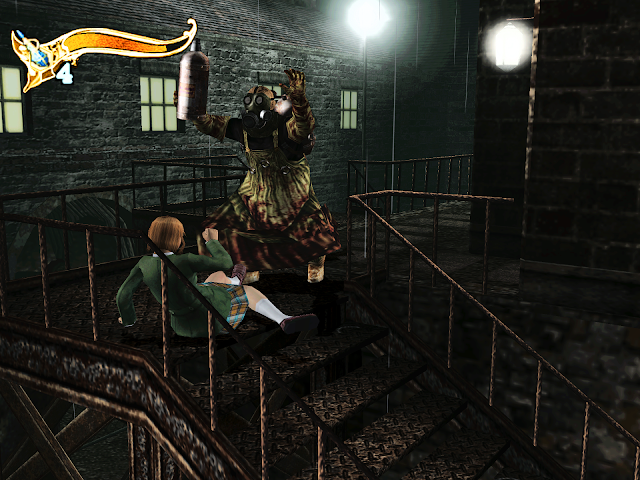 It’s also what makes Clock Tower 3 an artful game. It is at core a coming of age story, and the whole thing – from narrative to horror – works as metaphor for the development of Alyssa. At the start, Alyssa is innocent and comfortably secure with strong family bonds, so that she feels quite safe. Soon, however, she’s isolated, and pulled through the aforementioned nightmare gauntlet of serial killers, where she needs to learn to fend for herself.

Alyssa’s family mansion acts as a hub, from which Alyssa somehow ends up in a wide range of environments, each of which house one of the killers. The transition from the nomalacy of the mansion to these nightmare realms is dreamlike and clearly allegorical, and it’s no surprise that in each instance, Alyssa learns something about herself and her family from these environments and encounters. The environments are personalised manifestations of the coming of age experience, in other words.

Specifcally, these experiences tell a story of a Bildungsroman. A specific genre of coming of age, the Bildungsroman relates to the emergence of a sensitive, naïve person, after they go on a search for answers to major life questions, and as a result develop a much deeper and adult understanding of the world. The genre is characterised by the difficulty that the character has in reaching that point of maturity, and generally reflects the youth’s initial conflict with society, before coming to accept society and then becoming a part of society themselves. It is, therefore, a story of moral development as well as intellectual. Really famous examples of this story in literature include Catcher in the Rye and Harry Potter.

For Alyssa in Clock Tower 3, the story is about her coming to terms with her place in the world. In parable, she’s a “Rooder,” a special kind of monster hunter who is able to travel through history to purge the serial killer monstrosities. But she doesn’t realise the full extent of her power until she fights with her grandfather, who is himself becoming one of the monsters, and her now-dead mother gives her the power to put him to rest. It is at that point that Alyssa has come to terms with the fate of her family and her own role in the world, and emerges out the other end of the game with the new understanding of the world as a woman. 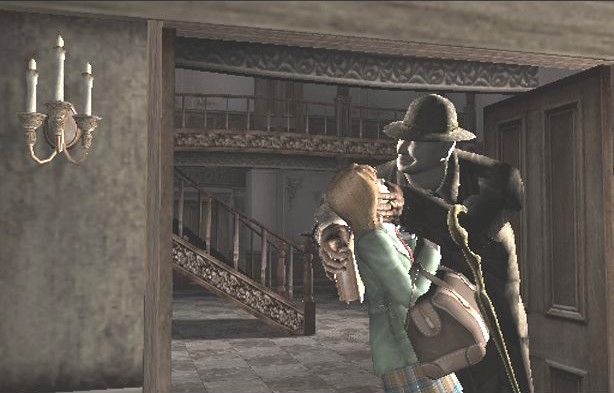 Critically, and metaphorically, by the end of Clock Tower 3, Alyssa is also awakened sexually. To become one of the monsters in this game, a being needs to kill a Rooder and consume her heart; an action that is presented in a fetishistic manner. In overcoming the threat that her grandfather posed to her, Alyssa is now keenly aware of the desire that others will have in her. That she has developed the confidence to make her own decisions – and resist attempts by unwanted individuals to take her – is a positive statement on her growing control over her own body; emphasised still further by the growth in her Rooder powers.

What does all of this have to do with Clock Tower 3 being a horror game? I would argue that coming of age stories are an almost perfect source for horror tales. Once you start digging into what drives horror, as a broad genre, the common, most critical thread, is that a good horror text should play on dominant fears of the society at the time in which that horror artefact is created. Horror, as a genre, is in a constant state of redefining itself. Where once horror was rooted in religious imagery and the consequence of sin against Christianity, by the time the 70s and 80s had come around, it was more focused on the sexuality of liberated teenagers – explaining how Dracula was able to give way to Jason Voorhees. Though there has always been a fear of science and technology by elements human society, and that has driven horror plots for eons, the fear that people felt with Frankenstein’s experiments made way to endless horror films about aliens as humans started to seriously consider the idea of travel in space. Now we’ve got all these horror artefacts about our utter reliance on technology for day-to-day life.

Within all of that, the coming of age process has always been one that has been the source of fear. The changes within the body and mind are extreme and can easily distress children, and parents naturally concern themselves about the erosion of possession that they have over their children. Stories that explore that emotionally powerfully and difficult time for children and their parents are stories that make for good horror experiences.

Back on the PlayStation 2, most horror games were far more explicit in their content than Clock Tower 3. You had monsters in Resident Evil and Silent Hill, where ugliness was the source of fear, and the thrill of the game was in confronting that fear head on. You had agency in fighting them, but the intensity of the combat, as well as shock scares, was designed to put you on the edge of your seat. More fringe games, like Project Zero, aimed to terrify by confronting the player. You had to let the ghosts get close to you in Project Zero in order to defeat them, forcing you to suppress that fight-or-flight instinct in it entirety. That is really difficult to do. 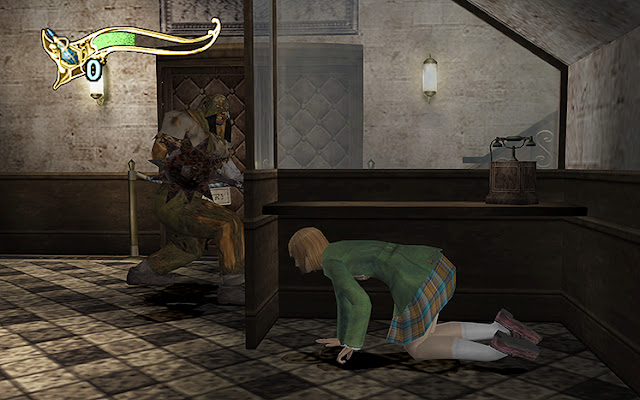 Clock Tower 3 was a rare example of a third kind of horror; one where you were asked to activate the “flight” response, all the while tempting you to keep pushing forwards in order achieve the ephiphamies that are so crucial to the Bildungsroman storytelling. It’s a more subtle effect, relying on players connecting with the lead character, and building enough empathy with her that her survival becomes important to them, and then placing her in situations in which, even when the danger is not immediate, it always feels like it’s not long away.

For those connected enough to Alyssa to care about the incredibly creepy situation that she finds herself in, Clock Tower 3 is intense, atmospheric stuff. The imagination runs riot and you find yourself twitchy for her, knowing that every time she opens the door Alyssa might be running from mortal danger seconds later, equally knowing that if she doesn’t open that door, the danger will come and find her anyway.

Capcom largely gave up on this kind of horror after Clock Tower 3 spectacularly underperformed on shelves, selling only around a quarter of what Capcom had projected. The developer took a swing at a game of very similar style in Haunting Ground after Clock Tower 3, but after that there wasn’t much from the studio. The legacy endures, however, and other games such as Outlast and Corpse Party do similar, but for my mind there hasn’t been a better game that has explored sexual awakening in a coming of age context as Clock Tower 3 achieved.

Please fill out our reader’s survey! Help us get even better!