Röki is a haunting upcoming indie

Are you ready for a game best described as haunting that isn’t horror? Because I sure am. The trailer for Röki alone has the title lingering in my thoughts; check it out here:

Röki is a narrative adventure game set in the ancient Scandinavian wilderness, where creatures from folklore roam free. It promises atmospheric exploration and puzzles that will leave you satisfied at the outcome.

The title is developed by Polygon Treehouse, which was co-founded by former Guerrilla Games art directors. More details should be released during E3 this week!

An E3 leak: the first Ni No Kuni will be remastered

Our editor-in-chief raved about Ni No Kuni: Wrath of the White Witch when it was released back in 2013 for the PlayStation 3, and who could blame him? He called it a genuine masterpiece, and I’m inclined to agree. Until now, the title has remained locked down in the previous generation of consoles, but its set to make a comeback. 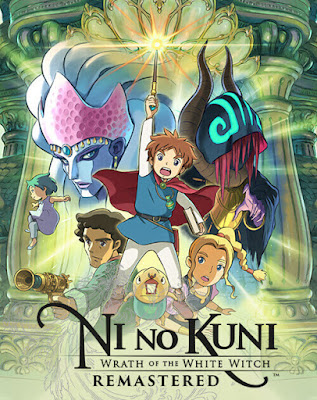 There were several leaks this weekend about Bandai Namco’s E3 titles, and one of those was for Ni No Kuni: Wrath of the White Witch Remastered. Yep, remastered. It will be released with improved graphics and performance for both PC and PS4. While a leak also states the game is coming to the Nintendo Switch, it doesn’t state that it will also be the remastered version.

The game follows Oliver as he tries to bring back his mother following a tragic accident. The story unfolds through animation storyboards by Studio Ghibli. Its RPG gameplay is familiar, and there are dozens of locations to explore, along with hundreds of creatures to battle.

Watch the new trailer for the next Kingdom Hearts III DLC

Perhaps the biggest take from the trailer is that Roxas, Aqua, and Riku will become playable characters. There will be a new Keyblade transformation form for Sora. Most importantly, there are some new stories ahead!

There are months to wait for this DLC, so now’s a great time to jump into Kingdom Hearts III if you haven’t yet; it’s available for PlayStation 4 and Xbox One.

EA’s Play press conference is already done, and from my perspective there wasn’t a lot to cover… except the indies. And the company announced three of them. First up was Zoink’s Lost In Random, a fantasy adventure from the studio behind Fe. The title blends strategy and action while set in a dark world.

Second is a co-op action-RPG titled RushHeart, developed by Glowmade. The game follows the player and their robot sidekick as they adventure through an alien multiverse. Oh, and there’s spray paint!

Last but not least is Hazelight’s unannounced title. Yes, EA announced a still unannounced title, which is just strange. Anyway, Hazelight is the developer behind A Way Out, so whatever it is, we’re interested. The title promises to “give players a fresh new take on the challenges of working together.”

The Friday Ten: The best fan service on the Nintendo Switch