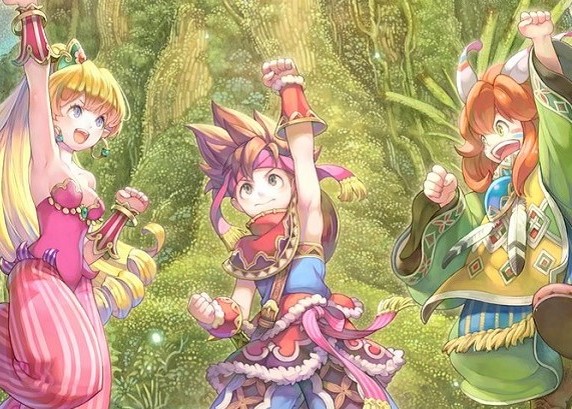 By the numbers, the Collection of Mana that Square Enix dropped on our Nintendo Switches as part of the E3 festivities last week is one of the most limited “retro packs” of all. Street Fighter had a dozen or so games, the SNK collection even more, and even Konami’s packs both have well over double the handful that are in Collection of Mana. On the other hand, Collection of Mana has Mana games, and as the wise words go, “quality rather than quantity.”

In the pack you get three titles. It’s led by Secret of Mana, the masterpiece and (by far) best known of this particular series. Then there’s the tasty treat in Trials of Mana, a game that has never formally been released outside of Japan before. Yes, this is the first time anyone who hasn’t been willing to dig in fan translations has been able to play it. Finally, there’s Final Fantasy Adventure which, despite the name, is a Mana title that was originally released on the Game Boy.

I have an close relationship with both Secret of Mana and Final Fantasy Adventure. Growing up, there was myself and my two brothers, and so, the three player feature of Secret of Mana made it feel like it was almost specifically designed for us. Local multiplayer has always been traditionally for two, or alternatively four players, so to have an experience tailored around three people was a novelty that was ideal for our situation. As a result, we played that game a lot over the years, and I’ve leaped at every opportunity to replay it since. Now, having that glorious original on my Switch is almost (though not quite) enough to erase the travesty of that remake from my mind.

Already on my second play through. This series has the cutest enemy design <3 #NintendoSwitch pic.twitter.com/uu5D0Ty9vI

Final Fantasy Adventure, meanwhile, was the single player experience that I could play to enjoy Mana when my brothers weren’t around for Secret of Mana. From way back as a kid I’ve enjoyed JRPGs more than just about every other genre, and as much as I enjoyed Link’s Awakening, the RPG elements of Final Fantasy Adventure hooked me in on a far deeper level. It also has the best Game Boy soundtrack, bar none. If there were any games that ripped through more batteries in that faithful brick of a console, I can’t think of them off-hand.

Obviously I didn’t get the chance to play Trials of Mana as a kid, so the ultimate value of this package was in being able to finally give that one a go, and while I freely admit that I haven’t played it all the way through yet (let alone with every character, because each has a Octopath Traveler-like introduction of their own), I am happy to say that this title, too, is of an exceedingly high quality, and it has been a treat at every turn to be working my way through this one.

Beyond the raw nostalgia of being able to play these classic JRPGs on my Nintendo Switch, the Mana series has always had such a strong environmental message, and if anything, the themes of these gems are becoming ever more pertinent as humanity draws ever closer to giving itself a climate change-driven extinction. For bright, colourful titles that feature cute little rabites, mushroom men, and goblins for enemies, the Mana series has always been more than willing to delve into some very dark places. The body count in Final Fantasy Adventure is intense, given how few words it uses to get there (and with grammar that is… fascinating… in a way). My first experience with Trials of Mana was to pick the female magic user for my first play through, and within half an hour, her mother (the queen) tells her flat out that she’s useless and she’s going to be ritually sacrificed, because at least then she’ll have done something worthwhile. 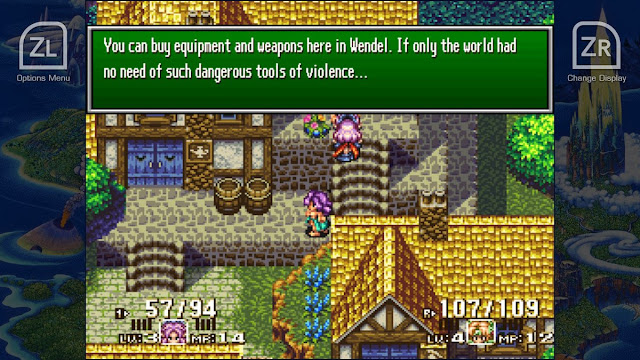 What’s special about Mana is that its unflinching environmentalism is enhanced by those darker themes. This is a series that operates on the fundamental belief that humans can live with nature in a symbiotic way, but humanity has a fundamental drive for power, and even more superficial things like comfort, that often cause it to become a drain on the planet. There were certainly JRPGs with deeper and more wordy narratives released on the SNES – Square’s own Final Fantasy and Chrono Trigger among them, but Mana achieves a lot with very few words, and to this day, the stories of these games have a hauntingly powerful message and warning attached to them.

As far as the porting to Switch is concerned, Square Enix turned to the best. Yep, M2’s handled this one, and it comes with M2’s customary skill. You’ve got a number of different screen options for each title, ranging from a true reflection of what the games look like (i.e. very small on the high resolution of today’s screens), through to a blown up version, which still looks good despite the pixelation, because the pixel work and animation in each Mana title is pristine. What is disappointing is how thin the extras are. There’s a music player as an option, which is nice, because the music in each Mana title is something special, but that’s it. The lack of gorgeous art books and other virtual museum memorabilia that we’ve become accustomed to in the other retro collections is sorely missing here, because these titles would benefit so much more from that stuff. The amount of lore, history, art and artistry that’s in each Mana title is a story that needs to be told.

I forgot how this game has the bestest Game Boy music everrrrr #NintendoSwitch pic.twitter.com/LIW1Bvpf9X

I’m also rather disappointed that Square Enix and M2 didn’t include the remake of Final Fantasy Adventure in this package. It was a good remake, which was originally released on iOS before being ported to PlayStation Vita, and it would have been a fun experience to directly compare the original to the remake. It also would have helped to make the package feel like a more comprehensive and complete collection. On the other hand, if Square Enix and M2 did do that they may have been tempted to throw that Secret of Mana remake on there too, and I’d rather never think about that one again.

These are gripes only because I’m such a passionate fan of the series, and I would go out and buy books on the Mana games if I could. I want those developer interviews and artist notes. I want to know where rabites came from, and see those original overworld sketches. That said, the fact is that Secret of Mana is to me what Chrono Trigger is to most people who were into JRPGs on the SNES, and Collection of Mana has been a truly wonderful trip back through my very fond memories for this series.

Puzzle & Dragons Gold is coming to the west