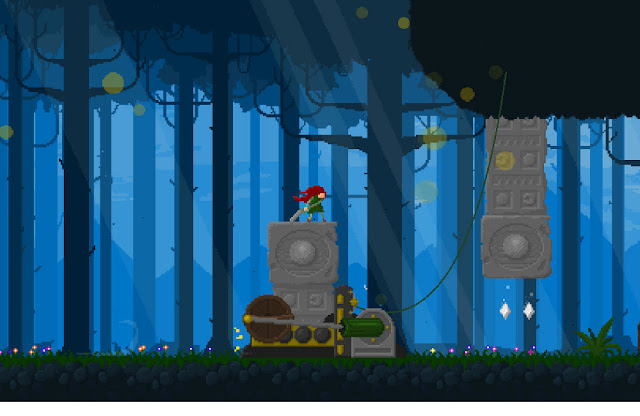 Mable & The Wood is not your typical Metroidvania. For one thing, you can’t jump, nor can you swing Mable’s hefty sword. But more significantly, all the upgrades—which are, I’d say, the thing that defines Metroidvania as a genre—are optional. You can, in theory, play through the entirety of the game with only the very limited pool of abilities you start out with.

When I say “limited”, I mean it. Despite being brought to this world by an ancient summoning ritual to bring about some world-saving prophecy, Mable is, physically, very weak. She lugs about a giant sword that’s far too heavy for her to even lift, let alone swing, so she’s confined to walking at a glacial pace as she drags the sword behind her. She certainly can’t jump.

What she can do, however, is shapeshift into a fairy. As a fairy, Mable can fly, but only for a second or so at a time. She also drops her sword wherever she is when she transforms, before it magically flies back to her hand when she returns to human form—cutting anything it crosses paths with along the way. In this way, fairy form becomes your main way of navigating the world and fighting the monsters you’ll encounter within it. 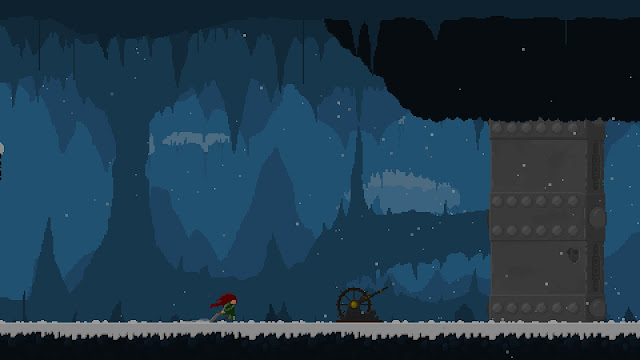 It’s inelegant, and takes some getting used to, but that’s to the game’s credit. Metroidvanias work best when you start out severely disempowered—it makes those incremental improvements in the tools available to you all the more meaningful. Mable & The Wood achieves this not by making the game especially difficult, but simply by making moving around the space a bit… awkward, at least at first. You’re going to misjudge “jumps” that would be a breeze in a typical platformer, and you’re going to whiff attacks as you get used to lining up those flying swords. You’re probably not going to die, but you’re going to feel a bit foolish. You’re going to feel like an alien in a body and a world you don’t really understand.

But once you get used to it—which doesn’t take long, all things considered—you’ll be moving through Mable & The Wood’s levels with ease and grace. Hitting an enemy as your sword flies back to you reduces the wait before you can transform again from brief to almost non-existent. Perfectly timed bursts of flight carry you from platform to platform without ever needing to stop and catch a breath, while your sword flits about to clear out any foes that dare cross your path.

That’s crucial because, like I said before, Mable & The Wood makes upgrades optional. Defeating a boss earns you a new shapeshift form, giving you new ways to make your way forward. The one boss in the preview build is the Spider Queen; kill her, and Mable learns to transform into a spider, able to throw her sword and use it as a grappling hook by way of a spiderweb. While it doesn’t have the free directional movement of the fairy’s flight, spider-Mable can travel much faster using the momentum of a swing. Spider form lasts much longer, too.

In that sense, having new abilities is certainly useful. Fairy form and spider form both have their flaws and their usefulness; some situations suit one better than another. Presumably, it’s the same for all the rest of the forms—I’m not sure how many there’ll be in the final build, but the UI has space for at least eight—and so collecting them all will give you more and more tools for navigation in that classic Metroidvania fashion. But so too can you try to make do with just your human and fairy forms, with all the added challenge that comes with that.

It seems that this choice won’t purely be about play preference or a desire (or lack thereof) for challenge—it also seems core to the story that Mable & The Wood wants to tell. The game opens, as so many games do, with a prophecy. The world is dying, and so a forest-dwelling cult invokes an ancient prophecy to summon a hero, one who will save the world by slaying the wood’s great beasts.

But where most games use a prophecy to launch an unlikely champion on their Hero’s Journey, Mable & The Wood wants you to question it. Can you trust the people who summoned you? Can you trust the words of an ancient prophecy, the origins—and motives—of which are lost to the mists of time? Is killing the “great beasts” the right thing to do, or are you just another human encroaching on the natural world for selfish reasons? Will fulfilling the prophecy save the world, or just hasten its destruction? 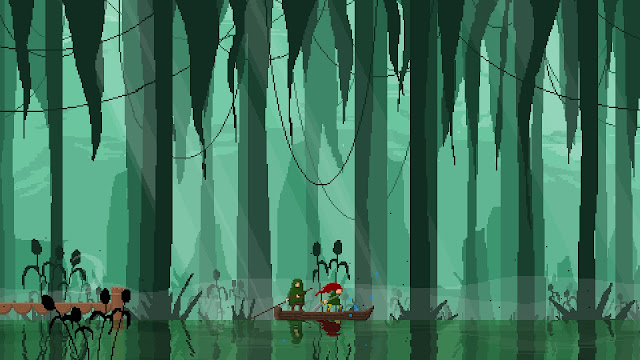 Even in just the space of a short demo, the seeds of these ideas—and the clever ways the game engages with them—are present. Even knowing from the outset that encounters are avoidable, there’s a lot of pressure to conform to the prophecy. All the obvious routes inevitably lead you to a fight with the Spider Queen; getting past her without having to kill her requires some creative exploration. The appeal of getting new powers can be hard to quell, especially when you get to trickier platforming sections that expose the weaknesses of the fairy form. That goes double if you’ve already played the violent way, and know how much easier a section would be if only you had the spider form.

I can’t wait to see how those ideas play out in the final game. Trailers and screenshots tease some exciting new abilities—like digging through the ground or freezing enemies and using them as platforms—which is exciting enough its own right. But more than that, Mable & The Wood looks to use the power fantasy inherent in Metroidvanias’ upgrade-based progression to question exactly that power fantasy, to challenge the violence that’s so common in video games, and to reject the determinism that goes hand in hand with any story that revolves around a prophecy. If the preview build is any indication, it’s in good stead to deliver on that.