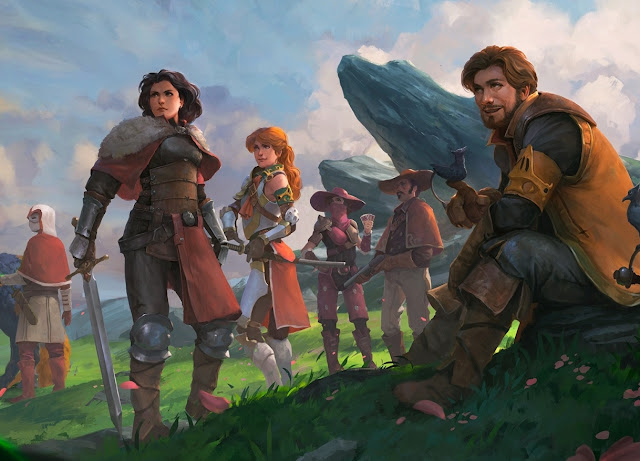 The tactics RPG is a badly under-represented one. Despite the enduring success of Fire Emblem, the historic popularity of Final Fantasy Tactics, the critical plaudits directed at The Banner Saga, and the genre hits like God Wars and Disgaea, there’s something about the genre that seems to make developers hesitant to give it a crack. There would have to be a dozen conventional RPGs for every effort at the tactics genre that we see. When they’re of the quality of Fell Seal, however, they are absolutely worth the wait.

What’s most impressive about Fell Seal is how committed it is to tradition. Right out of the box, there’s nothing in here that’s going to surprise existing players – especially those that have spent time with Final Fantasy Tactics. You’ll build up a small band of heroes, and, by carefully selecting classes for them, you’ll ensure that each character has a distinct skillset that allows them to contribute to the overall performance on the battlefield. Fell Seal isn’t that interested in having specialists – you’re encouraged to multi-class your characters almost immediately, and each character class can be mastered after just a few battles, meaning that you will be constantly tweaking equipment, party structure, and so on.

It’s important to get it right because, like with most tactics RPGs, you can only take a small number of units into battle, and enemy forces tend to be larger. You’ll also need to pay careful attention to your backups by developing a “B-team.” If a unit gets knocked out in battle, then they’ll come back (no permadeath here), but they’ll have an “injury,” meaning that they won’t be overly effective for the next battle. The only way to remove that injury is to rest them for one battle. So, as I was playing, I was very careful to make sure I was developing a “backup” for healing, offensive magic, physical combat and ranged sharpshooting, well aware that I don’t want to cripple my forces by having a key member out of commission for a battle. It’s a clever system that allows for consequence to losing characters in battle, without the crippling punishment of permadeath that the likes of Fire Emblem subject you to. 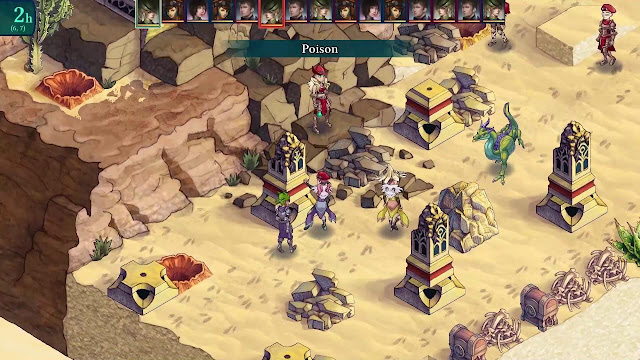 Fell Seal weaves a surprisingly compelling story, too – one that sucked me in without me really noticing it. There’s a world that is run by a council of ancient judges, who are not quite immortal, but age at a rate that is so slow, that the need to replace one only happens every century or so. That time has come at the start of Fell Seal, and a new councillor is selected through a fascinating process indeed. Each existing councillor selects a member to carry a “mark,” and each is set the task of undertaking a pilgrimage to a number of holy sites. The one that is successful at that becomes the new councillor.

Those who have the mark are above the law, to the great chagrin of a good “arbiter” (police force member), who witnesses a nobleman kill someone in broad daylight and in cold blood, only to find that the nobleman was granted a mark and therefore rendered immune to consequences for his actions. But then the arbiter herself gets a mark and can therefore start chasing after the nobleman… and get to the bottom of the dark circumstances on why that villain would be granted a mark in the first place.

I’m not even entirely sure why Fell Seal’s narrative has been so effective in pulling me in. Part of it is undoubtedly how well-written the characters are, and how they often subvert genre expectations. For example, necromancers and dark magic practitioners have a pretty bad reputation in video games. Even when they’re on the side of the heroes, they’re generally presented in a sinister light – doing the right things the wrong way, or reluctantly tagging along. I remember being surprised and impressed with the first Fire Emblem on the GBA because it re-purposed the character role of a dark mage to that of a scholar and all-round nice guy. Fell Seal has a necromancer who is also a healer (which, when you think about it, does make sense from a job synergies perspective), and… he’s a really interesting character. It’s amazing how taking a risk and breaking with tradition to give us different characters can make for great storytelling. I’m being sarcastic when I say that it’s “amazing,” because it’s really not. It’s basic logic and I wish more developers realised this. 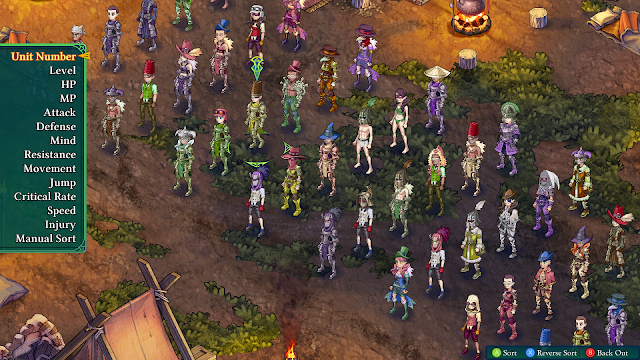 There’s an efficiency to how Fell Seal weaves its story. There aren’t hour-long cutscenes, nor is there copious amounts of lore to sift through. And yet, thanks to the layers of mystery and intrigue that cut to the core of the story, it never feels undercooked, either. The world around the characters is undoubtedly interesting, but it’s in the way that the story keeps you firmly in a mystery-solving state of mind that helps drive the narrative of Fell Seal on – much like an Agatha Christie novel can quickly move on from the setting and get on with the detective process.

As with most RPGs, Fell Seal is the epitome of the journey narrative, as outlined in Joseph Campbell’s The Hero with a Thousand Faces. As with most stories that belong to this literary genre, Fell Seal’s story closely mirrors the structure of Homer, classical mythology, folk tales and religious stories. As the Campbell summary goes: “A hero ventures forth from the world of common day into a region of supernatural wonder: fabulous forces are there encountered and a decisive victory is won: the hero comes back from this mysterious adventure with the power to bestow boons on his fellow man“.

It’s such a common trope for video games that we don’t think about it much, but Fell Seal’s simplicity in elegance in the way it depicts the journey of the hero, and the way that it associates it with the classical mythology and spirituality (the use of the pilgrimage as a narrative trope, the sacred nature of the temples visited while on pilgrimage that means they’re closed off to regular people), makes it a particularly good example for to look at how these kinds of stories are structured. But at the same time – and again demonstrating why it’s hard to put Fell Seal down – the game also finds ways to subvert expectations. The hero is a reluctant one (itself not an uncommon subversion for this kind of story, but nonetheless, enough of one that we naturally want to see how the story plays out). Meanwhile, the character you assume is going to be the principle antagonist turns out not to be. These are just two of the many small subversions that are woven into the simple, elegant, and traditional narrative of Fell Seal. Together, they ensure that you’re never allowed to become complacent with what Fell Seal is on about. 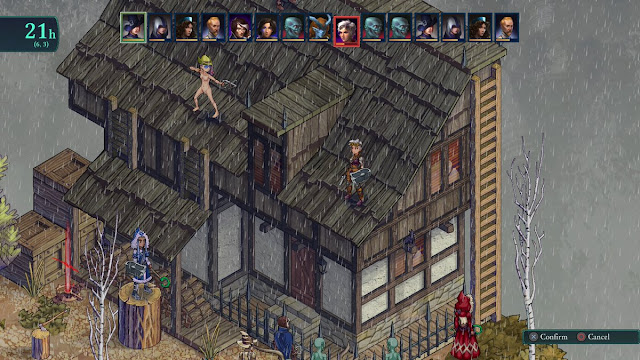 On the battlefield, things get even better. You’re going to notice, quite quickly, that Fell Seal’s battles take longer to play out than in many tactics RPGs, and that’s because there’s an elegant to-and-fro built into the system that means you’ll almost never be able to rely on raw power to get you through. Raw damage output it relatively limited, meaning that one-hit KOs are an unlikely possibility. Instead, you’ll need to choose your targets, find ways to isolate and flank them, and then systematically remove them, while at the same time making sure that your side stays healthy and free from draining effects. Fell Seal isn’t necessarily a difficult or unforgiving game, but it does challenge you to use the full range of your character’s abilities. That’s always the mark of a well-designed tactics game.

I’d also be remiss not to mention briefly the presentation, because Fell Seal is absolutely gorgeous. Character models are detailed and bright, and you can customise them with more costumes and variations than any other tactics game out there. Battlefields are nicely detailed and vividly imaginative, making each new one a joy to experience. Combat effects are restrained – and that’s not unusual for the genre – but enemy designs are creative, and really help to give the game an identity of its own. About the only issue I have with the presentation isn’t really an issue at all – there’s a distracting bug that means my archer character briefly loses all of her clothes when making a ranged attack. As in, she goes completely in the nuddy. Now I’m assuming that was not intentional by the developer… though on the other hand that bug works as a continuation of the narrative subversions anyway. Also she’s a good looking character so I’m not complaining.

Fell Seal came out of nowhere. That’s my fault because I don’t really follow Kickstarter these days, and that’s where this one got its start. But I’m so glad that I had the chance to play it. It’s the perfect blend of a classical, nostalgic love letter to the genesis of the tactics RPG, while at the same time offering just enough to subvert expectations so that even genre veterans will have trouble putting this one down.