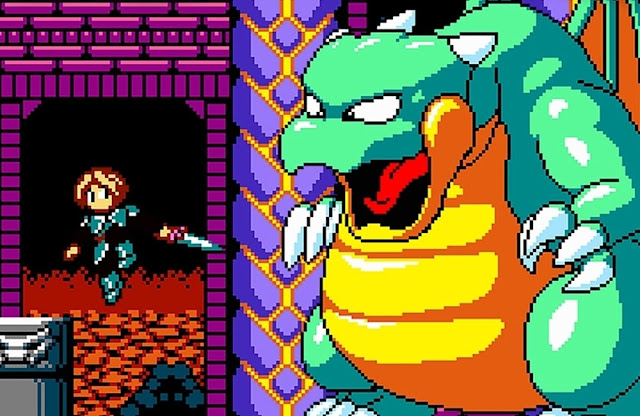 “Aggelos is the perfect combination of retro style and modern-day game design.” That bold claim is one of the main lines used in the marketing of Aggelos, but it’s one the game doesn’t entirely live up to. It’s got the “retro style” thing down pat—it perfectly captures the look and feel of a 16-bit action platformer, and wears its Monster Boy inspiration on its sleeve—but “modern day game design” feels like a stretch. It doesn’t lean into the brutal difficulty that a lot of other retro-inspired games do, but it’s plagued with outdated design choices that inject a lot of tedium into what would otherwise be a very enjoyable game.

In keeping with its 16-bit style, the story of Aggelos is simple and to the point: an evil villain has stolen the powers of the four elements and is trying to shroud the Kingdom of Lumen in darkness. As the only other person who can wield the elements, it’s up to you to save the day—but to do so, you’ll need to travel across the land, collecting the powers you’ll need to stop the bad once and for all.

With that brief bit of exposition out of the way before too long, the rest of Aggelos sees you journeying from place to place in a non-linear fashion, with each new area giving you some new tool, combat skill, or special ability that allows you to venture further out into the world. To start of with, you’re limited to just a simple swing of your sword and a standard jump, but it’s not long before you learn a downward plunging strike that can break previously-unbreakable rocks. Not long after that, you’ll discover the power of earth, allowing you turn glowing sprites (and enemies!) into platforms, allowing you to reach new heights in the game’s myriad platforming puzzles. By the end of the game, you’ll be teleporting through steel gates, throwing fireballs every which way, double jumping and dashing through the air, and swimming to your heart’s content. 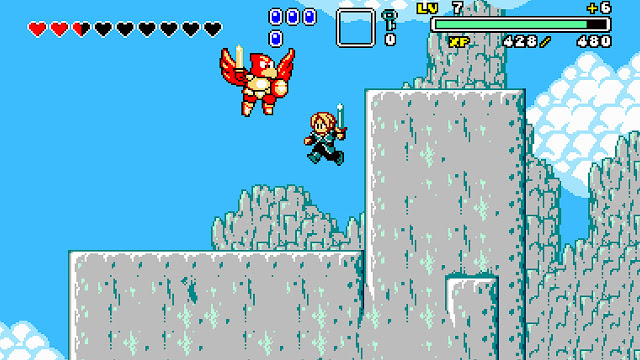 In other words, it’s a classic Metroidvania, though it lacks the one thing most “modern” such games have: a detailed map. Aggelos has a map that gives you a vague overview of the Kingdom Lumen and a rough idea of where each location is in relation to others, but it lacks the sort of room-by-room map that progressively fills itself in as you explore that’s been a Metroidvania standard since at least Super Metroid. The result is a game where it’s easy to get lost in labyrinthe cave networks, and where it’s hard to keep track of where you have or haven’t already been. You’ll frequently find yourself in rooms with telltale signs that there’s more to see if you come back later with more tools at your disposal—a chest that’s just out of reach, a locked door that you can’t open, a switch that you have no way of hitting—but there’s no way to keep track of those other than pure memory or having a pen and paper handy.

Aggelos solution, at least as far as progression through the main story goes, is to have an NPC available who will just tell you where you need to go next. It’s an elegant solution to a problem that was solved long ago; instead of having an incomplete map showing you where you’ve yet to explore—and, therefore, where you might find clues to your next objective—Aggelos gives you the option of either fumbling around in the dark or speaking to an NPC who’ll just give you the answers, removing a lot of the satisfaction of exploration.

That said, digging up the game’s plentiful secrets is a lot more satisfying, once you’ve backtracked around enough to have the level layouts embedded in your memory. With every new upgrade comes the chance to find ever-useful health upgrades, shortcuts, and occasionally new weapons and armour. Aside from the practical use of such things, it’s always a good feeling to be able to return to an area you’ve been before and finally be able to grab the thing that was out of your reach before, and that’s something that Aggelos delivers again and again. 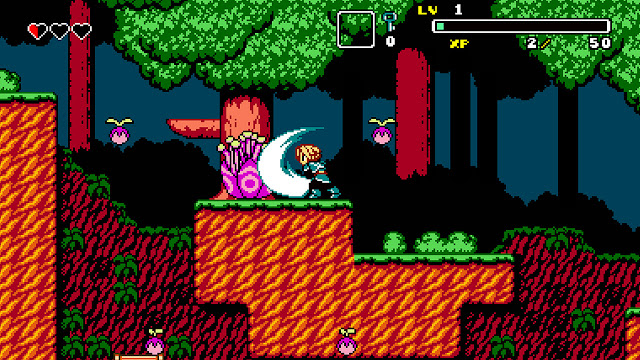 Naturally, combat and also plays a big role, but it’s here that Aggelos becomes its most tedious, particularly in the later parts of the game. Early on, combat is actually quite enjoyable—the controls are fluid and responsive, and the young hero is nimble enough to engage in the sort of back-and-forth with enemies that comes with the need to read and react to their moves. But in the later parts of the game, this takes a back seat to enemies who are just a nuisance to deal with: things with erratic movements that make them hard to land a hit on, foes that like to fling projectiles everywhere and knock you off platforms, and the like. Often enemies show up in groups that compound their problems, with dumb luck around enemy positioning meaning that the useful strategy for dealing with one type of foe puts you directly in the line of fire of another. If you’ve played any Castlevania games, you’ll no doubt be familiar with the frustration that comes with trying to deal with medusa heads—that latter half of Aggelos is that, but for basically every enemy you encounter.

Bosses are similarly frustrating, mostly because they seem to rely on one specific, often opaque strategy if you want to cleanly win the fight. One example is a giant spike-covered monster that marches from one side of the room to the other, but is too big to jump (or even double jump) over. At the point when you fight it, you would have recently earned the ability to teleport short distances by opening portals at the end of a fireball shot, making the obvious strategy to put portals on either side of the boss and then teleport through them as necessary. Only, this doesn’t really work—the portals only stick around for so long, they can’t be placed where the boss is currently standing, and he’s too big and too slow to be able to reliably plant portals where you need them.

What you actually need to do is use the downward sword strike to bunny-hop your way across the boss’s back. That particular attack is one that, by the time you’re fighting this boss, you would have learnt many hours before, and it’s one that has little practical application in combat until this one fight where it’s the key to victory. So you would have learnt that attack, used it to solve the puzzles immediately following it, and then never touched it again, making sure it’s not exactly front of mind when it comes to figuring out how to beat this particular boss. 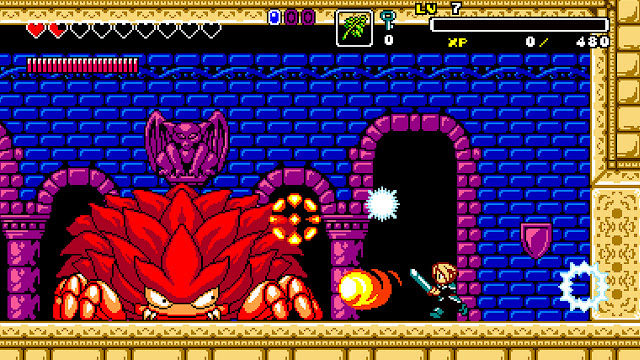 That’s probably the most egregious example, but most of the boss design is similarly opaque. Fortunately, you also have the option of just tanking the boss most of the time—just dodge the attacks you can, eat the ones you can’t, and as long as you’re sufficiently aggressive, the boss will run out of health before you do. That’s not exactly the most exciting way to play the game, though.

The other problem that arises, both from the bosses and some of the more trying platforming challenges that arise later on, is Aggelos’ annoying checkpoint system. When you die, you respawn at the last checkpoint, which is usually at the beginning of whatever part of the map you’re in—so if you’re at the end of a level or trying to beat a boss, you can expect at least a little bit of time wasting as you navigate back to where you were. But the bigger problem is the fact that any items you used before you died remain lost, forcing you into some far more extensive backtracking if you want to replenish your stocks and go into the challenge fully stocked. It’s one thing to fight a boss, die, and then return to the boss to try again; it’s something far more tedious to fight a boss, die, then have to find your way back to a shop to buy another potion—you can hold only one at a time—just so that you can start your next boss attempt with the same resources to hand that you had the first time.

It’s these things that take Aggelos from being a truly enjoyable throwback to games like Monster Boy to being a cute but tedious, sometimes frustrating experience. It’s not overly difficult (unless you accidentally start your first game in Hard Mode, as I did…), but some of its design elements seem to exist solely to inject tedium into the game. At least it looks the part: Aggelos colourful pixel art and lively, adorable enemy designs are a delight to witness. If you can put up with its more archaic elements, the retro style, creative level design, and wealth of upgrades to uncover might make it worth your time—but I wouldn’t go as far as calling Aggelos “the perfect combination of retro style and modern-day game design.” 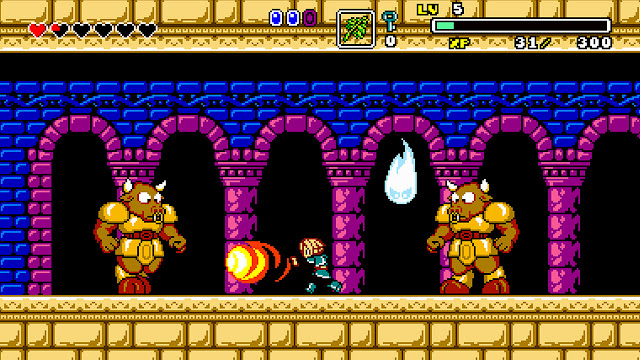 Note: At the time of writing, there’s a game-breaking bug in the Switch version Aggelos that makes it impossible to get past a certain point in the game. The developers know about it and are working on a fix, but it’s worth keeping in mind if you decide to buy the game before the issue is patched.

Community is key in Life Is Strange 2, Episode 3 – Wastelands