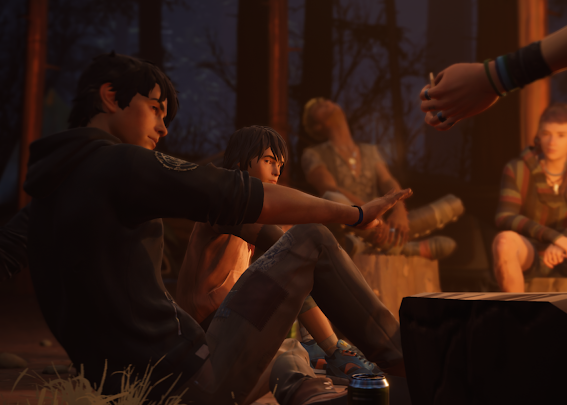 The wait between the second and third episodes of Life Is Strange 2 was a reasonable length; it feels like I just finished the second episode, Rules. But truth is, that was back in January, and so I always welcome the recaps at the beginning of each new episode. Each one reflects on past events as though they happened to wolf brothers rather than human ones. Wolves have been the brothers’ spirit animal since the beginning, and it’s a lovely nod to their history.

A quick warning before I proceed: there will be spoilers here, both from past episodes and the third one, Wastelands.

Related Reading: Catch up on Life Is Strange 2 with my thoughts on the second episode, Rules.

Wastelands begins three months prior to The Incident (as I’ve come to call it) with the police in Seattle. It’s a normal day. Sean and Daniel are arguing over normal brother things, in this case a watch. Their dad reacts like a normal parent would. It’s a normal they will never have again, creating a pit in my stomach before we return to the present day. 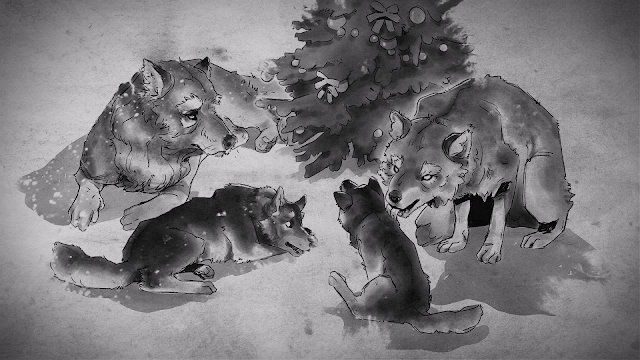 Sean and Daniel had to run from their grandparent’s home at the end of the last episode, jumping on a train to travel south. Beaver Creek is far away, both figuratively and literally. We sneak up on Sean sleeping in a tent, clearly in a warmer climate due to his attire. The watch he argued with Daniel about is tossed carelessly on the tent’s floor. I love the slight mystery this creates, as Sean could be just about anywhere south of last episode.

But there’s good news: Sean and Daniel found friends. Through the journal, we learn that Sean and Daniel bumped into the hippies from the Christmas Market. Cassidy and Finn invite the brothers to live and work with them at an illegal weed farm. The farm also employs a handful of others, including a couple from overseas. Sean and Cassidy are adorably flirtatious from the outset, gently brushing against each other and leaning into one another.

It’s here that I get a weird feeling in the pit of my stomach. Southern US states. Illegal weed farm. It can’t be… but it is. I check the map. We’re in Humboldt County. Now, any true crime buff like myself has seen Netflix’s Murder Mountain series, and if you haven’t, you absolutely must. The county has a terrible problem: people go missing and either never turn up, or turn up dead. Humboldt is incredibly dangerous due to the cannabis industry, enhanced by the fact workers tend to be drifters that may not even be reported missing. The missing issue is even featured in this episode. My heart is racing. The brothers are in immense amounts of danger but they think they’re safe with friends. The danger is clear when the journal states their bosses are Merrill the owner and Big Joe the goon. A word to the wise, never work anywhere with a hired goon. 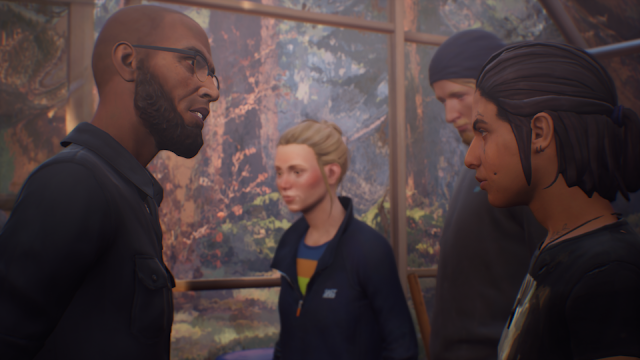 The problem is, money is good in illegal drugs. If it wasn’t, nobody would work to farm and distribute cannabis. In a month, Sean and Daniel have managed to save nearly $1500 and are about a month away from having the cash they need to get to Mexico. It seems so simple, so reasonable, to work two months and be able to flee the country for good. Seattle seems so far away now, but the police are clearly onto the brothers.

Because I know of the dangers associated with the illegal weed farm they’re working on, my choices start out as more cautious. I don’t want to ruffle feathers. I want to get in, do the work, and get out. Except… there’s Cassidy… I’ll follow my heart over the rules, unfortunately.

Sean and Daniel’s relationship has changed since they first fled, and even since last episode. You can see and feel the tension between the brothers; it’s practically written across Sean’s Face. Daniel has been acting out because he’s reasonably jealous that Sean’s new friends take up all his time. They used to spend so much time testing and improving Daniel’s powers, but they haven’t even done that one since coming to work at the farm. 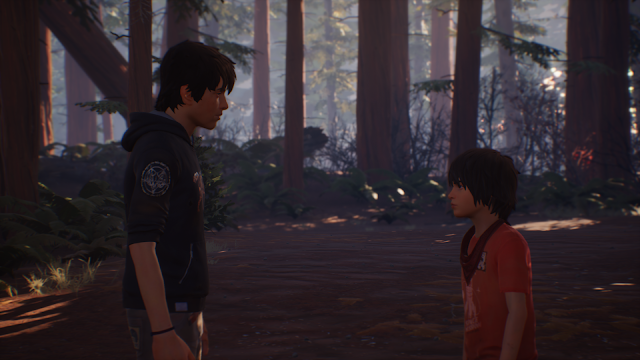 And work you will. Really. There’s an unexpected weed-trimming minigame where you pull the triggers in rhythm to cut, every now and then rinsing your scissors. It is mostly a way to deliver a lot of conversation without boring the player, I think, but I enjoyed it anyway. You learn a lot about the others while trimming.

This episode is entirely about connection. Connection to the land is there slightly, thanks to being surrounded by mighty redwood trees, but connection to people is what really matters. Rarely is a game about listening rather than doing, but this episode takes that idea and makes it incredible interesting by introducing a wide variety of characters from different places and with different experiences. I can imagine gamerzzz may be upset that Wastelands is all talk, no action, but I found it a welcome change from games that are go-go-go.

But there’s a problem brewing behind the friendships. Daniel’s powers have been growing. He’s been practicing while Sean is busy. But he can do scary things now. They will have to be extremely cautious moving forward, but I’m not sure nine-year-old Daniel fully understands the consequences to his supernatural actions. 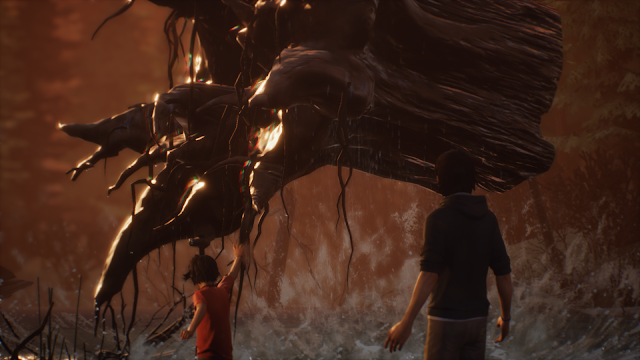 At the centre of the episode, D.A.N.C.E. by Justice begins playing, providing a perfect mid-episode pick-me-up. This is one of three pivotal moments enhanced by music; I’ll be sure to point out the others.

And then, as quickly as the uplifting music starts, it is back to the bad. Daniel acts out, making your boss fire you and revealing his powers to some of the other workers. This really isn’t safe anymore. We need to get those brothers out of there ASAP, folks, but can we?

Finn comes up with the brilliant idea to rob the boss using Daniel’s powers. Uhhh…. no? You can’t just steal cash from drug lords.

Amongst all the drama, there is a scene with Sean and Cassidy in a lake, swimming drenched in the moonlight. It mirrors an early Max/Chloe scene in Life Is Strange, while also reminding me of Tidus and Yuna in that lovely calm water under the moon. Another perfect music moment happens, this time with Ben Lee’s I’m Willing. 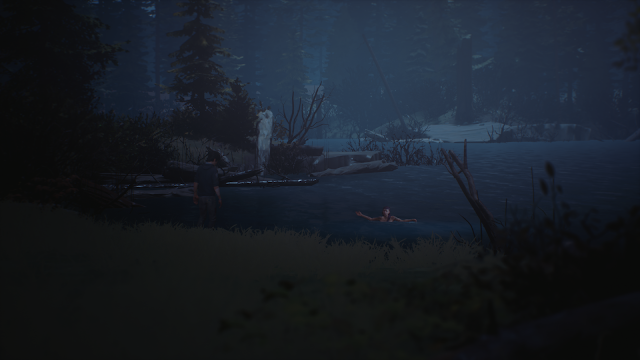 But romance got in the way, and Finn and Daniel are no longer around the campfire when Sean and Cassidy return from their little love session. I knew it was a risk. But I had to take it. I think I may be personally be in love with Cassidy. Oops.

What happens next makes me so anxious. I won’t spoil the episode’s ending, but I do need to say a couple more things.

Related Reading: Look back further in Life Is Strange 2 with my full review of the first episode, Roads.

I’m so rule-obsessed that I had breaking rules, even in video games. This episode forces me into it, from growing illegal plants to hotwiring cars. Being a rebel must be exhausting. By the end of the episode, Daniel has caused a massive amount of destruction, risking several lives including those of him and Sean. Perfect music moment number three happens here, at the end of the episode, with Natalie by Milk & Bone.

I can’t see Sean and Daniel escaping from the situation they’ve created in Humboldt County, but since there are still two episodes remaining they must find a way to escape yet again. Episode Four will launch on August 22, with the conclusion coming on December 5.