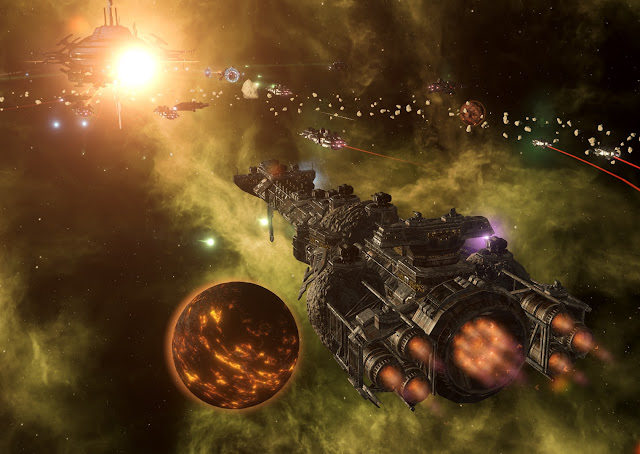 One of the features that people don’t talk about much with regards to strategy games is the stories that they tell. After all, between the mathematical balancing of the spreadsheets that power them, the layer upon layer of interlocking systems that determine diplomacy, scientific discovery, the outcome of war and cultural development, and the scope that these games tend to have, it can be easy to push consideration for the storytelling element right to the background.

But to me, the best strategy games are also great storytelling experiences, and Stellaris tells a cracking yarn.

As a kid I wanted to be an astronomer, and it was the idea of exploring new planets and – potentially – meeting new intelligent species that was the draw of it. When I realised that humanity taking to the stars in any meaningful fashion is well beyond the scope of my lifespan I gave up on that dream, but of all the science fiction that I’ve watched and played – be it Star Trek or Battlestar Galactica, Mass Effect or No Man’s Sky, it has always been that moment when intrepid explorers arrive at a new planet, and the potential for what they might see or do down there, that has captured my imagination. 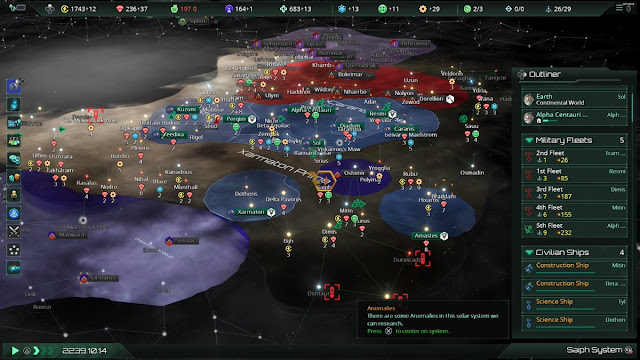 Stellaris is that experience distilled into a 4X strategy. To grow and expand your galactic empire, you need to send scientists out to explore systems. Perhaps they’ll find a new habitable planet. Or perhaps they’ll bump into a harmless and placid space squid that will float on out of their way. Just as likely, however, is that the scientists will run into hostile aliens (that operate much like barbarians in Civilization), or other species – and when they do encounter another species, once both sides have figured out how to communicate with one another, the diplomacy starts.

As you find new habitable planets, you can send colony ships over to start a new community. As you do that the borders of your empire will grow. You can also “claim” star systems that might not have habitable land by constructing frontier outpost to orbit that system’s sun. As you meet more species, even if you form friendly bonds with them, you’ll be scrambling to maximise the size of your empire before they can envelop you and lay claim to all those resources first. And, if it does come down to war, there is a wide range of ships you can build, and weaponry you can research to power your forces up.

What’s most impressive about Stellaris is the stories that it encourages you to write in your mind as you play. I created a couple of semi-autonomous sectors to manage planets and systems that I didn’t want to waste my time managing. I would then drop into the data view that told me how these sectors were getting along, and these sectors all start to take on distinct “personalities”, even though there was no overt storytelling to create this. For example, my southern sector was sitting right on the border with an increasingly belligerent opposing faction, and I started to see it as something of a “wild west”, in direct contrast to a northern sector that stared a stable border with a friendly empire. That sector was producing a great deal of material, but was always facing a negative food balance. So I had in my head an image of a starving, polluted, slum of a region, and the wealthy magnates that must rule that area with an iron fist. 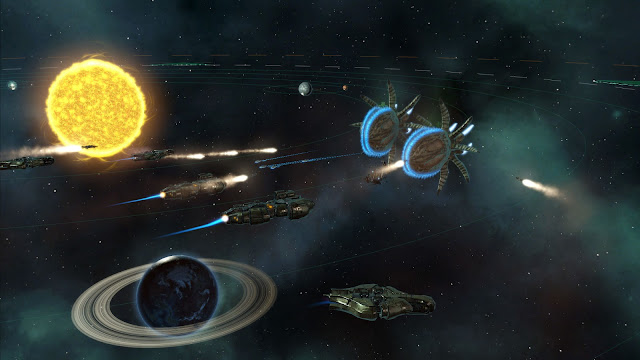 Overt storytelling occurs in Stellaris, too. Science vessels will frequently come across “anomalies”, which they can research and will always result in some kind of story. There are also larger sub-plots to follow along, such as discovering the ruins of an ancient empire across a number of different systems, and needing to research it all. Space is a strikingly beautiful, but cold and unwelcoming environment. The storytelling side of Stellaris help to shield it from becoming to mechanical and dry for its own good, and I found myself fully invested in the experience every time I picked the controller up.

Functionally there’s so much standard 4X stuff in there. There are three different streams of science that you can research. You need to consider how happy your people are, else suffer declining productivity – particularly in the far flung regions of your empire. You can recruit leaders to improve the performance of your planets, systems, and militaries, but they can get old and die, and, of course, you need to juggle competing resources. You need power to craft the mines that give you the resources to make improvements to your empire, which in turn requires a power upkeep. You need reputation to recruit new leaders and keep the population in line, but the more you expand your empire with frontier outposts, and the more that you make certain friendly arrangements with your neighbours, the more quickly that resource depletes.

Managing conflicting interests and resources is standard for the genre, though Stellaris does perhaps go a little overboard with it, to the point that it feels like micro-management. The main problem is that most of the new buildings and mines that you create only add to the overall resource-generating pool in incremental amounts (at least, until you’re deep into the science tech trees), so the sense of progress can be buried under what feels like endless busywork. 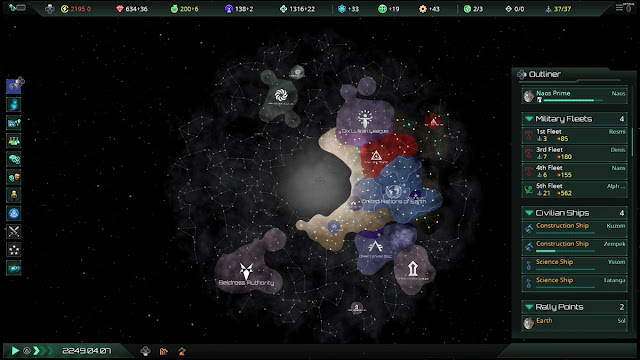 Diplomacy and trade also come across as a little limited, and the victory conditions aren’t as interesting as in something like Civilization. In that game, you can easily win without conflicting with all the other nations, because there are options to win through focusing on cultural or scientific development. With Stellaris, all the victory conditions seem to be trying to push players into as many open conflicts as possible. There are plenty of victory conditions, and you are rewarded for forming federations with other empires, but at the same time you’re all-but required to designate other cultures as “rivals” and move toward inevitable war with them.

Nonetheless, Stellaris is an aesthetically beautiful and rich in storytelling, and I’m fully enamoured to it. It plays beautifully on console, and it’s the kind of game that’s impossible to put down once you start playing. Paradox Interactive and Aussie developer, Tantalus Games, did a brilliant job bringing Cities: Skylines to console, and the duo has backed that up with Stellaris. Give me Europa Universalis IV next, and I’ll have all the strategy gaming I’ll ever need on my consoles.